The life cycle of a donut 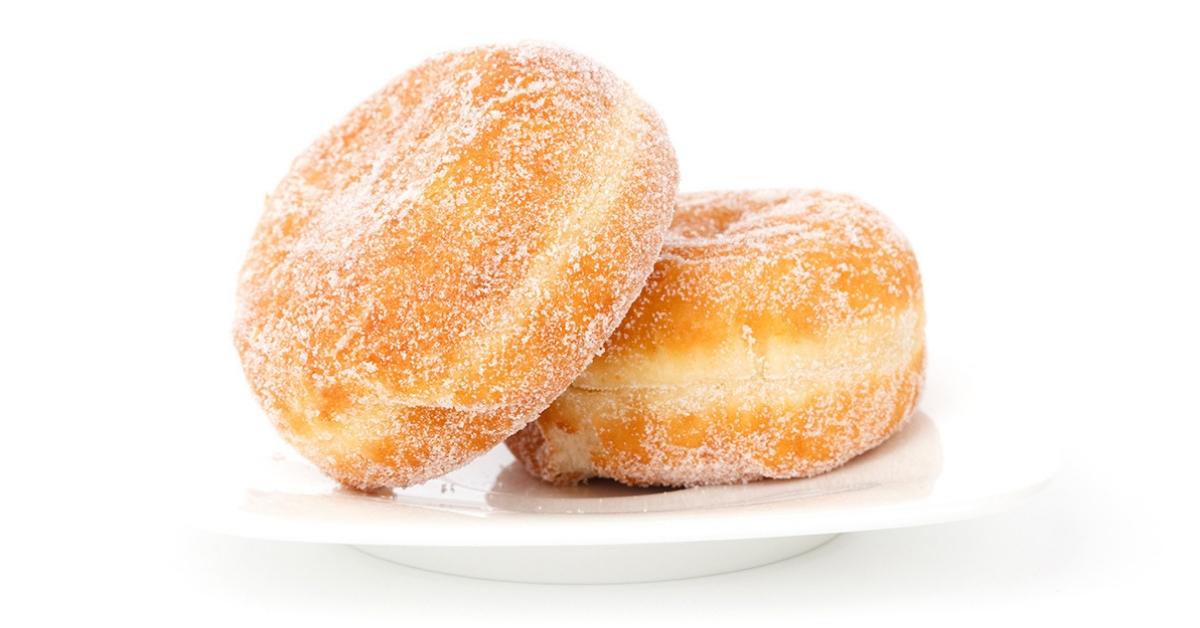 It’s a sprawling convention center vibrating with activity, but a small, dense crowd has gathered in a distant corner. The object of their fascination is a baker, separated from his onlookers only by a thin piece of clear acrylic. He spreads a large circular sheet of dough and, using a round steel cutter, carves out discs just big enough to sit comfortably on an open palm, but with a hole in the middle.

As he finishes up, someone else brings up a tray full of more discs, presumably from an earlier batch. These ones are plump, having risen over time and one by one, he drops them into a vat of frying oil. Though they soak up the liquid, they don’t sink, looking like small doughy lifesavers floating on a sizzling sea of fat. Once golden-brown, he fishes them out and sets them on a drying rack to cool.

Here, the donuts, dripping in grease, wait to be glazed.

The seeds of a serious problem

The life cycle of a donut begins in farms and fields, way before a baker mixes his dry ingredients with his wet ingredients.

Most frying oils are sourced, industrially, from seeds: sunflower, rapeseed, corn, peanuts, soybeans. After harvest, seeds are dropped in between large steel rollers, which crush them into smaller pieces. From here, the flakes pass through the barrel of what is called a screw press. Aptly named, this machine uses a screw-like shaft that constantly grinds through the cylinder, its ridges squeezing out raw, unrefined vegetable oil.

While this process is highly effective in drawing out most of the seeds’ oil content, some are still left behind in the pulp. These are extracted in a following washing step, eventually joining the rest of the batch downstream.

The crude product then undergoes a series of cleaning steps, both physical (with filters and steam) and chemical (using sodium hydroxide or other caustic agents). “Refining makes the crude oil edible, because as a crude extract it’s still foul,” says Florencio Rodriguez, Product Design Supervisor at Oleofats, Inc. “Only after it is refined can it be used for cooking,”

Depending on the client’s specifications and needs, manufacturers may choose to divert a specific volume of the processed oil into a different reactor. Here, the extract is bombarded with hydrogen gas as nickel pellets are dissolved in it, which help to move the chemical reaction – known as hydrogenation – along.

This, unfortunately, is where the problems start.

Fats, at least in a strict chemical sense, fall under the broader category of lipids. In this class, fats are solid and its liquid counterparts are called oils. Both are, however, very chemically similar.

Loosely, the smallest and most foundational unit of a lipid is called a fatty acid. (Because the group is so large and so diverse, it’s difficult to speak in absolutes). These are tiny amphipathic molecules, meaning they have two main parts: A water-loving head on one end that gives way to a long, wiry, water-hating tail. It’s rare, in nature, to find a free molecule of fatty acid on its own. Instead, it’s typical for three such molecules to lodge their heads into a single molecule of glycerol, which functions as a dock, keeping the fatty acids safe and stable.

The result is a water-insoluble complex called a triacylglycerol, more popularly known as a triglyceride. This primarily serves as a nuclear reactor of metabolic energy. In massive numbers, they manifest as a very generous waistline.

The tail of a fatty acid molecule is a key determinant of its characteristics. It consists of carbon atoms strung together, end-to-end.

Picture a set of beads linked to each other by a single piece of wire. When oriented this way, the fatty acid molecule is described as saturated. When at least one pair of beads is connected by two wire segments (a double-bond, in chemistry parlance), the entire molecule is said to be unsaturated.

This tiny difference scales quickly. Because of how atoms and chemical bonds work, unsaturated molecules are bent around double-bonds, disallowing efficient organization within a confined space. This makes unsaturated fatty acids generally liquid at room temperature. Saturated fatty acids, on the other hand, are straight in conformation and can stack easily, forming solid matrices.

So, as the extracted vegetable oil flows out of the reactor, it will have been changed in composition. High-energy hydrogen atoms will have ripped most of the double-bonds apart, opening up the fatty acid chains and stretching out the kinks. From being mostly unruly and unwieldy, the extract is now full of disciplined, linear, functionally versatile unsaturated fatty acids: a special type called trans fatty acids, or trans fats. 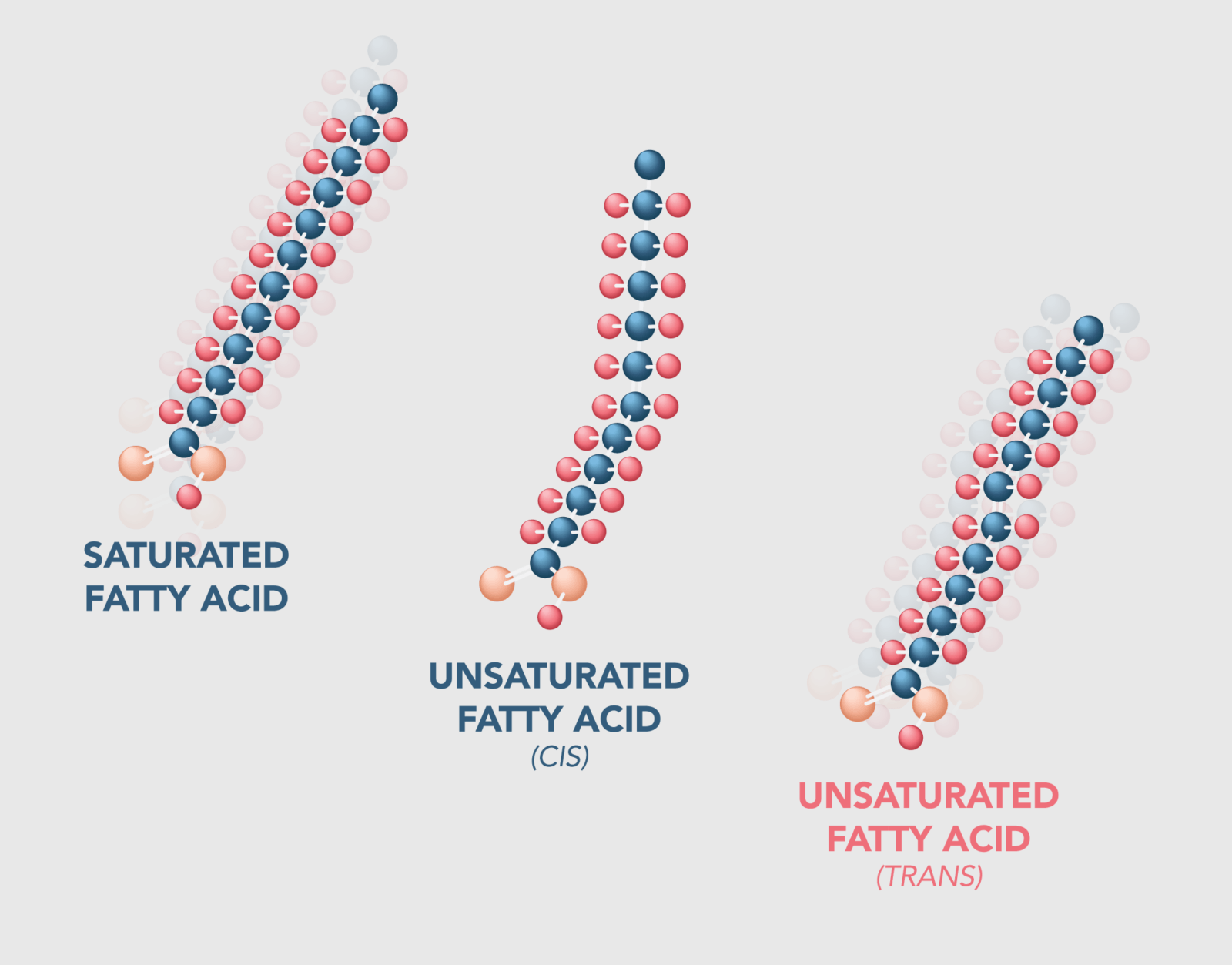 This oil is made for frying

“If you use oil that isn’t hydrogenated for frying, you’re going to come up with an oily product. It’s not going to taste good. It’s going to taste as if you’re just eating oil,” said Rodriguez, referring to donuts as an example. As it turns out, hydrogenated oils – those that most likely contain trans fats – are what make donuts crispy and creamy.

“It’s not just donuts that use hydrogenated oils. It’s also used in French fries, breads, and croissants,” he continued.

This is perhaps the strongest allure of industrially-produced trans fats. They make food irresistible, maybe even slightly addictive. On top of that, they also improve shelf life. Unlike the nonhydrogenated unsaturated fatty acids, trans fats take a really long time before turning rancid. Food that is made using it likewise doesn’t spoil easily.

But inside the body, artificial trans fats compromise cardiovascular health. This is quite unlike their other unsaturated cousins, which are known to be good for the heart. Though the exact pathways by which they operate are still incompletely known, it is hypothesized that after being absorbed in the stomach, some trans fats enter the bloodstream and swim all the way to the liver. Here, they seep into the organ and infiltrate the cells, where they throw the production line into disarray.

One proposed mechanism is that trans fats awaken a particular enzyme, which converts high-density lipoproteins (HDL, the good kind) to its low- or very-low-density counterparts (LDL and VLDL, the bad kinds). This may explain why trans fats uniquely deliver a double-whammy of raising LDL while reducing HDL levels in the blood.

Unlike HDL, which clears cholesterol from the body, LDL dumps the lipid in the veins and arteries. So, as the amount of LDL in circulation ramps up, so does the likelihood of forming cholesterol plaques. These, in turn, impede blood flow and give rise to a condition called atherosclerosis.

If left unchecked, atherosclerosis will progress to more severe cardiovascular problems, such as heart attack and stroke. Taken together, these diseases claimed almost 13 million lives across the globe in 2010 alone.

In the same year, according to a 2016 study by the American Heart Association, trans fats were directly involved in 537,200 of these deaths. 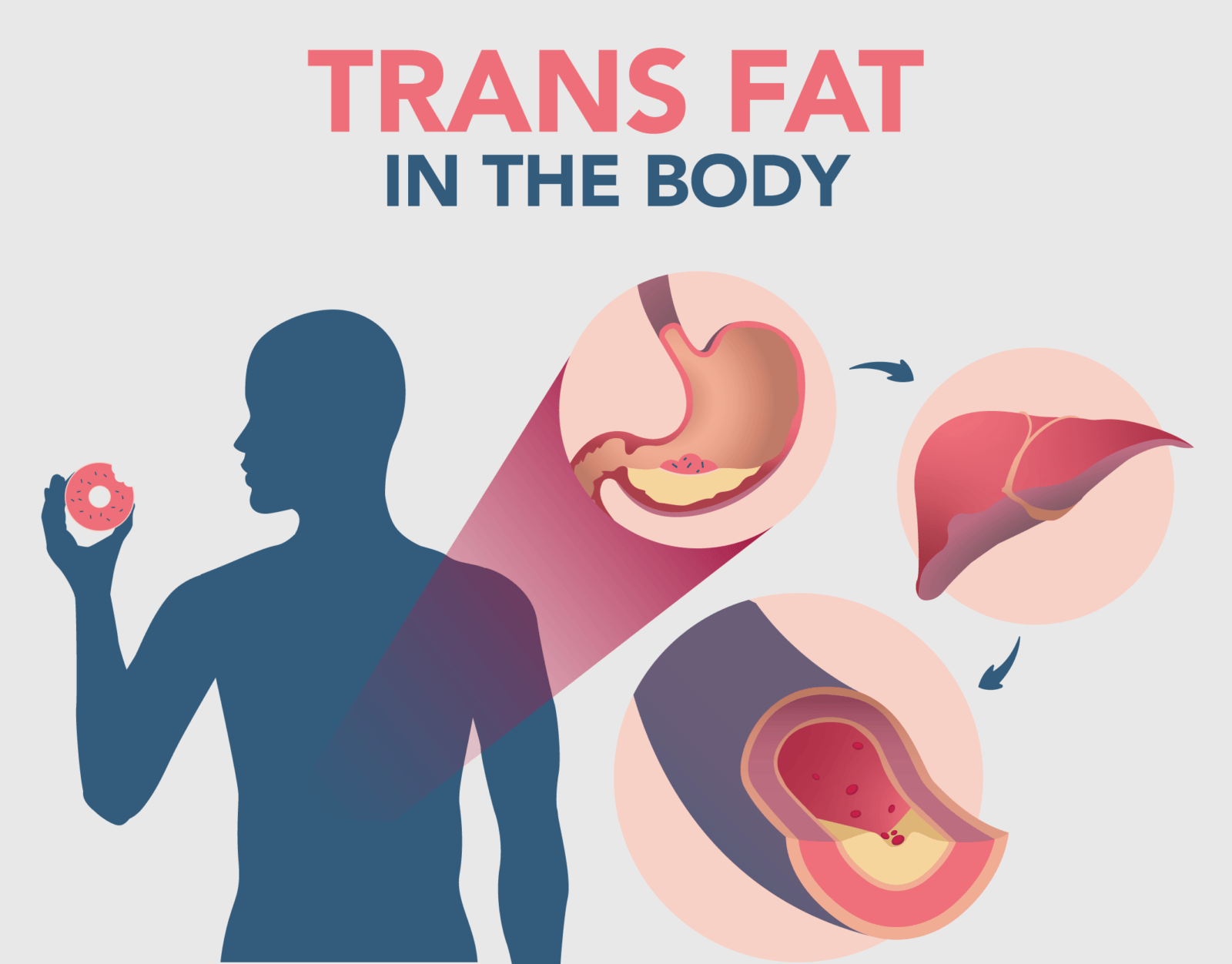 The Philippines has a lot of catching up to do. Faced with a growing number of lifestyle-related diseases, some of the more developed countries have moved to restrict the circulation of trans fats in their food systems.

In 2002, Denmark became the first country in the world to set a ceiling on the amount of industrially-manufactured trans fats a food item could contain. The United States, in 2015, removed partially hydrogenated oils from the list of ingredients that generally recognized as safe. By 2020, they expect that all pre-packaged food items in circulation will cease to have trans fats.

Here, the burden is the same, but the reaction is much more muted.

Before any type of food item can be legally commercialized, manufacturers have to prove to the Philippine Food and Drug Administration (FDA) that they can operate in adherence to industry food safety standards and practices. This ranges anywhere from providing proper storage for raw materials to designing adequate packaging and showing that their product, analytically, complies with national standards.

Nowhere in the process, unfortunately, is there an explicit limit on trans fats.

According to Remedios Baclig, Consultant to Oleofats, Inc. and member of the Philippine Association of Food Technologists, companies are, for the most part, free to stretch their interpretation of what zero grams of trans fats per serving means. The standards are vague enough to allow them this wiggle room. Even the international arbiter of food safety, the Codex Alimentarius, is not clear on this. There is a proposed ceiling before a product can claim to be trans-fat-free, but nothing is final yet.

The ingredients list should, in principle, help to clear some of this fog. Food that contain partially hydrogenated oils, regardless of how many grams are declared per serving, are bound to contain trans fats.

This falls apart in practice, however, with many food items simply listing vegetable oil — a broad umbrella that has saturated, unsaturated, and trans fatty acids all under its shade. The end result is an industry where trans fats are, for all intents and purposes, unrestricted.

There seem to be efforts to change this, though, with a triumvirate of bills on trans fats coming out of the Senate. The youngest of the three, filed by Senator Maria Lourdes Nancy S. Binay on 21 May 2018, appears to be the most comprehensive. It calls for a sweeping removal of trans fats from food facilities within two years of its enactment.

But even this is lackluster. “When I read the official document, … I said to myself ‘this one has no teeth,’” Baclig fears. “I found it lacking in further research on the actual food applications of artificial trans fats.” The others – the first, filed by Ramon Bong Revilla, Jr on 2009 and the second, by Manuel M. Lapid on 2010 – are shorter in length and sparser in content.

When the shift hits the fat

Back at their office, Rodriguez says it’s not all bad.

Following the 2015 US FDA directive setting a 3-year deadline for companies to phase trans fats out of their products, many food manufacturers operating in the Philippines have, of their own initiative, started doing the same. More and more, Oleofats has been receiving requests for oils that are low in trans fat content. The big ones, Rodriguez adds, are particularly strict about it, because they have a name to protect. Sometimes, their internal standards are even more stringent than the national ones.

Oleofats, on their end, welcomes this paradigm shift in nutrition. “Even before we were required to, we already started development on oils without trans fats,” says Rodriguez. “Of course, we also need to have some social responsibility.”

Indeed, there is still much to be done. At the very least, we can take comfort in a simple fact: When it comes to fighting trans fat, we’re no longer going around in circles.–MF

Editor’s note: This story was produced under the ‘(Un)Covering Trans Fats Media Training and Fellowship Program’ by Probe Media Foundation Inc. (PMFI) and ImagineLaw (IL). The views and opinions expressed in this piece are not necessarily those of PMFI and IL.