Why rice is life for Pinoys 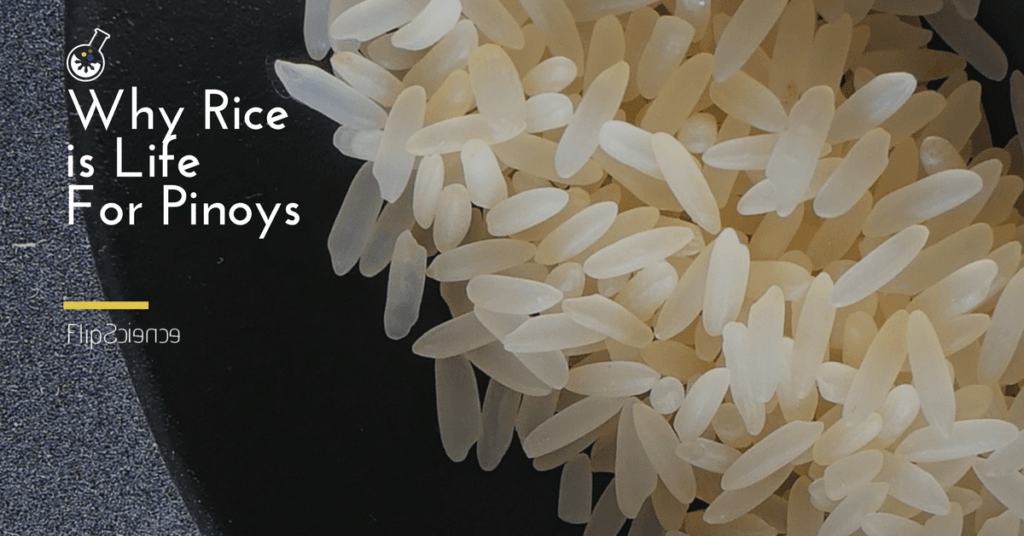 For millions of Filipinos, rice is life. No self-respecting Pinoy would eat adobo or sinigang without it. Chefs could concoct fancy recipes pairing kare-kare with bread, for example, but it will never really sell, or at least not as much as tapsilog.  It’s a staple for breakfast, lunch and dinner. Come merienda time, there’s arroz caldo, ginataang bilu-bilo, and bibingka — still an all-rice affair. In short, no Pinoy meal would be complete without it.

Why do Pinoys love rice so much?

The average retail price of this Pinoy favorite is at P37.99/kg for regular milled varieties, and P42.19/kg for well-milled ones.

An alternative grain, white corngrain, is said to be the healthier choice because it’s high-fiber and low-sugar. Although cheaper at P29.32/kg, white corngrain does not seem to be enjoying the same level of popularity.

Eating rice is not exactly cheap and healthy, so why the fixation? It has three things going for it.

It’s filling and can be counted on to stave off hunger.

Data from the 2016 Food Consumption and Nutrition Report of the PSA indicate that rice contributed the highest content of calories and protein to the average Filipino’s daily food intake in 2015. It was the top source of calories, contributing 1,097.99 grams per person per day. For comparison of the per capita supply of calories, only 176.89 grams came from pork, 91.96 grams from chicken, 17.26 grams from beef, and 8.51 from fish.

Rice similarly lorded it over food items supplying protein, with the daily protein supply of rice per person at 23.07 grams. Protein was also sourced from pork, chicken, beef and fish at 16.84 grams, 11.28 grams, 2.50 grams, and 1.37 grams, respectively.

For fats, pork was a major source which contributed 11.44 grams per capita daily in 2015 but rice still supplied a considerable amount at 5.54 grams per person daily.

The so-called “staple food of Pinoys” dominates our daily food intake. Unsurprisingly, Pinoys relies on it for sustenance. Additionally, while not cheap per se, it is relatively cheaper compared to pork, chicken or beef.

It’s a way of life for us Filipinos, and it may be because we’re poor.

In the 2015 Family Income and Expenditure Survey of the PSA, about 41.9 percent of the total annual family expenditures went to food. Breads and cereals (including rice) accounted for 11.7 percent of food expenditures.

An in-depth study conducted by the Southeast Asian Regional Center for Graduate Study and Research in Agriculture (SEARCA) and commissioned by the Philippine Rice Research Institute (PRRI) reported that the Philippines’ neighboring countries, such as China, India, Indonesia, Bangladesh, Vietnam, and South Korea, all posted a decrease in rice demand since the 1970s.

According to the study, booming economies and higher incomes paved the way for other countries to adopt a more diverse diet. People ate less rice and corn, and more meat, fish, produce, and even baked goods. Meanwhile, lower-income Filipinos, especially those in rural areas, were still dependent on these grains, because other food items were not affordable enough.

This one defies scientific studies and reports. Rice just tastes so good. It doesn’t hurt that it is also easy to cook, and that it pairs well with practically anything. Thus, letting go of it is the single most frustrating task for most would-be dieters.

A self-confessed rice lover waxed poetic when interviewed for this article. Adrienne Mendoza, a young wife and mother and a fierce advocate of organic food and healthy living, is powerless against it.

For a lot of Pinoys, that’s compelling enough to order that extra serving. –MF

Rice prices based on the Philippine Statistics Authority’s Updates on Palay, Rice and Corn Prices as of 25 August 2017.