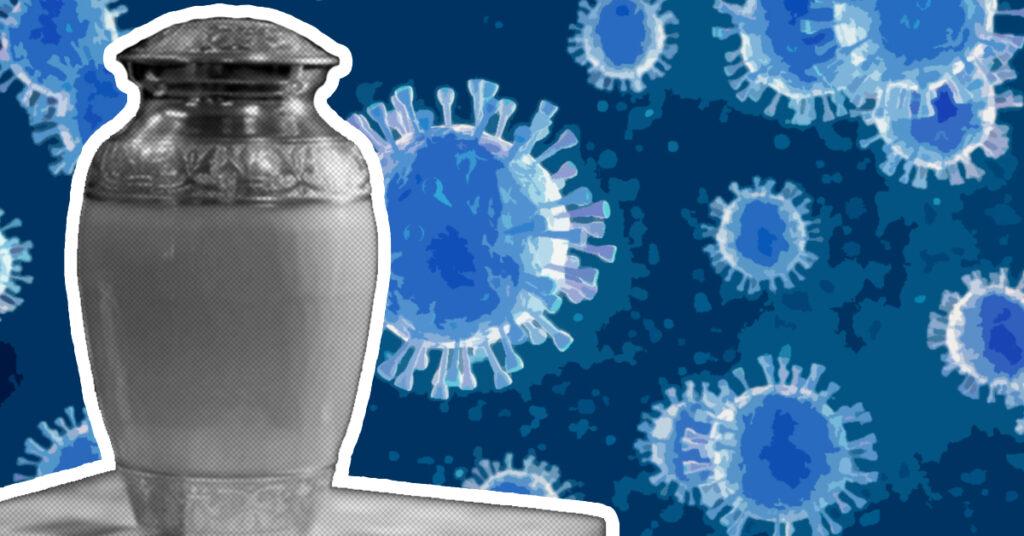 •At the start of the COVID-19 lockdowns in the Philippines, the government encouraged rapid cremations of confirmed or suspected COVID-19 deaths.
•While this did help address initial difficulties in procuring protective equipment for morticians and frontliners, there is no scientific basis for expeditious cremations as a means of curbing COVID-19 transmission.
•The rushed cremations resulted in seemingly unforeseen medical, legal, cultural, and emotional consequences—aspects that, along with good science, should factor into decision-making for health crises.

No matter what the cause, a person’s death can bring immeasurable, even unbearable pain to the loved ones they leave behind. As the healing process varies from individual to individual, some may take longer than others to grieve; in such cases, mourning rituals help them get by.

This is especially true in the Philippines, a country in which a vast majority of the population identifies with a particular religion. In this predominantly Catholic nation, culturally ingrained death and dying practices (such as wakes and proper burials) serve as avenues for bereaved families and friends to bid their final farewells and come to terms with their loss.

Sadly, the rapid cremations of confirmed or suspected COVID-19 cases in the Philippines barred many families from properly mourning their dead, at a time when the populace was struggling to adapt and adjust to the distressing reality of a global pandemic.

While the government may have deemed such regulations necessary to prevent the coronavirus from spreading, there is no scientific evidence supporting their merit, at least strictly within the context of mitigating COVID-19 transmission. Worse, rushed cremations have raised more questions than answers, and not just in terms of public health.

On March 22, 2020, four days after the start of what continues to be one of the world’s longest lockdowns, the Department of Health (DOH) issued Memorandum 2020-0158. This contained the DOH’s proposed guidelines for properly handling the remains of suspect, probable, and confirmed COVID-19 cases, including cremation within 12 hours after death. The guidelines also specified that procedures “should be in accordance with the person’s religion and culturally acceptable norms” as much as possible (for instance, cremation is “haram” or forbidden by the Islamic faith).

While it did not explicitly ban burials, the government encouraged rapid cremations. “The understanding was that all were to be cremated originally to protect funeral service workers,” explained Dr. Edrie T. Alcanzare, a public health specialist, in an interview with FlipScience. Due to early difficulties in procuring protective personal equipment (PPE) for both frontliners and those who handled the bodies of the deceased, rapid cremation became a helpful precautionary measure.

Unfortunately, this came with more challenges. During the early part of the lockdown, funeral parlors refused to take cadavers, with many of them making a negative swab test a prerequisite. “This led to an overflow of dead bodies that the funeral parlors didn’t want to accept,” revealed Alcanzare. When local media caught wind of it, the issue became sensationalized, inadvertently casting doubt on how the country was handling the pandemic.

In a recently published article in Forensic Science International: Synergy, Dr. Matthew C. Go and Dr. Dada Docot closely examined the rushed cremations of COVID-19 deaths in the Philippines. “Strict protocols that enforce immediate and mandatory cremation in a country where burning the dead remains largely taboo aggravate people and disrupt the grieving process of the bereaved,” wrote the authors.

In an email interview, the researchers elaborated on their findings. “Many other countries are dealing with a large number of deaths due to the pandemic, and yet have not employed an impulsive rapid cremation stratagem,” Go commented, noting the absence of any cases of COVID-19 transmission from the deceased to the living in places that did not mandate cremation. “I would argue the greater risk of catching COVID-19 lies between the attendees to any funerary rites.”

Interestingly, the CDC also laid out guidelines for proper burial procedures in the sheet, indicating that families could proceed with burials even without the assistance of a team. Furthermore, as long as they had the necessary protective gear, family members could prepare the body, bring it to its final resting place, and even view it from afar (following social distancing regulations).

In the past, misconceptions and incorrect beliefs about transmissibility played a major role in how cases of infectious disease fatalities were initially handled. Among these is the now-obsolete miasma (or “bad air”) theory, a longstanding myth that enjoyed popularity from the Middle Ages to the mid-1800s. This theory attributed infectious diseases and epidemics to foul-smelling, poisonous vapor made up of airborne particles from corpses and decomposing matter.

This was also part of the reason why doctors of that age did not immediately adopt handwashing as a transmission-curbing sanitation measure; it was hard for them to accept that the hands they used to save patients’ lives could actually endanger them. In the latter half of the 19th century, the gradual acceptance of germ theory began cleansing the medical community of miasma’s unscientific stench.

“It is important to critically interrogate protocols that present themselves as scientific,” stated Docot. “In our paper, we wrote that there seems to be no scientific justification for cremation.”

According to the authors, dead bodies are generally not infectious, with some exceptions (such as hemorrhagic fevers, cholera, and the improper, unprotected handling of lungs and bodily fluids). They also emphasized that the potential risk of COVID-19 transmission from the dead to the living is considered low, particularly when handlers are wearing standard PPE and keeping physical contact to a minimum.

“There is no scientific evidence supporting cremation as a method for disease prevention with regards to COVID-19,” Alcanzare, who was not connected to the study, affirmed. He added that transmission via surfaces is not a major way of spreading the disease. (Though one could, of course, get infected if they were to touch their mouth or eyes with hands that came into contact with infected droplets.)

“From what I’ve seen, depending on the level of science literacy, countries in Europe and the United States still give burial options,” Alcanzare observed. “I only see cremation [as a COVID-19 mitigation procedure] in developing nations.”

But if science doesn’t support rapid cremation for this purpose, then where did the belief come from—and why were Philippine authorities particularly adamant about it? Go and Docot may have an answer: the country’s colonial history, which was what prompted their paper in the first place.

The collaboration between Go, a forensic anthropologist, and Docot, a cultural anthropologist, began after a peer-reviewed journal published a series of articles defending Western colonialism from modern scrutiny.

On Twitter, Docot posted archival material to show “only some of the horrendous effects of colonialism” in Nabua, Camarines Sur. “One snippet from my hometown’s archives documents the cholera epidemic of 1902, which led to the mass cremations of residents.”

Go saw and responded to Docot’s tweets, seeing a possible connection between these events and the “knee-jerk reaction” of rapidly cremating COVID-19 deaths. After exchanging ideas, the pair decided to combine their respective fields of expertise to write about the topic. “We wanted to think about how colonial sanitation regimes reverberate in rapid cremation practices in the Philippines during the COVID-19 pandemic,” said Docot.

“The cholera epidemic in the Philippines during the early years of American colonization unfolded as a literal war as newly colonized Filipinos struggled against both armed conflict and disease,” the authors wrote in their paper. During this time, mass cremation of cholera deaths became part of the U.S. colonial government’s sanitary regimes, part of its campaign to pacify and subjugate Filipinos.

The cremations, along with the burning of homes in infected areas, the creation of detention centers for the sick, and other hastily imposed protocols, sparked rage and fear among locals. As a result, many of them hid their sick relatives elsewhere or disposed of their departed by burying them within the grounds of their homes or throwing them into the river, rendering the Americans’ sanitation measures ineffective.

Burned down to ashes

In their article, the authors also highlighted the various disadvantages and consequences of hastened cremation. “It seemed appropriate, if not crucial, to combine our historical, cultural, and scientific perspectives on such a timely and palpable issue,” Go shared.

For starters, bereaved friends and families could not grieve the loss of their loved ones properly. Reportedly, they were prohibited from seeing the remains of their loved ones prior to cremation, denying them the opportunity for a last goodbye. They also couldn’t hold wakes, special masses, and other traditional gatherings that could have been opportunities to mourn. Some even wondered whether the urns that they received really contained the ashes of their loved ones, as the speedy cremations could have resulted in some truly horrifying mistakes.

Pandemic cremation protocols can also severely impact matters related to law enforcement and public safety. As an example, the authors cited the controversial deaths of nine high-profile inmates in the New Bilibid Prison complex’s maximum security compound, back in July 2020. One of the inmates was Jaybee Sebastian, a key witness in the drug-related charges against Sen. Leila de Lima.

After their deaths were publicized, the Bureau of Corrections (BuCor) confirmed that the inmates were cremated within 12 hours postmortem, following COVID-19 protocols. Reportedly, no autopsies were performed, and their next-of-kin were not informed beforehand. The BuCor also did not release any health records, COVID-19 test results, or any other details surrounding their deaths.

Many wondered if they truly died of COVID-19, or if there was actually foul play involved. Others raised the possibility that the inmates merely faked their deaths, and had already started living freely under new identities. Without accurate and accessible medico-legal data, the public may never know for sure.

Go stressed that the accurate reporting of deaths and the circumstances surrounding them are essential to public health, safety, and civil registration and vital statistics systems. “These systems can easily unravel when procedures are rushed or science is ignored.”

Of choice, conversations, and considerations

Ten months into the lockdown, the general approach to handling COVID-19 deaths has changed, though the DOH memorandum remains in effect.

According to Alcanzare, thanks to a better understanding of the disease and an improved capacity to obtain protective gear for morticians, most funeral parlors have resumed operations. Families are also able to hold proper burials in cemeteries again. “Because it’s been reiterated that dead bodies rarely transmit disease and, good news, we’ve gotten better at procuring PPEs for everyone, we’re no longer [strictly following] the proposed mass cremations nor [using] the LGU crematoria.”

There is a lot more to addressing a health crisis than just swift action, though. For instance, the issue of how COVID-19 deaths are stigmatized tends to get lost in the endless discussions about the pandemic.

“The reason why Quezon City had to open a crematorium was because funeral parlors valued safety of their personnel over business, which is a good thing,” Alcanzare stated. ”But it has to be an informed decision.”

“Cremation should remain a cultural and religious choice, in consideration of available resources and the rights and wishes of family members,” Go concluded.

When deciding on matters of public health, science must be given equal weight with urgency, if not more. And as much as possible, the effects and impacts of those decisions—whether medical, legal, cultural, or emotional—must be taken into consideration.

Or, as Docot put it: “We wanted to show that interdisciplinary conversations between forensics, history, Philippine Studies, and anthropology can be a source for crafting culturally appropriate ways of honoring the dead, even during pandemics.”