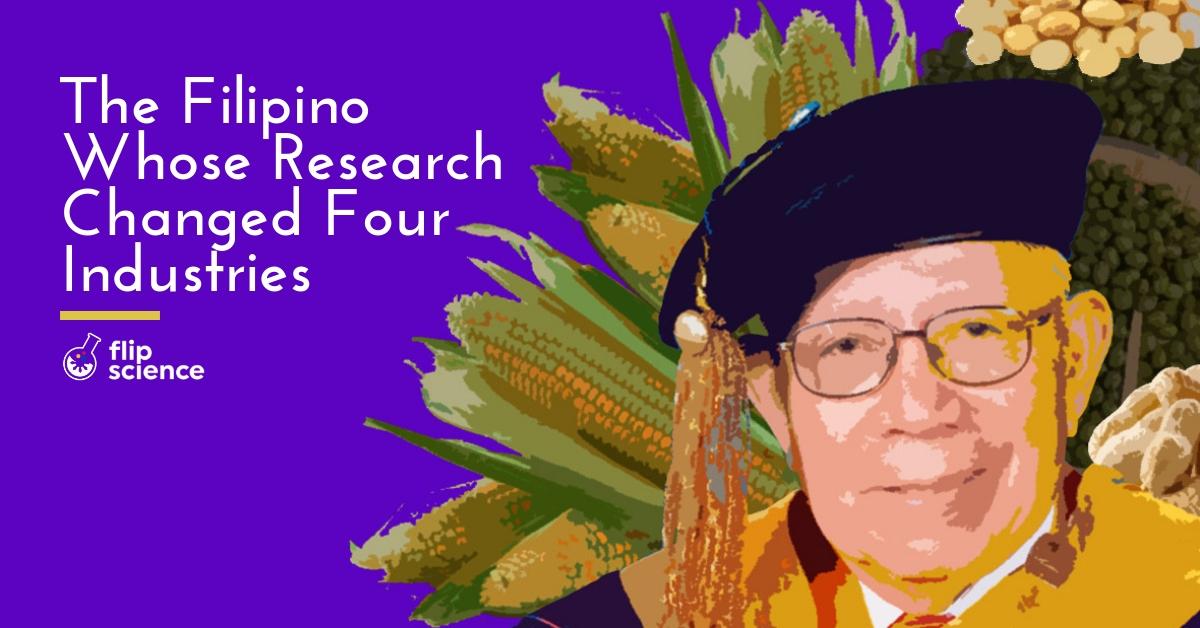 • Born on January 8, 1933, Dr. Ricardo M. Lantican is an internationally recognized pioneer in plant breeding.
• Dr. Lantican received the title of National Scientist in 2005 for developing over 20 enhanced mungbean, soybean, and peanut varieties.
• He and his co-authors were also the first to shed light on the Southern maize leaf blight disease –and had the United States paid more attention to them in the 1960s, the country could have saved billions of dollars a decade later.

It wouldn’t be an overstatement to say that to this day, Philippine society remains deeply rooted in agriculture. Going by the World Bank‘s 2017 numbers, about 27.7% of the Filipino workforce is engaged in agricultural industries, with agriculture accounting for 9.7% of the country’s GDP. Furthermore, the Philippines is among the world’s top producers of rice, sugar, coconuts, and corn. Thus, it’s not surprising that a significant amount of research goes into developing ways to enhance crop production in the Philippines.

In the case of National Scientist Dr. Ricardo M. Lantican, his vast body of work not only led to the development of numerous legume varieties across Asia, but also revealed the key to solving a mysterious crop crisis in the United States.

Dr. Lantican was born on January 8, 1933 in Los Baños, Laguna. The son of a school officer and an elementary teacher, Lantican and his nine siblings learned the value of both agriculture and education early on.

After graduating with a degree in Agriculture from the University of the Philippines Los Banos (UPLB) in 1954, Dr. Lantican went on to obtain a master’s degree in Crop Science from North Carolina State College two years later. He finished his academic journey with a doctorate degree at Iowa State University in 1961, after which he started his professional journey in science and research.

Over the course of his decades-long career, Dr. Lantican devoted much of his time and effort towards researching and breeding enhanced varieties of leguminous crops such as mungbean (or what we commonly refer to as munggo), soybean, and peanut. Recognizing the role of legumes as a major source of protein in the Filipino diet, Dr. Lantican worked alongside his colleagues to improve these crops’ yield, longevity, and resistance to diseases. 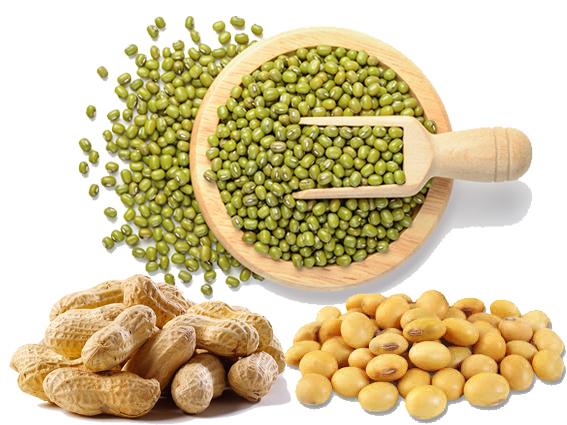 Dr. Lantican and his team developed the aptly named Pag-asa (“hope”) mungbean varieties, which mature earlier and more uniformly than typical mungbeans. Pag-asa varieties also produce a higher, more consistent yield. These traits have made Pag-asa a popular choice for mungbean cultivators in many Asian countries, as well as in Australia.

Meanwhile, Dr. Lantican’s collaborative efforts with other UPLB researchers resulted in the development of a flavorful, high-yielding variety named Tiwala (“trust”). Tiwala soybeans are also resistant against rust disease, a condition caused by harmful fungi that results in plant deformities and brownish spots on the infected plant’s surface.

His work on breeding peanuts also became a “blessing” to farmers, literally and figuratively. On top of producing a higher yield than typical peanut varieites, the Biyaya variants are resistant to rust and leaf diseases.

As impressive as they are, however, these enhanced legume varieties weren’t his only major contributions to agriculture.

Unfortunately, corn hybridization doesn’t automatically produce seeds of the same quality, which means cross-pollination needs to be done repeatedly. This involves cutting off the male flowers (located at the top of the plant) to prevent pollen from falling into the cobs (where the female flowers are). This also made the hybridization process laborious, complicated, and time-consuming.

Thus, when researchers discovered a trait carried by the maternal plant that caused male flower sterility–a trait called T-cytoplasm–virtually all the corn farmers in the US readily embraced it. Cutting off the male flowers was no longer necessary, since they weren’t capable of producing pollen. As a result, more farmers could produce hybrid corn with relative ease and at a reduced cost.

At the time, though, researchers weren’t aware of a critical fact: If plants carrying a specific cytoplasm had a vulnerability to a certain type of fungus, it meant that all plants carrying the same trait were equally as susceptible.

In 1961, Dr. Lantican co-authored a study that looked into how a disease called Southern corn leaf blight affected a number of crops in UPLB’s corn fields. Upon closer examination, Dr. Lantican’s team discovered that the affected plants had something in common: the T-cytoplasm trait. However, when Dr. Lantican and his co-authors revealed their findings, few recognized the value of their research. 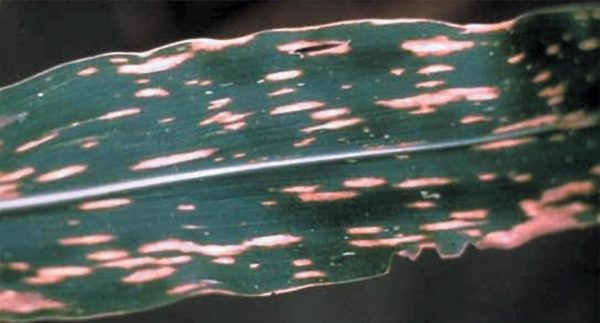 This changed a decade later, when the fungus Helminthospcrium maydis infected US corn with Southern leaf blight, decimating the country’s corn yield in 1970. It was at that moment when the US–and the world–realized that Dr. Lantican and his colleagues were already on to the problem way before it became a mini-disaster. Had sufficient attention been paid to the team’s findings earlier, the US corn industry would have been spared from billions of dollars’ worth of losses.

Dr. Lantican’s pioneering agricultural work emphasizes the importance of genetic diversity in the world’s major crops. Thus, in recognition of his contributions to agriculture, the title of National Scientist was bestowed upon him in 2005.

Over the years, Dr. Lantican has played an active role in science policy making, working with the Philippine government and local and international agencies. In addition, he has written about various topics on science and technology. His essays and articles have appeared in newspapers, and have also been compiled and published as books. He has also received numerous awards and fellowships throughout his career, both in the Philippines and abroad. 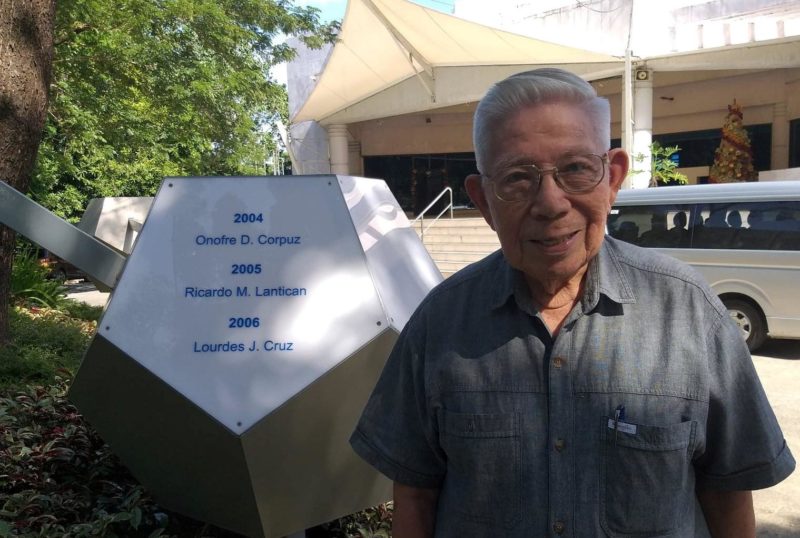 Dr. Lantican poses beside his commemorative marker at the National Academy of Science and Technology. (Image: Mikael Angelo Francisco/FlipScience)

To this day, Dr. Lantican continues to work with the National Academy of Science and Technology (NAST) in advancing science and technology in the Philippines.

Editor’s note: An earlier version of this article erroneously marked 1954 as the beginning of Dr. Lantican’s professional career. The dates have been corrected.