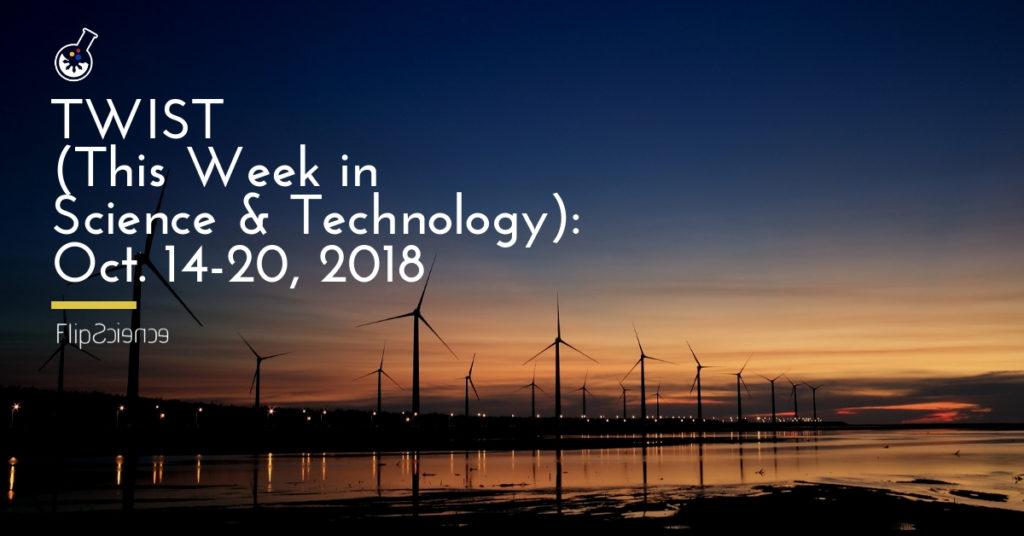 ICYMI: A handful of science and technology updates from October 14 to October 20, 2018.

The minds and hands behind the newly rehabilitated Pasig river were feted at the first-ever Asia Riverprize awards in Sydney, Australia last October 17. Given by the International River Foundation (IRF), the award recognizes organizations that rehabilitate rivers and implement river basin management. After its decades-long reputation of being extremely polluted, the Pasig river has considerably changed for the better, as the rehabilitation project “resulted in significant water quality improvement, as well as the revitalization and development of the Pasig River system.” Read the full story.

Dr. Gay Jane Perez, a Filipina scientist from the University of the Philippines Diliman’s Institute of Environmental Science and Meteorology, won this year’s ASEAN-US Science Prize for Women. She bested seven other women contenders across Southeast Asia, and received recognition for her research (the use of satellite data for forecasting drought and improving crop yield by identifying ideal planting areas and seasons).

Congratulations to Dr. Gay Jane Perez, who won the 2018 Asean-US Science Prize for Women – the first Filipina to win…

Along with the award, Dr. Perez also won a $20,000 cash prize from the United States government and Underwriters Laboratories. Read the full story.

After six months of being closed for cleaning and restorative operations, Boracay has officially begun its 10-day dry run prior to its official opening. A limited number of guests from Aklan and Western Visayas got the chance to get a sneak peek at the “new” Boracay.

Unfortunately, within hours of its first day, it appeared to have already been littered with disposable cups and other types of garbage.

Just hours after Boracay reopened to the “LOCALS” as the Dry Run event took place today, The CULPRITS also celebrated by…

Human memory capable of storing up to 10,000 faces

According to researchers, the average human can remember between 5,000 to 10,000 faces. They studied a small group of people ranging from 18 to 61 years old, and found that facial recognition ability varies from person to person. Their research also revealed that some people could only remember as few as 1,000 faces. Read the full story.

The Kepler space telescope is close to the end of its space-faring journey, as its managers observed its pointing becoming unstable (indicating low fuel supplies). The 692-million-dollar telescope, operated by the National Aeronautics and Space Administration (NASA), launched in 2009, and has captured around 2,650 confirmed exoplanets (and 3,000 more pending confirmation) to date. With its 1.4-meter mirror and 95-megapixel camera, Kepler revolutionized the way scientists find and study exoplanets. Read the full story.

Climate change is strongly believed to have caused the massive decline of insects and arthropods in Puerto Rico’s Luquillo forest. According to a recently published study, their populations have declined by up to 99% over the course of four decades. This has also led to a population drop in the species that eat said insects, such as anole lizards and birds like the Pureto Rican tody. Read the full story.

The Pando quaking aspen colony (a.k.a. the “Trembling Giant”), one of the largest (and confirmed to be the heaviest) organisms in the world, appears to be dying at a steady rate. The 80,000-year-old underground root system, which occupies 43 hectares (106 acres) of land, is being rapidly consumed by the growing mule deer population living in and around it. The deer population boomed because humans killed off most of their natural predators in the area (such as wolves and grizzly bears) in the early 1900s. Read the full story.