This weird oval was likely our ancestor, and we know this thanks to cholesterol 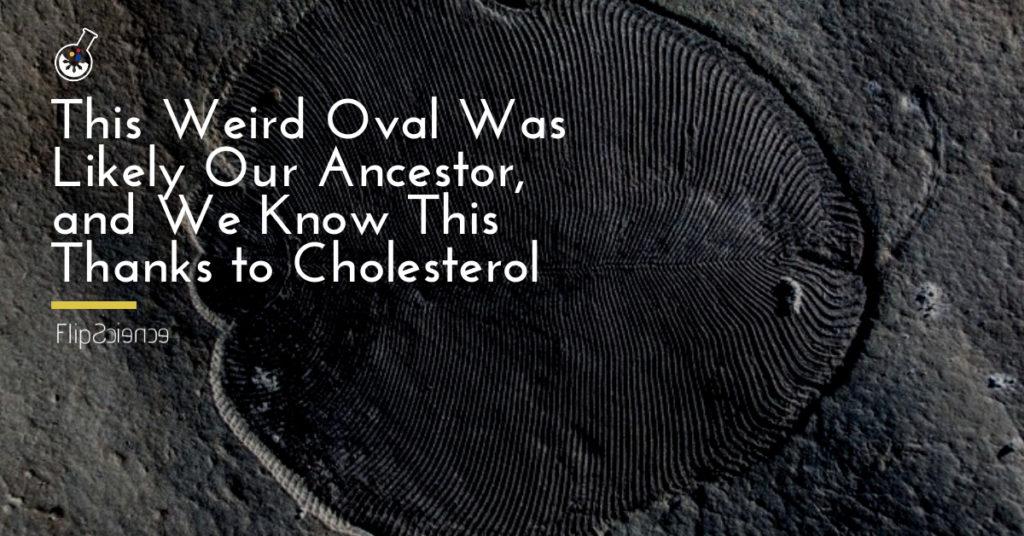 When Australian geologist Reg Sprigg first stumbled upon a strange imprint in the mountains of Flinders Range in 1947, he wasn’t quite sure what he’d found. He eventually settled on “early Cambrian (?) jellyfish” and named it Dickinsonia.

Little did he know that it would birth a 70-year-old mystery surrounding a 558-million-year-old fossil.

Now, thanks to newly published findings in the journal Science, this prehistoric puzzle may have been solved at last. On top of that, we may have come significantly closer to understanding how life on Earth came to be.

Discerning the derivation of the delightfully distinct Dickinsonia

Over the decades, scientists presented numerous theories about what Dickinsonia actually was. At different points in time, Dickinsonia was called a mushroom, a worm, a bacterial colony, and even a “failed evolutionary experiment.”

Dickinsonia is perhaps the most well-known member of the Ediacaran biota, believed to be the first complex organisms. Soft-bodied and virtually devoid of the body parts typically associated with animals, these strange creatures lived on the ocean floor sometime between 541 and 571 million years ago. This places Dickinsonia‘s emergence approximately 20 million years before the “Cambrian explosion,” when arthropods, bivalves, and other modern animals showed up.

Most Dickinsonia fossils discovered across the world were merely two-dimensional sandstone imprints. This made it even more difficult to figure out its genealogy.

Enter Ilya Bobrovskiy, a PhD student from the Australian National University. Miraculously, Bobrovskiy discovered some well-preserved Dickinsonia fossils on the side of a northwestern Russian cliff. These fossils were so well-preserved, in fact, that they contained organic matter that was still intact.

“These fossils were located in the middle of cliffs of the White Sea that are 60-100m high,” shared Bobrovskiy, the paper’s lead author. “I had to hang over the edge of a cliff on ropes and dig out huge blocks of sandstone, throw them down, wash the sandstone and repeat this process until I found the fossils I was after.”

Finding the fossils, however, was only part of the process. Bobrovskiy and his fellow researchers had to figure out how to study them.

Fortunately, Bobrovskiy saw “distinctive dark films” while examining Ediacaran fossils under a microscope. He realized that these were traces of organic compounds that remained long after the organisms decayed.

From there, he had an idea — one that he wasn’t sure would work.

Science on steroids, so to speak

Among the numerous things that distinguish animals from all other complex creatures is the presence of cholesterol in their cell membranes. Cholesterol is a type of steroid, which refers to organic compounds found in complex living things.

Bobrovskiy and his team took a closer look at the samples and found cholesteroids, molecular fossils of cholesterol. According to study co-author Jochen Brocks of the Australian National University, it was this discovery that was “the giveaway that Dickinsonia was in fact an animal.”

The team ruled out the possibility of contamination by checking the soil around the fossil. They found another type of steroid called stigmasteroids, which are typically associated with green algae. This proved that the cholesteroids they found in the Dickinsonia fossil actually came from the organism.

In other words, Dickinsonia was an animal. It’s the oldest one we’ve ever discovered, in fact, effectively making it our ancestor.

These findings represent a major milestone in figuring out how life evolved on Earth.

“[Understanding] what these strange-looking Ediacaran creatures really were,” said Brock, “is essential if we want to understand the emergence and evolution of our own earliest ancestors.”

For now, the transition from Dickinsonia to the far more complex Cambrian animals remains a mystery. At the very least, however, we now know where the mystery began.