Eating and sleeping all day: the life of a giant panda 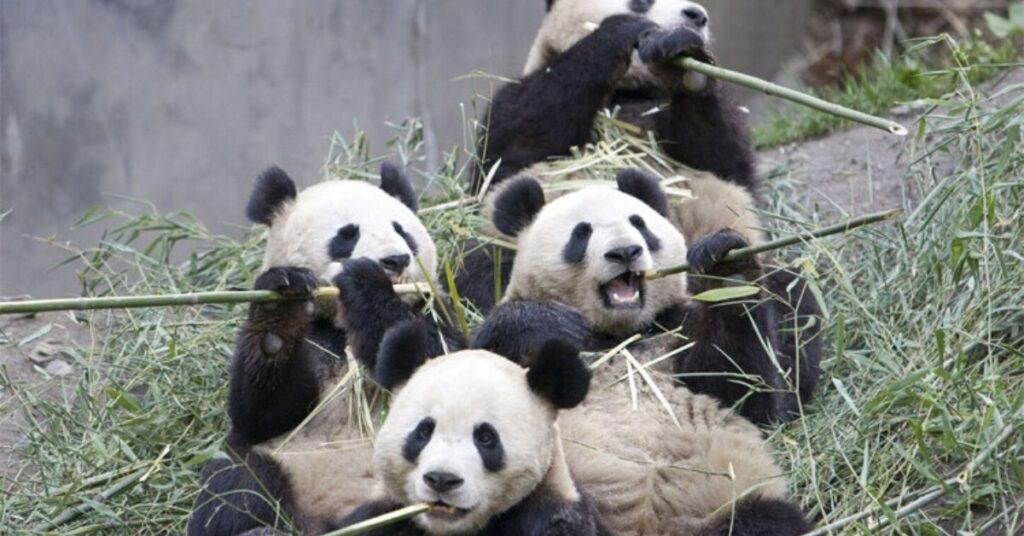 At first glance, the giant panda (𝘈𝘪𝘭𝘶𝘳𝘰𝘱𝘰𝘥𝘢 𝘮𝘦𝘭𝘢𝘯𝘰𝘭𝘦𝘶𝘤𝘢) might seem like it’s living the dream. This iconic Chinese bear spends about 10 to 16 hours looking for food and eating, and the rest of its day resting and not really moving around a lot. There’s a lot more to this situation than it looks, though… and it has nothing to do with them being lazy.

Pandas eat so much bamboo—anywhere between 20 and 40 pounds a day—to sustain their nutritional requirements. That’s because they’re basically built like carnivores, at least as far as their stomachs and intestinal systems are concerned. They don’t have the proper gut bacteria for breaking down cellulose, the carbohydrate that strengthens plants’ leaves, stems, and branches. In fact, researchers estimate that pandas only digest about 17 percent of what they eat, meaning the rest of it goes straight from bamboo to “Bam, poo.”

Now, you might be wondering: If a panda’s guts can’t handle shoots that well, then why won’t it just go chomp on a steak instead?

Well, things weren’t always this way for these black-and-white bamboo-eaters. Approximately 7 million years ago, ancient relatives of the giant panda were omnivorous; the shift in pandas’ eating habits only started somewhere between 2.4 million and 2 million years ago. Pandas’ jaws and teeth became more well-suited for crushing bamboo. Additionally, their wrist bones evolved for grasping bamboo stalks more efficiently. More importantly, the gene for the panda’s umami taste receptor (which is what makes protein from meat so appetizing) just stopped working. Right now, though, it’s a chicken and egg situation: We’re still not completely sure whether pandas stopped lost the taste for meat because they stopped eating it, or if it’s the other way around. Interestingly, pandas have also learned to go for specific bamboo varieties that contain more of the nutrients they need.

Far from being “evolutionary cul-de-sacs,” pandas have actually adapted quite well to their less-than-ideal circumstances. They’re not dead ends on the bear family tree, as some argue. On the contrary, they’ve managed to survive and succeed for millions of years, despite the cards being stacked against them.

Today’s Science History Milestone: On December 15, 1815, French physicist and chemist Henri Becquerel was born. Becquerel was the first person to discover evidence of radioactivity. For his groundbreaking work in this field, he won the 1903 Nobel Prize in Physics alongside Marie Skłodowska-Curie (Marie Curie) and Pierre Curie. The SI unit for radioactivity, the becquerel (Bq), was named after him.