Why you should never carelessly approach an ostrich 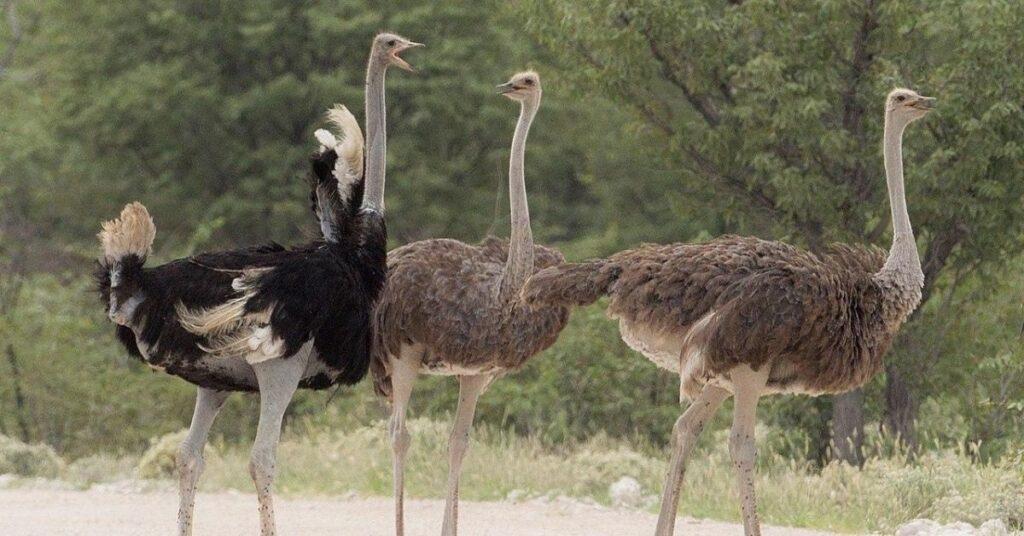 Popular myth would have you believe that ostriches (genus Struthio) bury their heads in the sand to camouflage themselves from predators. This isn’t true, of course; if they did that, they wouldn’t be able to breathe. Experts say that this misconception stemmed from either their feeding behavior, the way they look when they’re digging nests with their beaks, or their alleged tendency to hide from inescapable danger by stretching their necks along the ground. If you think about it, though, there should be very few reasons for them to hide, due to their many evolutionary advantages: their size, speed, eyesight, and ability to deliver swift, deadly kicks.

Growing from 6-9 ft (1.8-2.7 m) tall and weighing up to 350 lbs (159 kg), the ostrich is the largest living bird. Winged yet incapable of flight, it has an elongated neck, a broad, flat bill, and dull or dark plumage. It also possesses the largest eyes of any living land animal, measuring about 2 in (5 cm) in diameter—roughly the size of a billiard ball.  This bird prefers munching on roots, leaves, flowers and seeds, though it wouldn’t say no to the occasional insect or small reptile. Unsurprisingly, it also lays the largest egg in the world—about 5.9 in (15 cm) long and weighing up to 3.3 lbs (1.5 kg)!

Much of the ostrich’s height comes from its long, two-toed legs, which can cover a distance of 10-16 ft (3.05-4.9 m) in a single stride. It’s these same lengthy limbs that give this feathery giant a tremendous advantage in perilous situations. While the cheetah has a faster maximum speed in short bursts, an ostrich can easily outrun it over extended distances. An average ostrich can run at about 48.3 km/hr (30 mph) and sprint at about 64.4 km/hour (40 mph); when frightened, it can leave the cheetah eating its dust, reaching a maximum speed of 72.5 km/hour (45 mph).  All that, and we haven’t even talked about this bird’s kicking ability yet.

An untrained person’s punch would register a force of about 60-85 psi (pound-force per square inch); an average heavyweight boxer is said to be capable of hitting as hard as 1,700 psi. Meanwhile, a threatened—or angry—ostrich is said to deliver a stunning 500-2,000 psi of raw kicking power. Combined with its 4-inch (10.2 cm) talons, that’s enough to kill a hungry lion in a single hit, and certainly more than enough to kill a human being. However, deaths from ostrich kicks are rare, and are often the humans’ fault for provoking the birds in the first place.

Formerly distributed across Africa, Asia, and the Arabian Peninsula, extensive hunting has driven seven out of nine known ostrich species to extinction. Now, this majestic bird can only be found running freely in the dry African savannas—and occasionally, on random streets after escaping captivity.