Is it okay to stay up late and just sleep in on weekends? 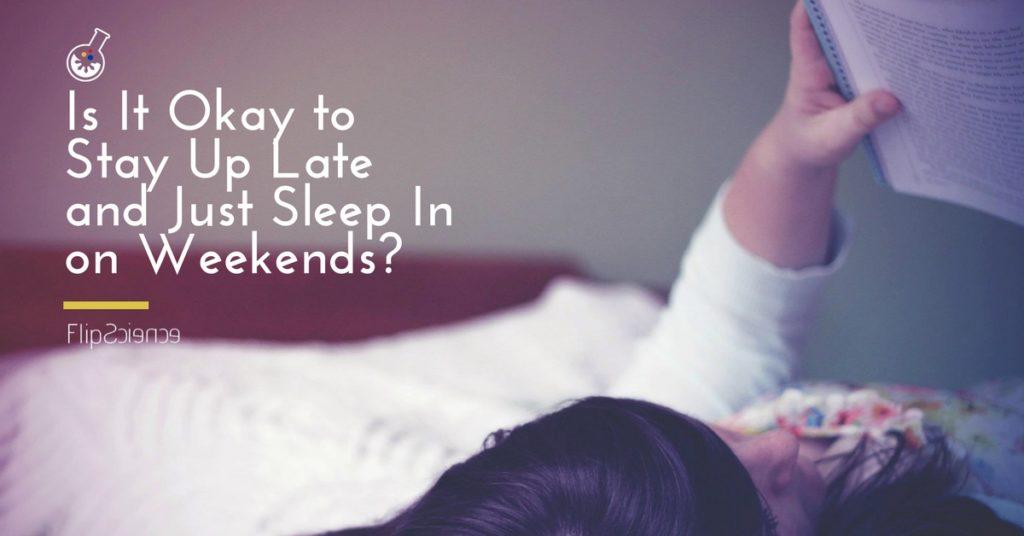 The last decade brought us remarkable leaps in sleep technology and valuable insights about sleep. For some reason, though, “I didn’t get enough sleep this week” still seems to rank right up there with “Hitler was awful” and “Bacon is awesome” on the list of sentiments shared by humanity in general.

Indeed, getting enough sleep during the week seems next to impossible to achieve. This may stem from an unhealthy workload, a lack of prioritization, or simply poor life choices. Either way, the end result is sleep deprivation, a condition that affects approximately half of the Philippine population.

Ever catch yourself unable to stifle a yawn or several at your workstation? Have you been forgetting to do things that don’t normally slip your mind? Feel more motivated to finish off the sliced bread in your office pantry than to do some actual work? Those are all signs that you may need to sleep more.

The favored solution of many a sleep-deprived student or overworked employee? Sleeping in during the weekend, mainly to make up for all those lost hours.

Unfortunately, getting enough sleep involves much more than simple arithmetic.

As it turns out, compensating for sleep-deprived weekdays with sleep-loaded weekends could do your body more harm than good.

The problem here isn’t just the number of hours you sleep. Rather, it is the consistency of your sleep pattern throughout the week. To describe the mismatch between your sleep pattern and your internal body clock (specifically, the 24-hour cycle of bodily processes it regulates, also known as your circadian rhythm), experts came up with the term “social jet lag.”

Researchers from the University of Arizona recently conducted an evaluation of almost 1,000 adults aged 22 to 60 based on their weekly sleeping habits and general health condition. Findings revealed that with each hour of sleep shifted, your heart disease risk goes up by 11 percent. This sleep shift also increased the likelihood of a subject describing their health as “poor” or “fair” by 28 percent.

On top of that, irritability and fatigue were more evident in people who suffered from social jet lag. These associations — the occurrence of one condition when another is present — between social jet lag and impaired health manifested, even with income, education, and other aspects factored in.

“With social jet lag, you are more likely to have heart disease, to feel fatigued, to feel tired and to have a worse mood.”

Meanwhile, a researcher from Sweden published her findings on the sleeping habits of about 2,700 upper secondary school pupils. Orebro University’s Serena Bauducco revealed in her doctoral thesis that the subjects (aged 13 -16) slept late on weeknights and snoozed for longer hours during weekends, affecting their sleep cycle.

According to Bauducco, the pupils ended up feeling jet lagged, showing a correlation between this condition and impaired learning ability. Additionally, teens who showed signs of sleeping difficulties also had thrice as many absences from school.

“We also checked other things that may be related to a high level of absence — for example bullying, depression and anxiety,” says Bauducco. “But the correlation between difficulties sleeping and why they did not go to school was very clear.”

Interestingly, the teenagers who had difficulty sleeping early during weekdays were the same ones who brought their mobile phones and devices with them to bed.

It’s important to understand that both studies measure associations, but don’t necessarily prove causality. In other words, they do not say that social jet lag causes heart problems, learning difficulties, or a sour mood. What the findings demonstrate, though, is that whenever social jet lag is in play, the aforementioned negative health conditions become more likely to show up. Incidentally, previous researchers established a possible connection between social jet lag and obesity as well.

Sleeping in? Sleep on time instead

“It shed light more on the fact that we need to have more of a consistent sleep-wake schedule in addition to a regular and sufficient amount of sleep,” Avidan said.

Dr. Avidan also suggests keeping artificial light, gadget use, and alcohol consumption to a minimum before bedtime. This ensures that you can get enough sleep with ease — and lets you do more with your weekend than just sleeping in.