Vaping: Is it truly better than smoking? 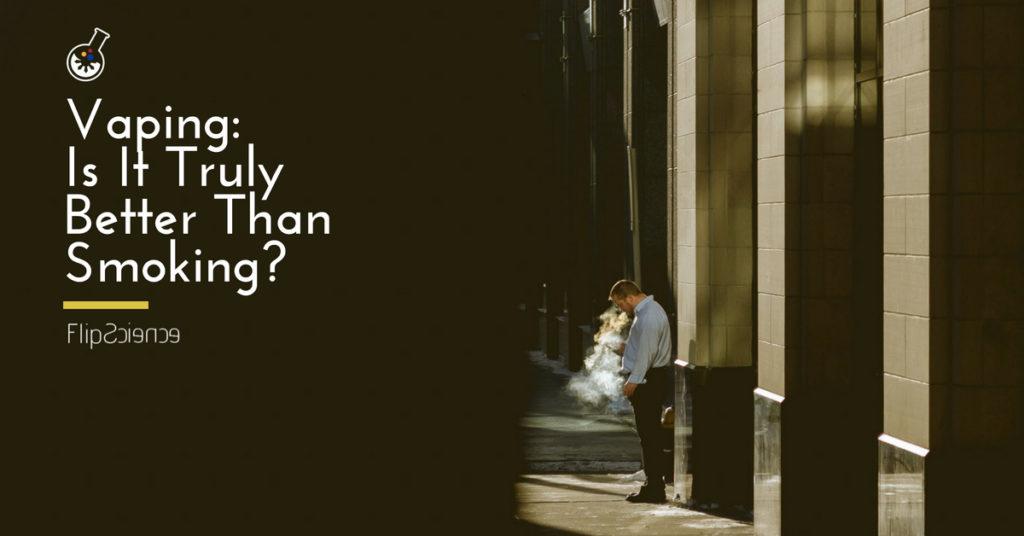 Some people splurge on things such as overpriced coffee, fancy food, or even alcohol from time to time. Others are so hooked on their self-indulgences that they fail to consider the consequences of their actions. Chained to their vices by addiction, these individuals seek their objects of obsession as if these were vital to their survival. Cigarette smoking — fueled by nicotine addiction — is one of the clearest examples of this: a vice that traces its roots to tobacco farmers in the Andes 5,000 years before the Common Era (BCE).

Smoking as a part of culture

We see all sorts of health warnings for smoking and its ill effects. Aside from posters and infographics, cigarette boxes (as mandated by law) now feature illustrations of victims of the diseases that cigarette smoking may cause.

The first recorded warning against the possible detrimental effects of smoking was published by an anonymous English author in 1602 — yet up to now, humans still continue to smoke. There are myriad ways smokers justify their habit. Often, they mention the help it provides for problematic situations, saying that smoking allows the user to feel a sense of calm and be temporarily relieved from anxiety. Some do it for the sake of social integration, with smoking being a part of their usual social activities. Some love the sensation that smoking brings, and even pair it with alcohol for better effect. In summary, every smoker has a personal reason to do so, disregarding the known impacts of smoking on the body.

Last year, the Duterte administration issued Executive Order 26, enforcing a nationwide smoking ban for all citizens. Action on Smoking & Health Philippines Project Officer Rommel Arriola states that the target is for every local government unit to fully implement the order and to comply with the World Health Organization (WHO) Framework Convention on Tobacco Control (FCTC).

In 2015, the Global Adult Tobacco Survey (GATS) noted that 15.9 million adults in the Philippines smoked tobacco, comprising 22.7% of the country’s population. Results also showed that four in every 10 men smoked tobacco (40.3%), while only 5.1% of women used tobacco for smoking.

The effects of smoking

According to the National Cancer Institute, out of the 250 known harmful chemicals placed in tobacco smoke, 69 are carcinogens — substances that have the potential to cause cancer. These chemicals include arsenic, formaldehyde, polycyclic aromatic hydrocarbons (PAHs), and acetaldehyde. Smoking significantly increases the risk of developing lung cancer by 25 times for men and 25.7 times for women. It’s not just lung cancer smokers should worry about, either, as these carcinogens also increase the risk of cancer for organs anywhere in the body such as the bladder, blood, colon, liver, and kidneys.

In addition, cigarette smoking increases the size of the mucus-producing cells in your lungs. Unsurprisingly, this leads to increased mucus production. Smoking also produces tar that, when inhaled, deactivates the cilia, the hairlike strands in your lungs tasked to sweep the mucus upward and out of your body. This combination of factors could result in the inflammation of your airways, increasing their risk for infection via harmful external pathogens.

Smoke also brings forth carbon monoxide to the user’s system, negatively affecting the blood’s capacity to carry oxygen to the different vital organs of the body. The heart would try to compensate for this damage by pumping more blood, eventually straining itself in the long run. Furthermore, smoking also damages the lining of one’s arteries, causing the deposition of a fatty material known as atheroma. Coupled with all its other effects, it may double or even quadruple the risk for coronary heart disease and stroke.

On top of all that, smoking creates a higher risk of miscarriages in pregnant women. It also increases the likelihood of an ectopic pregnancy, wherein the fertilized egg does not travel down to the uterus and latches on to the oviducts instead. This would require methotrexate medication or even surgery. Last but not the least, smoking may also heighten the risk of erectile dysfunction in men.

Aside from the detrimental effects posed to the smoker, tobacco smoking also heavily affects the smoker’s immediate environment — and that, of course, includes the non-smokers around the smoker.

Secondhand smoke is defined as the combination of the smoke given off by the cigarette and the smoke exhaled by the user himself during the act. The US Environmental Protection Agency, the US National Toxicology program, and the International Agency for Research on Cancer have already classified smoke as a human carcinogen. To add, exposure to smoke also causes irritation in the lungs and harms the heart and the blood vessels, much like how actual smoking does.

The plethora of ill effects brought about by smoking eventually led to a search for a better alternative.

In 1963, Herbert Gilbert devised a “smokeless non-tobacco cigarette”; however, it was not commercialized back then. After 40 years of stagnancy and continued reliance on traditional cigarettes, Chinese inventor Hon Lik created his own version of the e-cigarette in 2003. This served as the template for the modern e-cigarette devices used today. The device first became popular in China, providing a safer alternative for a population wherein six out of 10 men are smokers. After only five years, the e-cigarettes made it to US shores, daring to capitalize on the global giant’s smoking market.

In comparison to traditional cigarettes that only use cigarette paper, tipping paper, filter, and a tobacco rod, e-cigarettes utilize a different system. They use a replaceable inhaler cartridge containing glycerin, polyethylene glycol, flavoring, and the usual nicotine. Inhalation from the user triggers the sensor to vaporize a small amount of the liquid. The resulting vapor is then drawn to the user’s mouth, simulating traditional cigarette smoking. This process is called vaping.

The main difference is that vaping does not involve burning tobacco, significantly limiting the user’s intake of tar, arsenic, and the other chemicals mentioned earlier. To add, e-cigarette proponents stress that all the chemicals in inhaler cartridges (such as polyethylene glycol) are FDA-approved. A study in the research journal Tobacco Control supports this, revealing that the amount of toxic chemicals found in e-cigarettes is approximately nine (9) to 450 times lower than its older counterpart.

Think vaping is completely safe? Not so fast

Despite the hype for vaping, however, many studies have revealed some startling findings about it.

In at least one instance, exposing laboratory cells to e-cigarette flavorings resulted in their eventual inability to replicate. A study by Crotty Alexander found that exposure to e-cigarette vapors caused bacteria such as Staphylococcus aureus to create an added coating termed ‘biofilm’, making it harder for them to be eradicated. This suggests that vaping may worsen bacteria-caused lung infections.

Another study has also shown that long-term vaping can double the risk of suffering from a heart attack. (Traditional cigarette smoking still poses a greater risk, though — three times, to be precise.) It’s worth noting, however, that the aforementioned study is a correlational study, which means it cannot prove that the increased risk was solely due to vaping.

It has only been about a decade since the spread of e-cigarettes in the global market. Thus, only a few studies have explored the long-term effects of vaping.

The National Academies of Science, Engineering, and Medicine published a comprehensive report on e-cigarettes pooled from approximately 800 peer-reviewed studies. As cited by Erin Brodwin in an article for Business Insider, the report concludes that there is substantial evidence that young people who use e-cigarettes are more likely to use conventional cigarettes later on in their lives. Not surprisingly, vaping was also identified as a potential transition tool for adult users seeking to quit smoking.

To add, e-cigarettes use lithium batteries, which may explode and can cause significant injury to the user. Also, any intake or contact with the chemicals inside the inhaler cartridge may result in seizures, vomiting, or (in extreme cases) brain injury.

The bottomline: It’s all about the nicotine

In the face of the ongoing discussion regarding the effects of smoking and vaping, there remains one common denominator: Both hinge on nicotine addiction.

Traditional cigarettes allow users to retrieve nicotine through the burning of tobacco. On the other hand, e-cigarettes simulate the same activity to release the chemical in vapor form. In essence, it is nicotine addiction that prompts smokers or vapers to continue puffing, eventually leading to the detriment of their health.

Nicotine provides pleasure to the body by latching on to the receptors that are usually targeted for neurotransmitters — the chemicals that allow the nervous system to transfer information. For example, a neurotransmitter such as acetylcholine allows the body to be more alert and focused by latching on to its dedicated receptor. Nicotine has the uncanny ability to replicate this mechanism and latch on to the same receptor, thereby inducing the same effects. Same goes for dopamine, a neurotransmitter in charge of your body’s reward system for pleasure. This is the reason why dopamine levels spike during an activity that grabs a person’s interest. However, the same emotions can also be triggered itself by nicotine, eventually leading to your smoking (or vaping) addiction.

Through the continued use of nicotine, the body will be acclimatized to consider it necessary for proper functioning and survival. Given that the body does not produce it, a nicotine addict would be strongly compelled to find ways to obtain it. The price of a pack of cigarettes start at approximately 50 pesos, while discounted e-cigarette kits may even cost only Php 100: a seemingly small price to pay for a habit that costs so much more in the long run, literally and otherwise.

All things considered, vaping may be better for one’s health than smoking. Still, it is merely another option to further fuel addiction. At the end of the day, the issue rests upon whether or not an individual would allow something external and material to take control over — and determine the eventual outcome of — his or her life. –MF