The race to save the Philippine pangolin

Published on February 23, 2020 by FlipScience Staff 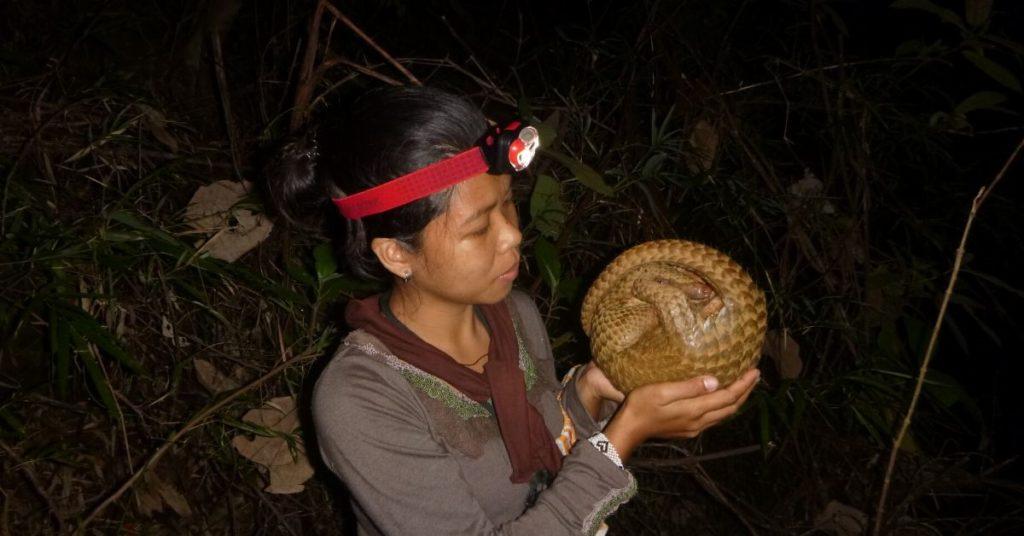 •There is a significant knowledge gap regarding the critically endangered Philippine pangolin (Manis culionensis) or balintong, hindering efforts to save the species.
•The United States Agency for International Development (USAID), the Palawan Council for Sustainable Development, and other partners in Palawan ran an intensive field study on the species.
•Apart from identifying challenges in pangolin conservation, the groups are pushing for improved enforcement of wildlife laws in Palawan.

The global clamor to save all eight species of the pangolin is thrown again in the spotlight, with these scaly anteaters recently tagged as a possible link to the Wuhan coronavirus outbreak by a study, which is yet to be published and evaluated.

It’s too early to tell whether this can deter the lucrative demand for pangolin scales and meat in Asian black markets. But one species—the Philippines’ very own pangolin—stands to lose the most if illegal wildlife trade remains business as usual. 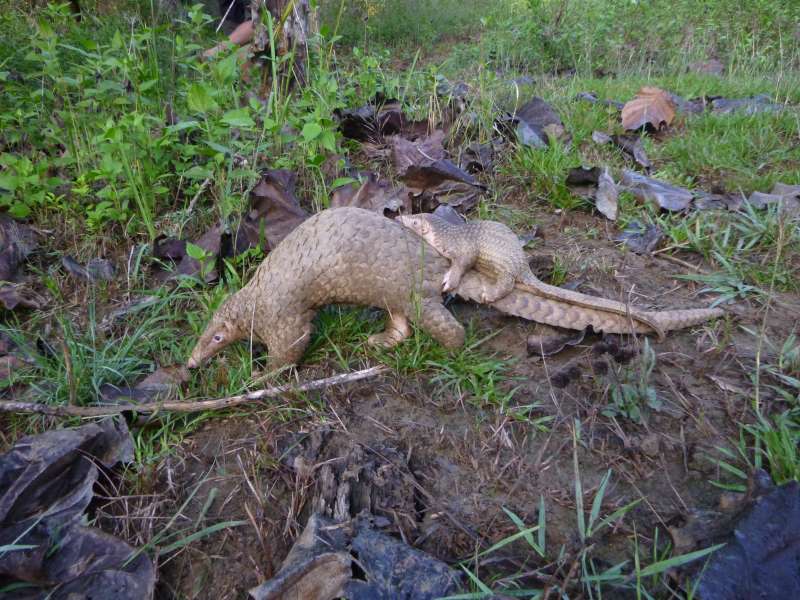 A mother and baby pangolin recorded by researchers of Katala Foundation during a field expedition for the USAID-funded study on Philippine pangolins. (Image: USAID Protect Wildlife and Katala Foundation)

Found only in the islands of Palawan, the Philippine pangolin (Manis culionensis) or balintong has the smallest range compared to its cross-border cousins. Despite an international trade ban on pangolins, traffickers have turned their attention to the rare balintong as native pangolin populations in other countries have rapidly declined due to massive poaching. In September 2019, more than 1,150 kilos of dried pangolin scales—from an estimated 3,200 individual pangolins—comprised one of the largest wildlife by-product seizures in Palawan’s capital Puerto Princesa. Such persistent trends in wildlife trafficking have led the International Union for Conservation of Nature to raise its Red List classification for the Philippine pangolin from Endangered to Critically Endangered.

Making matters more difficult is the limited information we have about the Philippine pangolin. This lack of knowledge hampers the ability of conservationists and local authorities to establish proper baselines for protecting the remaining pangolin strongholds in the wild. This research gap prompted the United States Agency for International Development (USAID), the Palawan Council for Sustainable Development, and other partners in Palawan to lead an intensive field study on the Philippine pangolin.

The USAID-funded study ran from 2018 to 2019 and focused on Palawan’s Victoria-Anepahan mountain range, a 165,000-hectare key biodiversity area with no existing legal protection and conservation measures. The study used a combination of methods to record the presence of pangolins in the area, examine their forest habitats, and identify threats to their survival.

One research method involved scouring the Victoria-Anepahan to search for live pangolins. In the dead of night, researchers of Palawan-based Katala Foundation, together with local guides and dogs, looked for clues in the forest—ant and termite trails, tree scratches, ground diggings, and scent marks—that can lead them to a pangolin. After identifying a pangolin, the team records its location and takes its measurements before releasing it back to the wild.

After 12 grueling expeditions surveying 2,400 hectares of forests, the team found only 17 individuals, including a nursing baby, juveniles, and pregnant pangolins. They did not find a single pangolin in half of the expeditions. Survey leader Dr. Sabine Schoppe of Katala Foundation says this pangolin count is much fewer compared to similar ground surveys they did in other areas of Palawan between 2013 and 2015.

The same finding reflects the results of another method that used camera traps with motion sensors to take photos of wildlife on the forest floor in five large plots near the ground survey sites. The team set up more than 30 cameras in each of the 3,300-hectare plots. After more than 7,300 trapping days, the cameras recorded around one to four pangolins in each plot. This count rate is low compared to other animals captured on camera many times. Regardless, the photos prove that diverse wildlife—including Palawan endemics like the porcupine, stink badger, bearded pig, peacock-pheasant, and leopard cat—are thriving in Victoria-Anepahan.

Despite this rich biodiversity, the field expeditions also uncovered destructive activities—logging, hunting, and slash-and-burn farming—that pose a serious threat to pangolins and other wildlife in the mountain range. In one expedition, the research team surveyed a heavily logged area and described it as an “empty forest” with hardly any vertebrate species in sight. The study also interrupted illegal logging activities, with chainsaw operators even intimidating the research team on one occasion.

Correlating the data on pangolin sightings and forest conditions, the study showed fewer pangolins and potential pangolin dens in areas with more biodiversity threats. The data also validated that more pangolin dens can be found in areas where there are more abundant food sources. 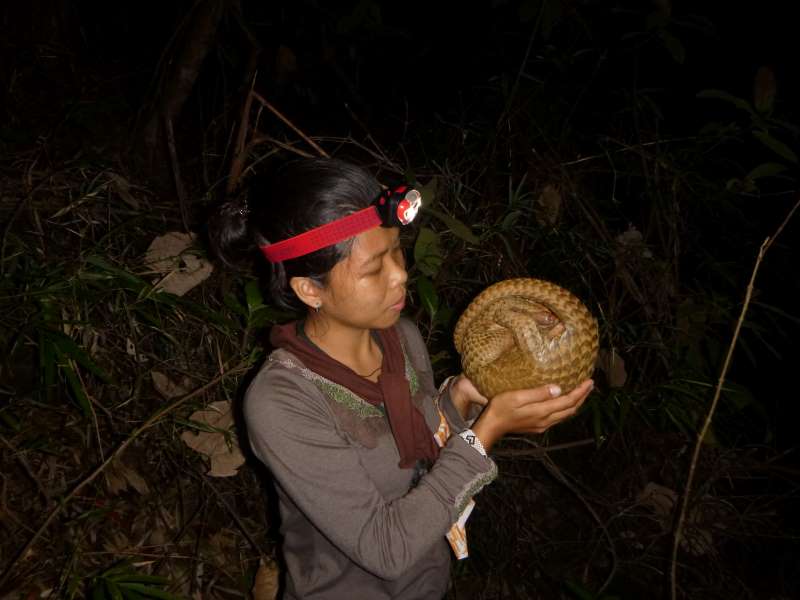 A mother and baby pangolin recorded by researchers of Katala Foundation during a field expedition for the USAID-funded study on Philippine pangolins. (Image: USAID Protect Wildlife and Katala Foundation)

Another method in the study led by Palawan State University involved gathering information from selected indigenous communities in Victoria-Anepahan about their traditional uses of pangolins, common hunting methods, and practices in the illegal pangolin trade.

Interviews and focus group discussions with more than 380 respondents from 18 barangays or communities confirmed a decline in pangolin sightings in their respective areas across the years. Respondents said that pangolin poaching and trafficking continue as long as there is a demand from active buyers, both foreign and local. Buyers and hunters in Victoria-Anepahan come from as far as Puerto Princesa and northern towns in Palawan.

Respondents mentioned how the illegal trade of pangolins grows worse due to poverty, lack of jobs and livelihood, and the opportunity to make easy money at the expense of wildlife. Fresh pangolin scales can fetch for up to PHP 4,500 (USD 90) per kilo, while dried scales can command up to PHP 7,000 (USD 140) per kilo. Pangolin scales, like rhino horn, are made from keratin found in human hair and fingernails. They are highly prized in traditional Asian medicine as a cure for various illnesses, although there is zero evidence to support this claim.

Pangolin meat—a delicacy in exotic Asian cuisine—can sell for up to PHP 3000 (USD 60) per kilo, while a live adult pangolin can command up to PHP 15,000 (USD 300). From Victoria-Anepahan, pangolins and their by-products are brought to Puerto Princesa or Mindoro and then shipped to Batangas before they reach their destination. Pangolins are also brought southward via Balabac and then shipped to Malaysia.

Respondents revealed how pangolin meat, blood, and scales sometimes become part of their subsistence diet, indigenous rituals, and traditional medicine. But there has been a significant shift in these practices, particularly among the indigenous youth. These days, communities are learning more about wildlife laws and penalties from local authorities.

Yet community responses also point to how authorities often fail to enforce wildlife laws, such as when they are too lenient with offenders or are not present on the ground to apprehend poachers and traffickers. Indigenous leaders and community members showed how they can actively involve in wildlife protection efforts by warning outsiders and migrants against hunting pangolins in their area, and by expressing their interest in forest guard training.

Beyond the study, USAID is contributing to efforts to boost competencies of government authorities and partners in Palawan in enforcing wildlife laws. USAID has supported training and mentoring on improved enforcement practices for community-based enforcers, park rangers, forest guards, government personnel, and law enforcement units in the province. Promoting multiagency coordination has also led to successful operations, such as the arrest of wildlife traffickers and the rescue and release of live pangolins in northern Palawan in October 2019 and January 2020.

Using the findings of the study, specific priority areas for pangolin conservation in Victoria-Anepahan can now be drawn from sites with the most number of pangolin sightings and with fewer threats to forests and wildlife. Conservationists, communities, local governments, and the academe can also use the findings in identifying other critical habitats for pangolins in Palawan.

USAID and its partners are looking forward to tapping into homegrown research and science-based recommendations for developing a Philippine pangolin conservation plan. Led by the Palawan Council for Sustainable Development, all stakeholders will work together to craft a comprehensive plan that will strengthen efforts on management, enforcement, advocacy, and further research to help protect this elusive yet important species.

To this, Acting Executive Director of PCSD Staff Atty. Adelina Benavente-Villena added that coordinated efforts to combat wildlife trafficking must be sustained by all partners and elevated as a top priority.
“Illegal wildlife trade is organized crime and it can only be stopped through organized action,” she said. “Our concerted efforts from all concerned sectors and citizens in Palawan will be the key to finally suppressing wildlife crimes for good.”—USAID Protect Wildlife Project

Through its Protect Wildlife project, USAID is working with partners in the government and various sectors to reduce threats to Philippine biodiversity—such as illegal wildlife trade and habitat loss—by helping partners and stakeholders strengthen policies and actions toward improved practices in conservation and enforcement.

To know more about the USAID-funded Philippine pangolin study, you may contact Lawrence San Diego, the Communications Manager of the USAID Protect Wildlife Project, at lawrence_sandiego@dai.com.