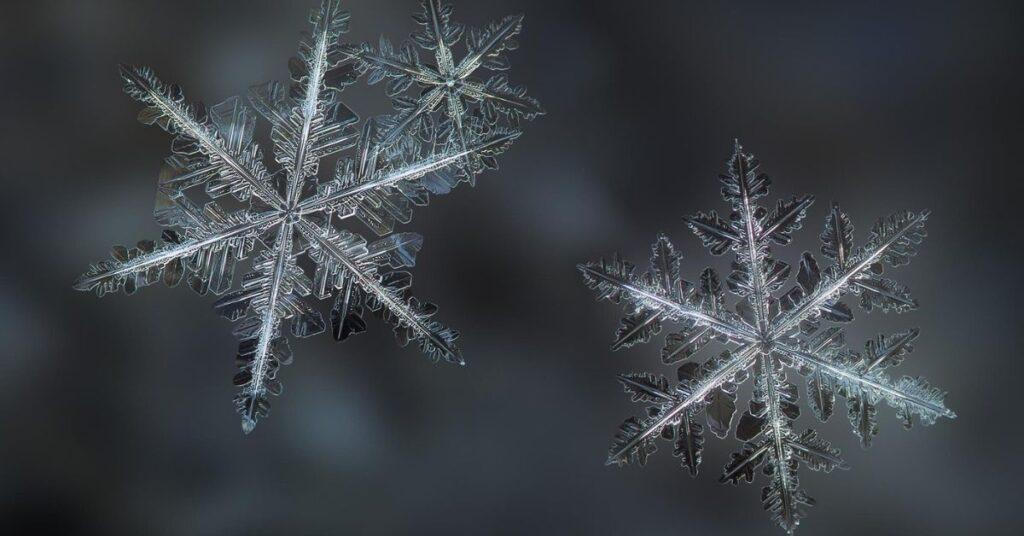 Snowflakes truly are a marvel of nature. Formed in ways that ensure their uniqueness, finding two precisely identical snowflakes in the wild is close to impossible. There’s one thing that all of them have in common, though: each one you find will have six sides.

Snowflakes are made up of ice or snow crystals that are symmetrical, reflecting the internal order of the water molecules within them. Through a process called crystallization, these molecules arrange themselves in predetermined spaces, forming a snowflake with six arms that grow based on temperature and humidity. This hexagonal structure is the most efficient arrangement for water molecules to join together; hence, all snowflakes end up with six main branches.

What makes each snowflake unique is the path it follows from its formation in the sky all the way to the ground. No two snowflakes will encounter the exact same atmospheric conditions; even the slightest changes in temperature or humidity will result in patterns that no other naturally formed snowflake will replicate. Low humidity produces simple, basic hexagonal designs, while increasingly intricate structures are created at higher humidity levels.

However, Dr. Kenneth G. Libbrecht, a professor and snowflake expert at the California Institute of Technology, was able to create two snowflakes with almost exactly the same pattern by placing two crystal seeds side by side and growing them in a controlled environment. He called them “identical twin” snowflakes; while they look similar due to the conditions in which they were made, they’re still not 100% copies of each other on a molecular level.

As for finding identical snowflakes in the wild, Dr. Libbrecht had this to say: “It’s like shuffling a deck and getting the exact same shuffle for 52 cards. You could shuffle every second for the entire life of the universe, and you wouldn’t come close to getting two of the same.”

Today’s Science History Milestone: On December 26, 1898, French scientists Marie and Pierre Curie informed the French Academy of Sciences that they discovered a very active substance that, chemically, behaved similarly to pure barium. They also suggested a name for it: radium.