Published on May 31, 2020 by Mikael Angelo Francisco 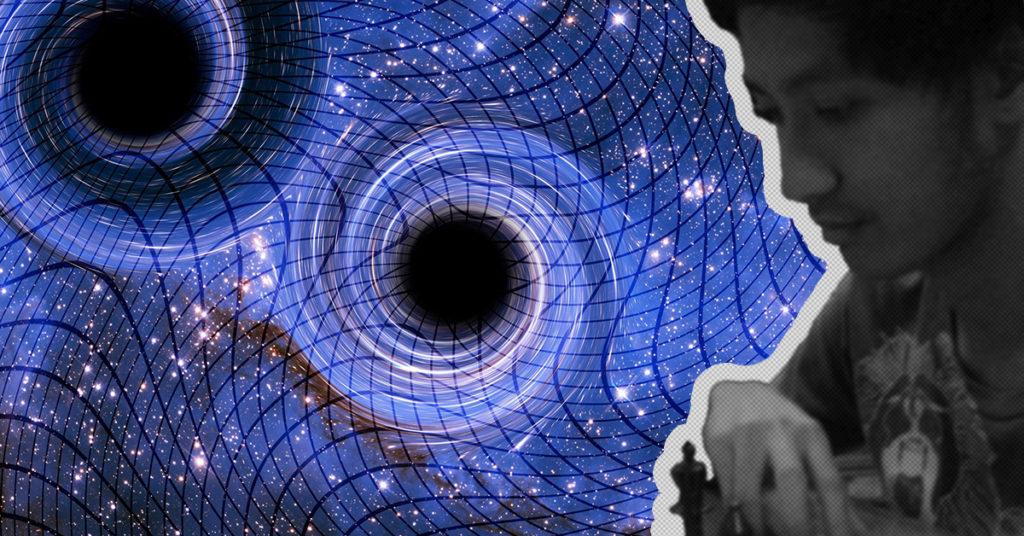 Very few people can say that they went through life knowing where they wanted to be from the very beginning. After all, life is less of a linear road and more of a series of twists, turns, and occasional dead ends. More often than not, though, passion’s gravity-like pull is too strong to resist, no matter how many detours you take—and Reginald Christian Bernardo, the Philippines’ first homegrown gravitational physicist, can certainly attest to that.

“[My physics journey] is definitely far from the straight path,” revealed Bernardo, who finished his undergraduate and master’s degrees in Physics at the University of the Philippines Diliman. “I’m not from a science high school, and I was even in a seminary for nearly two years.”

The young physicist’s story exploded on social media after he completed the last requirement for his doctorate on May 22. In a livestreamed video conference, he defended his dissertation before a panel composed of some of the country’s premier physicists.

Just like you and me—but with a kickass gravitational physics PhD. (Reginald Christian Bernardo)

Bernardo’s longstanding love for science played a big part in getting him on the Physics track. (In fact, if he didn’t become a physicist, geology would have been his next option.) Oh, and a certain webslinging Marvel superhero had something to do with it, too.

“What first pulled me to pursue a career in physics, other than being webbed into it by Peter Parker, is physics’ history-proven potential for improving our way of living and being the intellectual trophy that it is, in the form of electromagnetism, quantum mechanics, and relativity, to name a few.” (In the comics, Spider-Man has a master’s degree in biophysics and an unfinished doctorate in biochemistry.)

We’ve all heard that oft-repeated line about how in movies, every disaster begins with someone ignoring a scientist. Looking at it from a different perspective, it highlights how pop culture frequently presents scientists as key figures, sometimes even superheroes. “It’s cool to have a superpower,” Bernardo quipped, “and the closest thing we have to superheroes today are scientists.”

Bernardo also touched upon his brief stint as a seminarian. “I was in there basically to be immersed in the way of religious living,” he shared, adding that he was only able to stay there for a year and a half. Regardless, he acknowledged the fact that he has many good friends in various scientific disciplines who are religious.

“It may very well be beyond me to answer whether religion and science can’t coexist. As far as I am concerned, the Universe has existed for nearly fourteen billion years, and it is up to us to understand it using the scientific method.”

To put it simply, a gravitational physicist takes the implications and principles of what we understand about gravity, space, and time, and applies it in various research subjects, including (but not limited to) the science behind black holes, numerical relativity, and relativistic astrophysics.

“Gravity is the reason we fall, and with no exception, the force that we all must come to terms with before being able to stand with our own,” explained Bernardo. “Anything with energy creates gravity and attracts everything around it. However, heavier or rather more energetic objects attract more. For this important reason, you won’t feel this attraction towards people, but we still all could fall down to the ground at any time, because Earth is much heavier than the seven billion people in this planet combined.”

As Bernardo put it: “It is gravity that brings order to an otherwise chaotic Solar System, and gives birth to all of the stars and galaxies out there.”

An article from Scientia, the official student publication of the UP Diliman College of Science (CS), shared a short recap of the Philippines’ first dive into the realm of gravitational physics. Established during the late ’70s or early ’80s, the first relativity group in the Philippines (which included only faculty members, not students) was led by Dr. Roger Posadas, the first CS dean, who earned his doctorate from the University of Pittsburgh.

Fast forward to 2016, shortly after gravitational physicist Dr. Ian Vega returned to the country upon completing his PhD at the University of Florida. “Very soon after, he established the first active Gravity Group in the country,” recalled Bernardo. “Before the advent of the Gravity Group, there was just no principal investigator who specialized in gravitational physics in the country. Because of this, Ian Vega and [Dr.] Reina Reyes needed to do the hard work of getting their astrophysics and cosmology training abroad.”

Under the guidance of Vega and other experts at the UP National Institute of Physics (NIP), the group has extensively studied and investigated black hole physics, astrophysics, and cosmological dynamics. Bernardo joined the group in 2018 after obtaining his master’s degree. Vega became Bernardo’s advisor on his journey towards being the first to locally obtain a gravitational physics PhD—a path that, according to the latter, was made possible by the “undeniably important contribution” of the former.

Spooky action at a distance

In a rather convoluted comic book story, Peter Parker ended up completing his PhD (which has since been revoked) with unsolicited help from his archnemesis, Doctor Octopus. Of course, things don’t work that way in real life, not even in the middle of a pandemic.

Thus, Bernardo had to defend his dissertation via digital conference. When done in an auditorium, it’s enough to send chills down the spines of even the most steel-willed students. It’s no less challenging when you have to explain your work to a group of physics experts who aren’t even in the same physical location—and the only audience member actually in front of you is your computer screen. 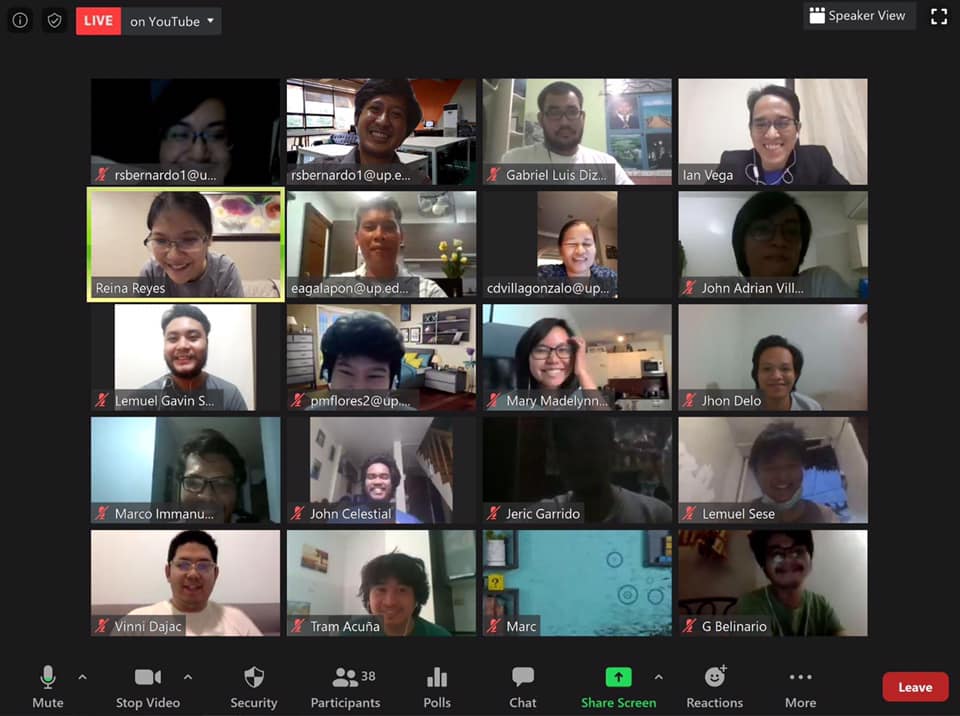 The physicists and experts who witnessed history in the making. (Reina Reyes)

“It was definitely harder to give a talk without seeing my audience,” admitted Bernardo. “But I’ve gained a new skill and might even consider a chess twitch stream in the future. Also, the remote thesis defense did reach a lot more people compared to what could have been in an auditorium. Hopefully, it could show our young talents that we could be as good, or even better, in doing scientific research as compared to other countries.”

The title of his PhD thesis alone is enough to make any non-physicist’s head spin: Compact Objects, Cosmologies, and Gravitational Perturbations in Scalar-Tensor Theories of Gravity. “The search for a fundamental description of dark matter and dark energy, among other cosmological puzzles, demands that we look at general relativity within the broader framework of alternative theories of gravity, building on the legacy of giants such as Newton, Einstein, and Hawking,” explained Bernardo.

“In my PhD thesis, I worked with the simplest [alternative theory], known as scalar-tensor theory, and analyzed its gravitational content by looking at its black hole and cosmological solutions. Black holes are important because we expect the most interesting deviations from Einstein’s theory in places where gravity is at its strongest.” 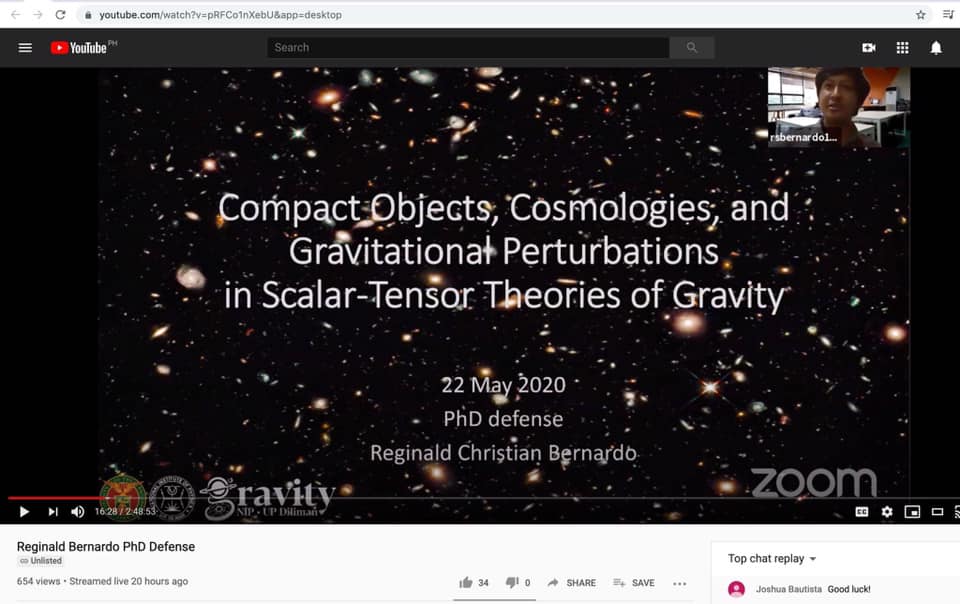 When news of his accomplishment hit the internet, comment sections were flooded with congratulatory messages and expressions of Pinoy pride. However, quite a few netizens showcased their humorous sides as well. A number of them (perhaps—hopefully—sarcastically) wished that Bernardo could come up with a cure or vaccine for COVID-19, an apparent failure to distinguish between “physicist” and “physician.” While some felt that this was evidence of Filipinos’ lack of reading comprehension skills and education, Bernardo found it entertaining, taking it all in stride. He even expressed his delight at how his friends turned the “physicist/physician” joke into a meme.

“Looking at the bright side, I think netizens have learned that there are Filipino physicists who are actively participating in the quest to understand the dark Universe,” affirmed Bernardo. “I am even very happy to share that many of them are very proud to have learned that a Pinoy is doing work in gravity, as they have expressed admiration in a striking number of private messages. All students of science in our country need this encouragement.”

With the public’s perception of physics as a subject that can be too difficult, a bit of encouragement is certainly welcome. According to Bernardo, instead of trying to understand physics concepts on his own, he did so with the help of friends who shared his passion. This made it easier for him to learn an otherwise challenging subject. He added that the Gravity Group welcomes anyone with even the slightest interest in understanding gravity. “There is now a well-established Gravity Group in the country, all members of which are human, who’d love to share a drink with you, play board games, and listen to your stories about love, music and poetry.”

He also shared this bit of advice: Don’t let all the numbers and formulas scare you off. “Physics always seems to demand a bit of mastery of algebra and calculus. But while that is true, physics is, first of all, science—and it requires only the scientific method.”

In an article from the Philippine News Agency, Department of Science and Technology (DOST) Secretary Fortunato dela Peña was asked about the practical applications of Bernardo’s work.

While such questions are understandable, it would greatly benefit Filipinos, including legislators and policy-makers, to embrace science and research in a way that transcends the desire for instant gratification. After all, without theories to translate into practical applications, we wouldn’t be enjoying electricity, nuclear energy, nanotechnology, GPS, and the various modern-day technologies at our disposal.

“Theory and applied sciences work together in the longstanding quest of understanding nature, improving the conditions of life, and confronting the boundaries of human intellect,” stressed Bernardo. “Most importantly, theories are the concise ways in which we put together experimental work and lay the groundwork for forthcoming technological revolution. [A theory] is an intellectual trophy of centuries. We should support Filipino theorists and be proud of them.”

“I wonder how everyone would feel if Albert Einstein or Werner Heisenberg were Filipino.”

Reyes, who was part of Bernardo’s dissertation panel, shared that she felt “deep admiration and great hope” after witnessing his defense. “It means that the future is bright for Physics in the country. This milestone is a testament to the vision and dedication of scientists like Prof. Ian Vega, who returned to the country setting out to do pioneering work with the next generation of bright minds— and has done exactly that.”

As for Bernardo, he’s set to do postdoctoral work on the cosmological aspects of gravity at the Asia-Pacific Center for Theoretical Physics in Korea. “After a few years, maybe after a second postdoc, I’d return for a tenure-track position, doing research but at the same time mentoring young ones about gravity.”

It’s a great time for aspiring specialists in the field, too. Bernardo shared that there is a growing demand in the global job market for gravitational physicists, and even the DOST is offering a competitive salary to graduate students.

“Science is a career, and there are plenty of opportunities for students and researchers in the country.”

Connect with the Gravity Group via their official website here.