The new species were found and described across five continents and three oceans, with a dozen of the Academy’s scientists working with other researchers and experts around the world.

Species from the Philippines

In 2018, the Academy described 229 described species, 14 of which came from various parts of the Philippines.

This year, out of the 71 newly described species, five came from our country: three damselfish and two sea slugs. Check them out below.

Named after the pattern on its tail that resembles a pair of scissors (“gunting” in Filipino), Chromis gunting was one of the new damselfish species discovered in the Verde Island Passage earlier this year. The Academy worked with researchers from the Bernice P. Bishop Museum and the Hawai’i Institute of Marine Biology to describe this new fish, which is shorter than a crayon. 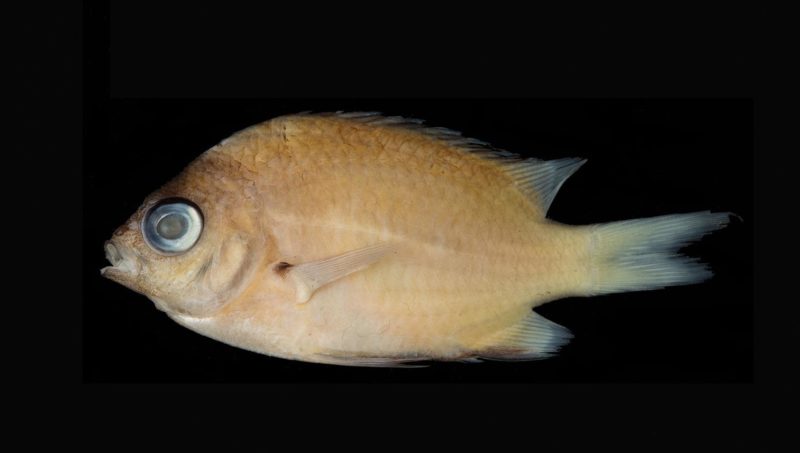 Named after the Filipino word for border (“hangganan“) and about as big as a standard pool ball, Chromis hangganan swims freely in the waters around Lubang Island, Occidental Mindoro. Black outer margins on its fins frame its yellowish body.

Chromis bowesi is another new species found in the Verde Island Passage. Nearly as long as an ATM card, C. bowesi takes its name from the late philanthropist William K. Bowes Jr., the main sponsor of the Academy’s Hope for Reefs initiative.

While it’s too early to tell if these three fish species are endemic to the Philippines, researchers have only found them in our waters so far.

Despite having described about 1/4 of all known sea slug species, Dr. Terry Gosliner is still amazed by all the new species he and the Academy uncover every year.

One example is Janolus flavoannulata, a particularly colorful and visually stunning nudibranch.

Janolus tricellarioides holds special significance to Dr. Gosliner, as it was the first new species he collected from the Philippines when he started researching the country’s marine biodiversity in 1992. After 27 years, the species finally received its official name, care of Dr. Gosliner and Dr. Marta Pola of the Autonomous University of Madrid (Universidad Autónoma de Madrid).

According to Academy Chief of Science Dr. Shannon Bennett, biodiversity experts estimate that over 90% of the world’s species have yet to be discovered.

“A rich diversity of plants and animals is what allows life on our planet to thrive: the interconnectedness of all living systems provides collective resilience in the face of our climate crisis,” said Dr. Bennett, in an official statement from the Academy.

“Each newly discovered species serves as an important reminder of the critical role we play in better understanding and preserving these precious ecosystems.”