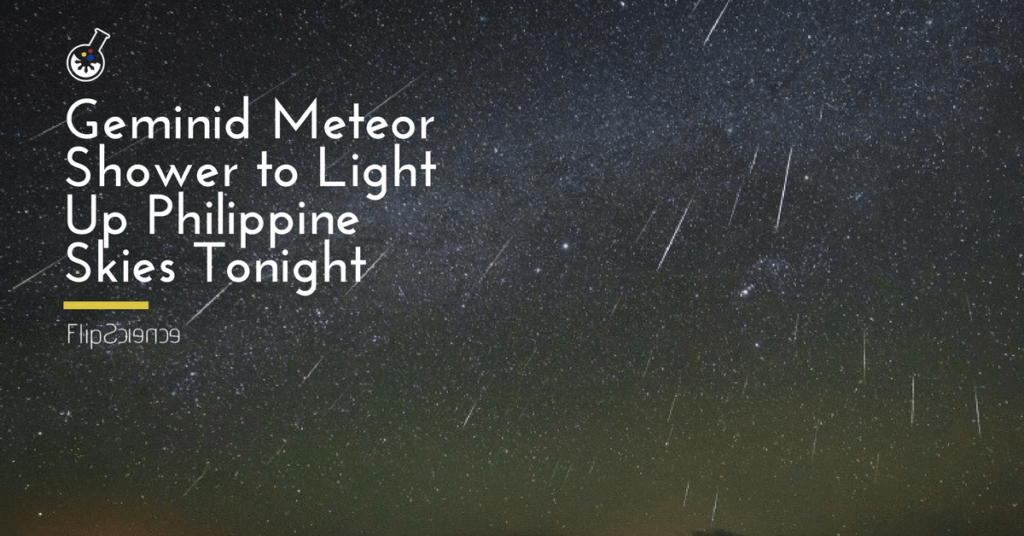 When it comes to perennial night sky treats, the month of December always saves the best for last.

Beginning tonight, December 13, the much-awaited Geminid meteor shower will reach its peak. It will display its largest average number of meteors, at a rate of 40 meteors per hour.

The Geminid meteor shower is touted as the most beautiful celestial phenomenon of its kind. This particular meteor shower is brighter and more visible compared to the other known annual displays in the night sky (which we normally call “falling stars”).

“Meteors from this shower are very rocky and gritty and slightly easier to see,” said the Philippine Atmospheric, Geophysical, and Astronomical Services Administration (PAGASA) in its monthly astronomical diary.

Astronomers expect bright, bold streaks to embellish the heavens, as the night ushers in the small hours of December 14 and the constellation Gemini ascends higher in the night sky.

Meteor showers typically assume the name of the constellation where they appear to originate. In reality, they come from rock and ice debris that certain comets leave in their paths, which the Earth crosses as it revolves around the Sun.

But the Geminid shower is different because instead of comet debris, it comes from an asteroid known as 3200 Phaethon. As Engr. Camilo Dacanay, chairman of the board of the Philippine Astronomical Society, told FlipScience via electronic correspondence:

“It originated from the disintegration into bits and pieces of 3200 Phaethon asteroid [that happened because of] the strong gravitational force by the Sun.”

According to a report from Space.com, the Geminids have long been observed since the 19th century. It was only until 1983 when Harvard College Observatory’s Fred Whipple learned that the Geminids are most likely from Asteroid 3200 Phaethon.

3200 Phaeton is a 5-kilometer-wide chunk of rock that bears the name of the Greek Sun god Helios’ scion. It is, to date, the third-largest near-Earth asteroid.

While considered a fairly small asteroid, 3200 Phaethon is classified by NASA as a “potentially hazardous” space object. The asteroid follows a path that crosses Mercury’s and Mars’ orbits. Experts have observed that its path has come closer to Earth over the last decades.

In fact, on December 16, as the Geminids wane, 3200 Phaethon will be at its closest distance to the planet. But it will be brightest tomorrow evening, December 14, because the sunlight reflected by the asteroid will be greater.

Astronomers will continue to keep a close watch on the asteroid. Meanwhile, avid sky watchers and amateur astronomers can see it via a 6-inch telescope. 3200 Phaethon’s debris will remain a bright spectacle visible to the naked eye of terrestrial observers via the Geminids.

“This meteor shower has been observed to intensify every year and, provided we [have] clear skies, [we could even see] a shower of around 100 to 120 meteors per hour,” Engr. Dacanay added.

2017 could be a lucky year for stargazers. If the weather cooperates tonight when the meteor shower reaches its peak, the moon will not swamp the night sky. Engr. Dacanay shared that the Moon is now at its waning crescent, transitioning to its new moon phase.

Last December 4, sky watchers and astronomy enthusiasts witnessed the first and only supermoon this 2017. The supermoon event happens when the moon, in its full phase, is closest to Earth.

This month’s supermoon is a prelude to more exciting sights at the start of 2018. Another supermoon will take place on January 2, followed by a must-see phenomenon—a total lunar eclipse–come January’s end. –MF