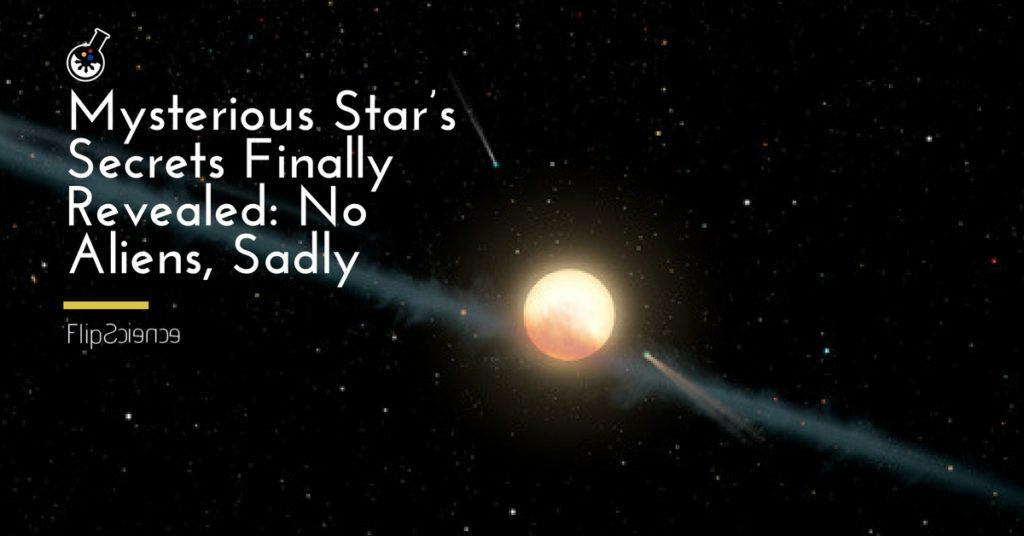 Boyajian’s Star, also known as Tabby’s Star, caught astronomers’ eyes due to a strange phenomenon — one that many believed could be a sign of extraterrestrial life.

NASA’s Kepler space telescope has observed the light of this galactic object to dim by up to 20 percent over a matter of days. In addition, the star—formally designated as KIC 8462852—has shown much subtler (but somewhat long-term) trends of this nature, with one even continuing to the present. None of this behavior can be considered normal for stars slightly bigger than the sun.

Multiple theories came to light, such as the idea that the star may have swallowed an unstable planet. Some even suggested that this phenomenon was due to a giant contraption or “megastructure” built by an alien race to harvest energy from the star, thereby causing its brightness to decrease. However, it looks as if all of these theories will finally be put to rest, as the truth appears to have been finally revealed.

Another one bites the dust

With the information gathered from NASA’s Spitzer and Swift missions—and with assistance from the Belgian AstroLAB IRIS observatory—new findings emerged, identifying the cause of this unusual behavior as an uneven dust cloud moving around the star. Unfortunately, this means that we may have to look elsewhere for evidence of extraterrestrial life.

The final nail in the coffin for all of these exotic theories: There is less dimming in the infrared light from the star than in its ultraviolet light. Any object larger than dust particles would dim all wavelengths of light equally when passing in front of Tabby’s Star. As Huan Meng, lead author of the study published in the Astrophysical Journal, explained:

“This pretty much rules out the alien megastructure theory, as that could not explain the wavelength-dependent dimming. We suspect, instead, there is a cloud of dust orbiting the star with a roughly 700-day orbital period.”

To better illustrate this: Leave your home on a sunny day and walk under an umbrella. The umbrella reduces the amount of sunlight hitting your eyes across all wavelengths. Wait until sunset, however, and you’ll notice that the sun will turn red; blue and ultraviolet light scatters due to the tiny particles. The new study suggests the objects causing the long-period dimming of Tabby’s Star can be no more than a few micrometers in diameter — about 1/10,000 of an inch.

From January to December 2016, the researchers observed Tabby’s Star in ultraviolet and infared using Swift and Spitzer respectively. Researchers also observed the star in visible light during the same period using AstroLAB IRIS, a public observatory with a 27-inch-wide (68-centimeter) reflecting telescope located near the Belgian village of Zillebeke.

Based on the strong dip in ultraviolet rays, the researchers determined that the blocking particles must be bigger than interstellar dust —  small grains located anywhere between Earth and the star. Such small particles could not remain in orbit around the star because pressure from its starlight would drive them farther into space. Dust that orbits a star (circumstellar dust) is not so small it would fly away, but also cannot be big enough to uniformly block light in all wavelengths. This is currently considered the best explanation, although others are possible.

While the study confirms the above points, it did not address the shorter-term dimming events that happened in three-day spurts in 2017. They also did not confront the mystery of the major 20 percent dips in brightness that Kepler observed while studying the Cygnus field of its primary mission.

Previous research with Spitzer and NASA’s Wide-field Infrared Survey Explorer suggested that comets could have caused the short-period dimming. Comets are also one of the most common sources of dust that orbits stars, and so they also could be related to the long-period dimming studied by Meng and his colleagues.

“From our study, we can say that the cause of the long-term dimming should be circumstellar dust grains larger than those in interstellar dust, but we cannot say what the source of the dust is,” Meng said. “It could be a swarm of comets, a recent planetary impact or residuals from billions of years of planet formation.”

“Tabby’s Star could have something like a solar activity cycle. This is something that needs further investigation and will continue to interest scientists for many years to come.”

Currently, Kepler is exploring other patches of sky in its current mission, K2. While it can no longer follow up on Tabby’s Star, other telescopes in the future could be the key to revealing more about this mysterious star. –MF