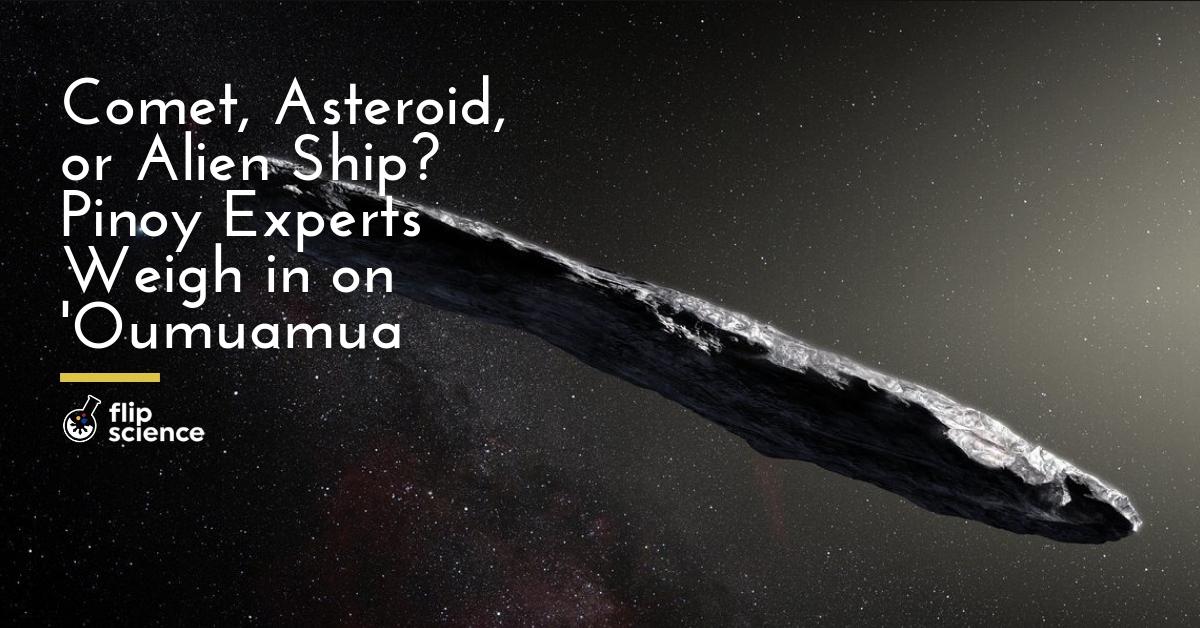 A ginormous “interstellar object” recently made headlines when Harvard researchers pondered the possibility that it was an alien spacecraft. FlipScience asked Pinoy space experts to share their thoughts.

When it was first detected by the Panoramic Survey Telescope and Rapid Response System-1 (Pan-STARRS-1) on October 19, 2017, ‘Oumuamua (Hawaiian for “messenger from afar arriving first”) was a huge mystery to the scientific community, in more ways than one.

To this day, no one knows for sure what ‘Oumuamua actually is or what it looks like. Experts liken it to a 1,300-foot-long, 130-foot-wide cigar. Strangely enough, it was also accelerating when they detected it. More importantly, it was a “visitor” from outside our Solar System.

A number of theories have emerged about ‘Oumuamua. Some researchers say it might be a comet expelling water vapor, or a stray asteroid. Others believe it is simply space debris, moving due to solar radiation. The most interesting take on ‘Oumuamua, though, is the most outlandish one.

A pair of astronomers with the Harvard-Smithsonian Center for Astrophysics (CfA), Prof. Shmuel Bialy and Department Chair Avi Loeb, examined the data gathered on ‘Oumuamua. Their study was recently published in arXiv — and in it, they mentioned the possibility that it was “a light sail of artificial origin.”

In other words, an alien-made probe or spacecraft.

Unsurprisingly, international media picked up on this. Thus, the study (and ‘Oumuamua itself) made countless clickbait-y headlines.

Not a comet? Not so fast

Sadly, it’s no longer possible to conduct further observation on ‘Oumuamua. The mysterious object is already beyond the range of our observational instruments.  Astronomers also attempted to “ping” it, but did not receive any response.

Many experts believe that we shouldn’t be too quick to hop on the “Was ‘Oumuamua an alien probe?” bandwagon, and with good reason.

For starters, it’s highly likely that ‘Oumuamua was just a typical comet. Michele Bannister, an astronomer at Queen’s University Belfast, believes that the uncertainty may have stemmed from the limitations of our observational equipment. According to Bannister, it’s also possible that ‘Oumuamua simply wasn’t expelling the amount of dust we’ve come to expect from a regular comet.

“Because of weather and what weather occurred with which telescopes on the planet, we weren’t able to potentially see the dust,” explained Bannister in an interview with The Verge.

“If this incident occurred when I was younger, I would have been very excited about this event, considering the fact that I grew up reading a lot of sci-fi literature,” said Rodion Herrera, a research assistant at FEATI University. Growing up, Herrera enjoyed Isaac Asimov’s book Nemesis, the sci-fi anime Macross, and other similar works.

Despite this, the astronomy buff doubts that ‘Oumuamua was indeed an alien probe. His skepticism is backed by physics: “[U]nless the object has really produced/trasmitted some form of (detectable) electromagnetic burst or signal, I much highly doubt if it’s a vessel of extraterrestrial origin.”

Astrophysicist and author Dr Reina Reyes also shared her thoughts. “It’s a cool study led by Harvard astrophysicist Avi Lobe, who is also one of the leaders of the Breakthrough Starshot initiative— an ambitious project to send a flyby mission to the nearest star system Alpha Centauri, 4 light years away (of course) using solar sail technology.”

Additionally, while ‘Oumuamua was the first object of its kind we’ve ever detected, there were probably millions before it. “If you think about it in that perspective,” explained Herrera, “there might have been many opportunities in the past (prior to humans having the capability to detect such events) that similar events have occurred.”

“It appears that ‘Oumuamua is the first object of interstellar origin that we have observed– so this is exciting new territory!” said Reyes.

Dr Reyes clarified that the researchers didn’t actually make any definitive claims about ‘Oumuamua’s true nature or origin. “The paper is an exercise to see if the observed acceleration can be explained by radiation pressure,” explained Dr Reyes. “Scientists find these things fun.”

Indeed, it was a single line in the paper — “Alternatively, a more exotic scenario is that ‘Oumuamua may be a fully operational probe sent intentionally to Earth vicinity by an alien civilization.” — that kicked off the fleet of headlines we saw in the past few days.

“The Harvard paper was careful in its position on the matter: While the researchers opened up the possibility of it being an artificial object, they however didn’t discount it being a natural object either,” said TJ Dimacali, sci-fi writer and former editor of GMA News SciTech.

“Snowflakes, for example, with their intricate crystalline structures, could easily be construed as artificial–especially since each flake is unique! But we take for granted that they’re made by natural, random processes. The same may be true for Oumuamua. Who knows what it went through before it passed us by!”

“Humans like to categorize things,” said Herrera, raising the possibility that the flurry of news about ‘Oumuamua was simply an issue of nomenclature. “The IAU decided to use the term ‘Interstellar Object’, which simply means that it’s an object that passes from star system to star system, mostly arbitrarily.

“However, media was fast to pick up on the fact that when the word ‘interstellar’ is used, it might denote sentience of some sort (i.e. the ability for beings to travel between stars).”

So, what WAS ‘Oumuamua — and why does it matter?

All three Pinoy experts agreed, however that we shouldn’t jump to conclusions so quickly.

“The most pragmatic explanation at the moment is, there is a lot of debris floating around in any star system, and once the orbits of such objects gets perturbed by other nearby star systems, this might trigger an alteration of their original orbits around their parent star, and off they go to ‘visit’ another nearby star system,” stated Herrera. “So yes, I’m inclined to think it’s debris (asteroid, comet or what have you) from another neighboring star system. That’s it.”

Meanwhile, Dimacali remains skeptical about ‘Oumuamua being an alien craft, but warned against dismissing the idea outright. “Keeping ourselves open to these possibilities keeps us on our toes in a good way; it opens us up to the wonders of the unexpected! But if nothing else, it helps us dream of the universe as it could be. ‘What if?’ has always been an invaluable question in scientific exploration.”

“Answers will come as we observe more objects, and put the pieces together,” concluded Dr Reyes.

“This is the adventure that is science.”