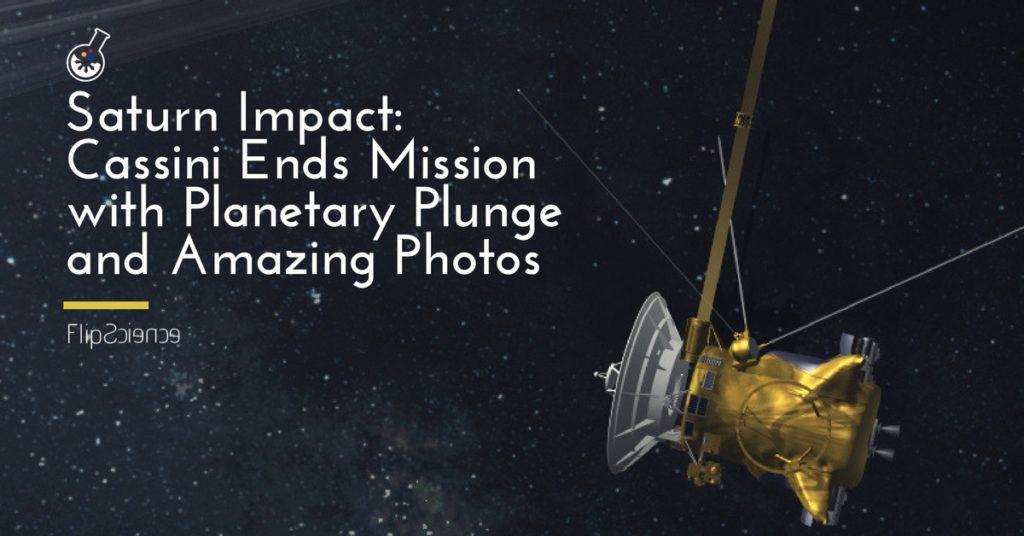 Concluding a mission that began on October 15, 1997, Cassini used the last of its fuel to plunge into Saturn’s thick atmosphere on September 15, 2017. Up to the very end, Cassini collected and transmitted data from Saturn’s upper atmosphere. Cassini’s signal stopped when friction from atmospheric entry and intense temperatures caused its antenna’s misalignment.

Along with the European probe Huygens, Cassini entered Saturn’s orbit on June 30, 2004. It was initially intended to span only 4 years. However, the mission was extended twice due to a number of vital discoveries, including:

* Indications of hydrothermal activity in the global ocean within its moon, Enceladus
* Liquid methane seas on another moon, Titan
* Swirling storms, a hexagonal jet stream, and other unique meteorological phenomena on Saturn’s surface
* A 2,000-kilometer-wide space between Saturn and its famous rings
* Other close-up photos of Saturn’s surface

Cassini’s nearly depleted fuel supply made its fall inevitable. Thus, the National Aeronautics and Space Administration (NASA) grabbed the chance to use it one last time for data-gathering purposes. Diverting the last of its fuel towards setting its course, the team decided to point it towards Saturn’s atmosphere to avoid contaminating Enceladus and Titan, which both have possibly habitable environments.

JPL research scientist Morgan Cable believes that Cassini’s end is certainly one for the books.

“This is a historic moment, and I think the mood reflects that. This is a celebration of an amazing mission and incredible legacy.”

“Incredible” is certainly an apt way to describe the legacy Cassini left behind, as evidenced by a newly released shot of Enceladus taken on March 29, 2017.

Taken from a distance of approximately 110,000 miles (180,000 km) away using Cassini’s narrow-angle camera, the image shows the icy, sun-illuminated surface of Enceladus, as the rest of its entirety reflects light from the planet it orbits. NASA officials confirmed that the image scale is 0.6 miles (1 km) per pixel.

Not shown in the photo are the geysers of water ice from the Saturnian moon’s south polar region. Discovered by Cassini in 2005, scientists believe that these plumes originate from a subsurface ocean of liquid water, opening up the possibility to a energy source that can support life.

“The sun-Enceladus-spacecraft (or phase) angle, at 141 degrees, is too low to make the moon’s famous plumes easily visible.”

You may view the rest of the photos in this set by checking out the album. — MF