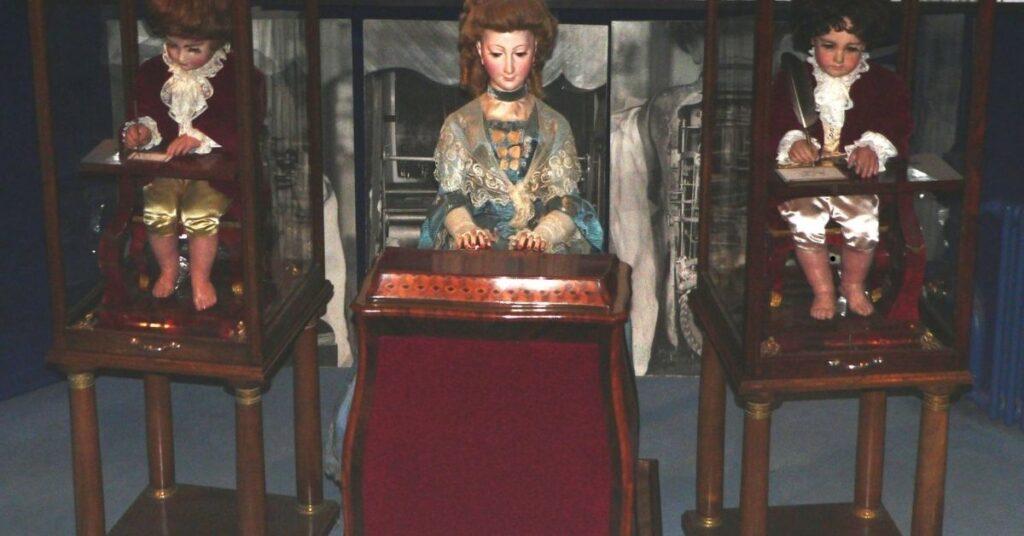 At the Musée d’Art et d’Histoire de Neuchâtel in Switzerland are three automated dolls built between 1768 and 1774. A collaborative project by watchmaker Pierre Jaquet-Droz, his son Henri-Louis, and his partner Jean-Frédéric Leschot, the so-called Jaquet-Droz automata were highly advanced for their time. In fact, many regard them as distant precursors of modern computers.

First is the Musician, a doll modeled after a female organist. She does not play recorded music; instead, Jaquet-Droz designed her to play a custom-built instrument by actually pressing its keys with her fingers. Additionally, her chest moves as if she were breathing, and she makes small movements like a real organist would (e.g., moving her head and eyes to follow her fingers).

Second is the Draughtsman, a young child that could draw four different images: a dog, Cupid on a chariot, a royal couple, and Louis XV’s portrait. The upper half of the Draughtsman’s body has three sets of cams that allow him to move his hand and draw with impressive accuracy. Also, he sometimes blows on his pencil to dust it off.

Last but not the least is the Writer, arguably the most impressive of the three. Wound up with a crank, the Writer possesses a system similar to the Draughtsman’s, enabling him to write up to 40 letters of text customized by the operator. This 6,000-part automaton uses a quill to write; occasionally, he dips it in ink. His eyes and head also make movements depending on what his hand is doing.

To this day, all three automata are reportedly in working condition.

Not exactly the kind of dolls you’d be happy to find in a dark, quiet room, are they?