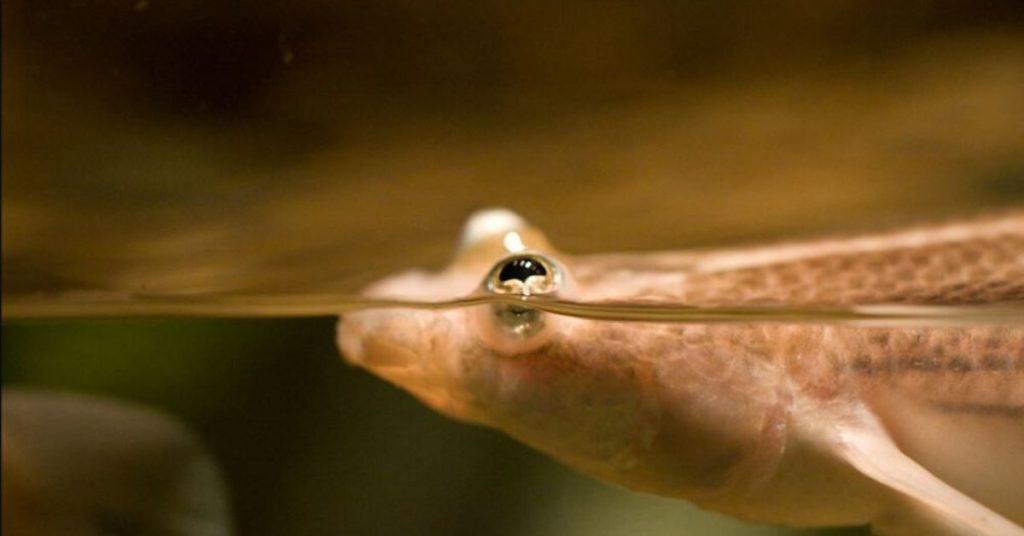 If you’re a diver or an underwater photographer, you’re likely familiar with Snell’s window. This causes a submerged viewer to see everything above the water through a cone of light roughly 96 degrees wide. When this happens, you’re not actually seeing out of the water: What you’re beholding is a reflection of the water’s surface, thanks to the way the light bends at certain angles. This physics phenomenon is cool if you want to take breathtaking shots underwater… and problematic if you’re a fish who just wants to hunt for tasty terrestrial insects without becoming some other animal’s chow. This likely explains why Anableps, a fish genus with three recognized species, evolved to give “four-eyed” a whole new meaning.

Anableps live along the Atlantic coast of Central and South America, in river estuaries and brackish mangrove swamps. “Four-eyed fish” is a bit of a misnomer, as Anableps don’t really have four eyeballs. What they do have is a pair of eyes high on their heads, both divided horizontally by thin tissue. Each eye has two pupils partially joined at the iris. This remarkable trait gives them the ability to see above and below the water’s surface simultaneously. The top half of each eye is designed to see in the air, while the lower half is fine-tuned for underwater vision. Hence, Anableps spend most of their time floating on the water’s surface, with only the lower half of each eye submerged.

Some Anableps have been observed to jump onto sandbanks to catch bugs. While they do seem to prefer insects, they also dine on smaller fishes and other invertebrates. Unsurprisingly, at least one species of Anableps, A. anableps, has demonstrated the ability to survive in the open air during low tides—literally a fish out of water.

In case the whole four-eyed deal hasn’t completely weirded you out yet: Anableps are livebearing fish, meaning females keep their eggs inside their body and eventually give birth to free-swimming juveniles. Interestingly, Anableps’ sex organs—an elongated fin called a gonopodium for males, and a genital opening for females—are located on only one side of their bodies. Which side? It varies from fish to fish. In other words, “lefty” males can only mate with “righty” females, and vice versa.