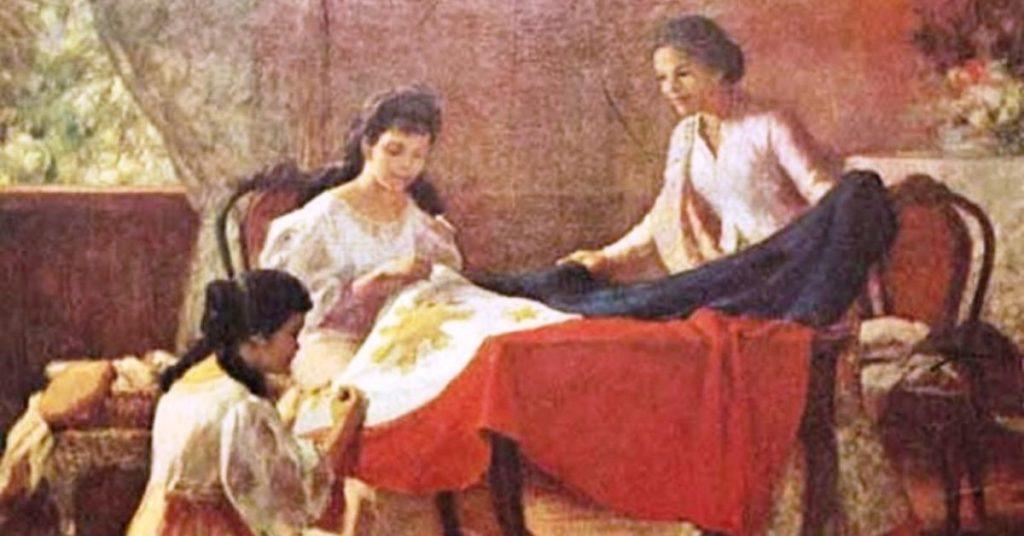 Fernando Amorsolo (“The Making of The Philippine Flag”)

Meticulously crafted in less than a week, the Philippine flag raised in Kawit, Cavite on June 12, 1898 was the work of Marcela Agoncillo, her five-year-old daughter Lorenza, and Delfina Herbosa Natividad (whose uncle was none other than Dr. Jose Rizal). At the time, Agoncillo and her family had already fled to Hong Kong to escape the Spaniards’ clutches. It was in their home at Morrison Hill Road where the three pairs of hands, aided with a sewing machine, completed the flag over the course of five days. Based on Agoncillo’s own description, the flag was “made from fine silk with a white triangle at the left containing a sunburst with eight rays at the center, a five-pointed star at each angle of the triangle, an upper stripe of dark blue and a lower stripe of red.” [A number of online sources attribute this to a Philippine Herald article published in October 1929.] Considering how important this symbol is to our history, it’s fascinating how much we still can’t say with certainty about it: what it was actually made of, its present whereabouts, and even the true shade of blue it sported.

In a few recorded exchanges, Gen. Emilio Aguinaldo himself claimed that the original flag was lost. In 1919, he lamented its loss in Nueva Vizcaya’s Caraballo mountains; six years later, he said it disappeared in Tayug, Pangasinan. Curiously, a damaged, battle-worn flag is currently on display at the Gen. Emilio Aguinaldo Museum in Baguio City—a flag that Aguinaldo’s descendants and the Emilio Aguinaldo Foundation claim to be the genuine article, not just a mere replica.

To support this assertion, the foundation invited a team from the National Historical Institute to inspect the flag under a low-intensity incandescent bulb. The experts conducted the test in February 1998, and found that the two-faced flag, which measures 184 cm x 97 cm, had been partially restored with nylon net. Additionally, an analysis of threads collected from the flag revealed that they were made of cotton, seemingly contradicting Agoncillo’s own claims. Ultimately, the team could not say for sure if it was the actual first flag, but nevertheless confirmed that it was, indeed, an authentic flag from that period in Philippine history.

Interestingly, one of the most hotly debated aspects of the flag is its precise shade of blue. A letter from Apolinario Mabini reportedly stated that the flag’s blue should be sky blue (“azul celeste”), while Agoncillo’s daughter (also named Marcela) attested that it was meant to feature navy blue (“azul marino”). Meanwhile, an 1898 letter from La Solidaridad co-founder Mariano Ponce included an illustration of the flag sporting a shade of blue somewhere in between (“azul oscuro”).

At this point, unless any new evidence turns up, these mysteries surrounding the Philippine flag may never be answered with finality. Still, while these questions matter from a historical perspective, it matters more that the average Filipino never forgets what the flag stands for: equality, peace, truth, justice, patriotism, valor, and perhaps most importantly, the will to fight for freedom.