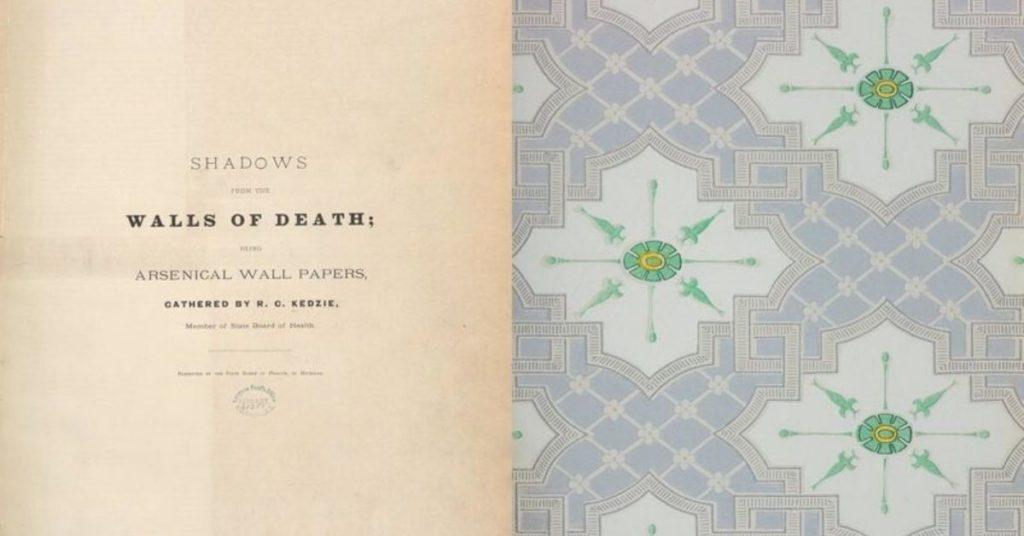 FlipFact of the Day: In the wrong hands, knowledge can be dangerous and even deadly. In extremely rare cases, though, the medium in which said knowledge is delivered can be fatal on its own. Such is the case with Shadows from the Walls of Death: Facts and Inferences Prefacing a Book of Specimens of Arsenical Wall Papers, a book that can quite literally kill you if you touch its pages without proper protection.

Published in 1874, Shadows from the Walls of Death measures 22 x 30 inches, and contains 86 pages of wallpaper samples with lethal traces of arsenic. It was an attempt by Dr. Robert M. Kedzie, a chemistry professor at Michigan State Agricultural College (now Michigan State University), to educate the public on the perils of using wallpaper with arsenic-laced pigments. At the time, nearly two-thirds of U.S. wallpaper contained the toxic element; manufacturers included it in their dyes to make the colors look brighter. While people were already aware of the dangers of ingesting arsenic, few knew that microscopic particles from the wallpaper could just as easily enter and harm the body as well.

A hundred copies were printed, which Kedzie sent to various institutions and libraries within the state. In its introductory pages, the book goes into detail about why it was made, and warns against letting children handle it. Despite these precautionary measures, at least one woman was reportedly poisoned after handling the book. Still, it accomplished its goal of raising awareness on why people should avoid arsenic-pigmented wallpaper.

Today, only four copies exist, distributed among four institutions: MSU, the University of Michigan, the Harvard University Medical School, and the National Library of Medicine (NLM).  The rest were destroyed by the libraries that housed them, unwilling to risk the safety of their patrons. The pages of the surviving copies are individually wrapped in plastic to prevent accidentally poisoning readers. The NLM’s History of Medicine division also scanned the book; anyone interested in safely viewing its contents could read and download it online. (This proved to be a challenging task, though, as the book had to be scanned by workers clad in safety gear “under laboratory conditions [and] under a fume hood.”)