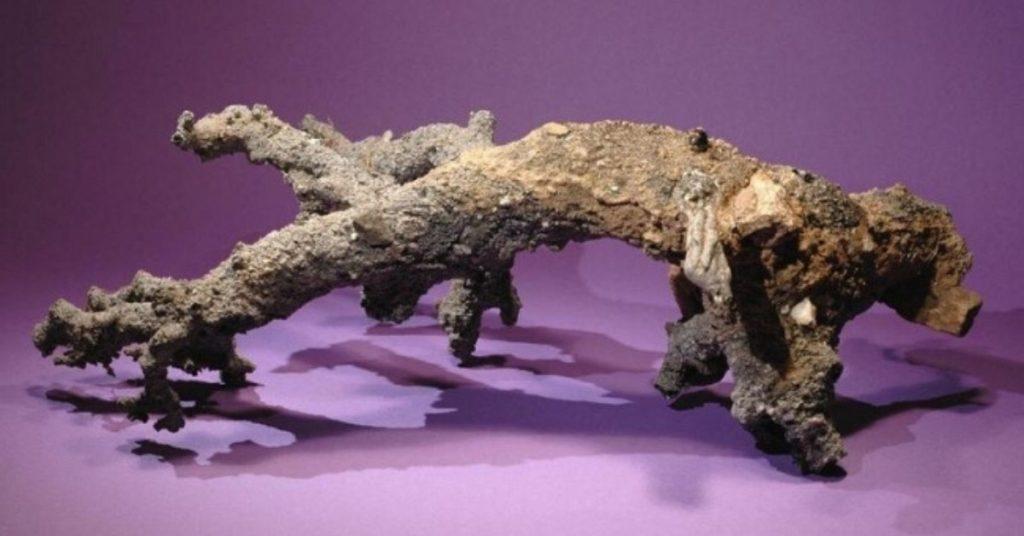 In 1812, the population of Drigg, a small village in England, uncovered a strange secret buried under the sand. They found three glassy tubes within close proximity of each other, stretching across several miles underground. The root-like formations followed their own paths, but appeared to have been from a single source: a lightning bolt that hit the sand, its extreme heat fusing the grains together. Such glassy structures are called fulgurites, a rare, remarkable, and rather revealing natural phenomenon.

Fulgurites take their name from the Latin word for lightning, “fulgur.” Typically fragile and hollow, fulgurites form when lightning strikes a silica-rich surface (especially when it’s damp). The sudden surge of heat from the bolt may cause sand, soil, rock, and other sediments to clump together, sometimes trapping gas bubbles as well.

There are generally two kinds of fulgurites. The more common sand fulgurites are usually cylindrical in shape, 10 ft (3 m) to 66 ft (20 m) in length, and at least 0.39 in (1 cm) in diameter. On the other hand, rock fulgurites are glassy coatings on rocks, and they typically form on mountain summits.

What we can learn from fulgurites

Interestingly, fulgurites can tell us a lot about the environmental conditions at the time of their formation.

A technique called thermoluminescence involves heating a crystal and gauging its glow, which indicates the number of electrons inside it. A brighter glow means more electrons, which in turn translates to more years. Through this method, scientists can determine the age of these “lightning fossils.”

A fulgurite discovered in the Sahara desert was revealed to be 15,000 years old. It contained atmospheric molecules and carbon from grass and shrubs, suggesting that the now-arid desert must have been wetter in the distant past.