FlipFact (May 5, 2020): The harlequin shrimp’s monotonous yet multicolored diet

Published on May 5, 2020 by Mikael Angelo Francisco 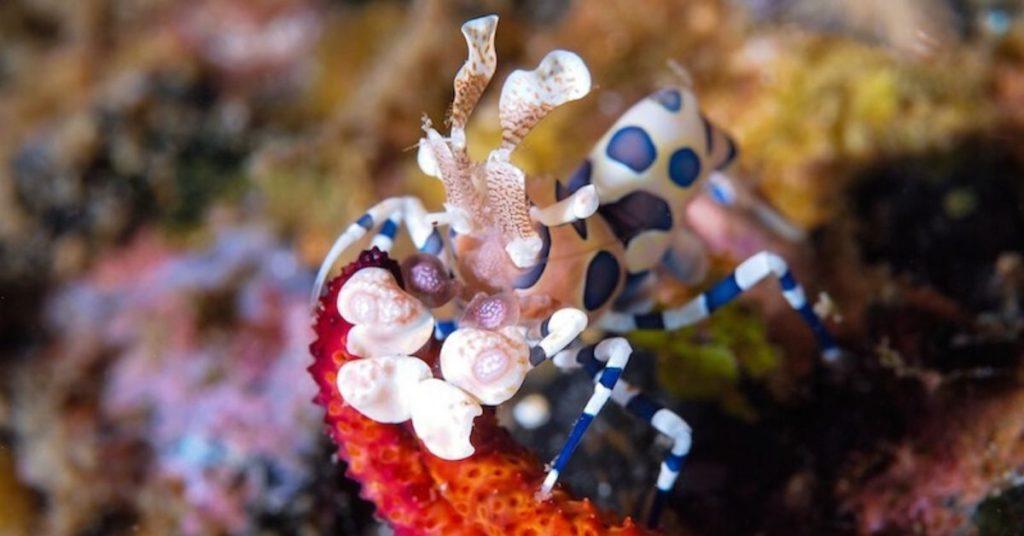 Due to its fascinating coloration, the harlequin shrimp (genus Hymenocera) is quite an attention-grabber. There are two visually distinct species under this genus. H. elegans has brownish spots, and is found in the Indian Ocean and the Red Sea. Meanwhile, H. picta has pinkish-purple spots, and is found in the Philippines and various areas of the central and east Pacific. Aside from its aesthetic appeal, though, one other thing makes the harlequin shrimp unique: its highly specific diet, composed almost entirely of sea stars (starfish).

Harlequin shrimp can be found living near or around coral reefs, growing up to 2 in (5 cm) in size. Despite its small size, the harlequin shrimp has few natural threats, as its colorful markings help it hide among the corals while giving potential predators the impression that it’s extremely toxic.

Harlequin shrimp get their nutritional needs almost entirely from sea stars (and sea urchins as well, but only in times of desperation). They’ve evolved to become effective hunters: Using the sensory antennules atop its head, a harlequin shrimp sniffs out its prey. When it finds the echinoderm, the shrimp crawls under it and uses gigantic flat claws to flip it over. The hapless sea star’s tube feet and soft tissues become a five-star meal for the tiny predator, which will consume it for days or weeks depending on the sea star’s size. In some cases, the shrimp even feeds its captive, keeping it alive for as long as possible to make it a long-term food source. Also, because of their dietary preferences, harlequin shrimp keep corals safe from parasitic starfish such as Asterina.

The fact that the harlequin shrimp is a picky eater makes it challenging to keep as a pet. Nevertheless, this colorful crustacean has no difficulty being the star of any aquarium.