How does the ‘immortal jellyfish’ outwit death? 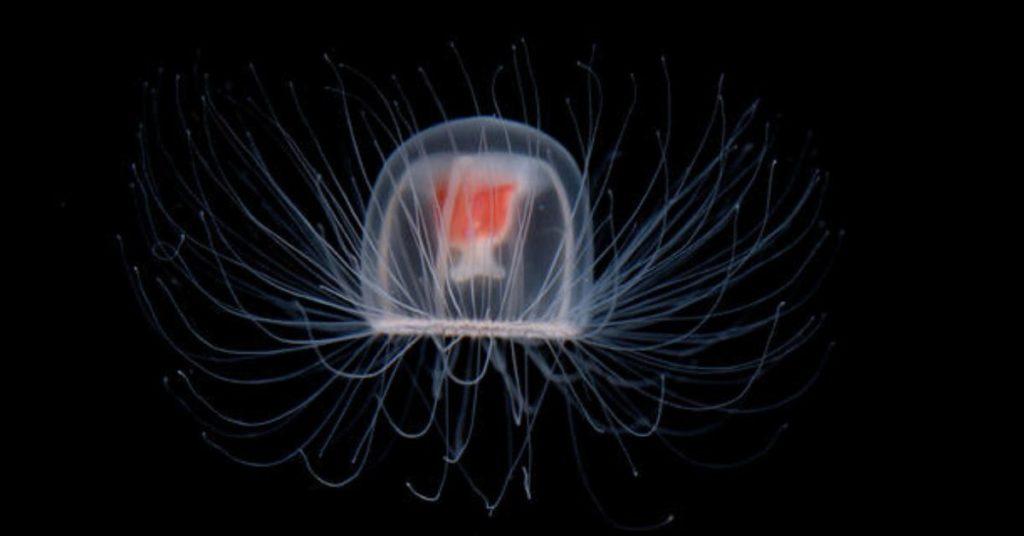 FlipFact of the Day: Nearing the end of its life, a lone sea jelly floats in the vastness of its marine habitat. The creature, no bigger than a fifth of an inch, is about to succumb to old age. For an animal with neither backbone nor brain, its life was arguably one that was well-lived, avoiding certain death in the jaws of a predator or at the jagged edges of a sea rock. At this moment, though, something peculiar happens. The sea jelly starts pulling all of its 90 white appendages into its transparent, red-bellied body. Eventually, the tiny, tentacled bag turns into a sinking egg. Settling gently on the sea floor, it completes its miraculous transformation from its full-grown medusa form back to its polyp stage—and now, Turritopsis dohrnii, the so-called “immortal jellyfish,” prepares for another shot at life.

First discovered in the Mediterranean Sea, T. dohrnii possesses what experts call “biological immortality.” When threatened with the prospect of dying from old age, disease, or severe physical trauma, T. dohrnii undergoes a unique cellular process called transdifferentiation. The immortal jellyfish’s specialized adult cells have the ability to turn into entirely different cells. This, in turn, allows the animal to revert to its larval stage (planula) instead of expiring. Upon landing on a rock, it develops into a cylindrical polyp colony, reaching maturity in mere weeks. The newly reborn sea jelly is genetically identical to its “predecessor,” but in a different form; it’s as if a bird could turn back into an egg and grow up in a different body.

Basically, while T. dohrnii can still die from violent causes, it can save itself from non-violent death by regenerating.

Still, it’s too early to tell if the immortal jellyfish can help us become immortal humans. Since these animals are notoriously hard to capture and maintain in a laboratory setting, information about their incredible transdifferentiative abilities remains scant. Nevertheless, that hasn’t stopped scientists from trying to unlock the secret to immortality in this itty-bitty invertebrate.