FlipFact (January 22, 2020): These are two different weevil species. Why do they look so alike? 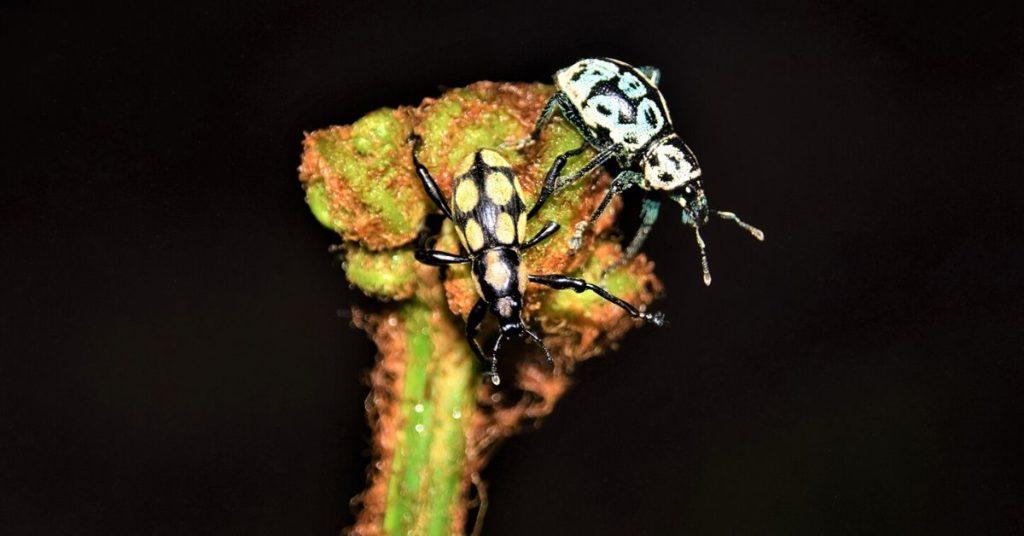 FlipFact of the Day: In the animal kingdom, hiding isn’t always the best option for survival. In fact, some species defend themselves by doing the exact opposite: They want predators to see them precisely so that they’d keep their distance. Pachyrhynchus reicherti, like other Pachyrhynchus weevils, has colorful elytra (the wing cases seen on various types of beetles, including weevils) that are fused and hardened. This defensive feature makes it pretty much inedible, meaning it’s not worth a hungry predator’s effort. Over time, predators learned to recognize the markings on P. reicherti‘s wings—a fact that other weevil species took advantage of.

Discovered in Mindanao in 2017, the jewel weevil Metapocyrtus willietorresi mimics P. reicherti‘s forewing pattern. It’s worth noting that both M. willietorresi and P. reicherti have tough elytra, which might lead you to wonder why the former even bothered to copy the latter in the first place. This is called Mullerian mimicry; in copying P. reicherti‘s elytra pattern, M. willietorresi dodges predators entirely, despite having the same type of built-in protection.

Interestingly, there’s a third mimic in this mix. Doliops daugavpilsi is a longhorn beetle that looks as tough as M. willietorresi and P. reicherti, but actually isn’t. That’s because unlike jewel beetles, longhorn beetles have soft shells. “There is another type [of mimicry] called Batesian mimicry, wherein the jewel weevils are being mimicked by longhorn beetles,” explains Dr. Analyn Cabras, the Filipina biologist who co-authored the paper in which M. willietorresi was described. In Batesian mimicry, a perfectly edible animal copies the look of a dangerous one, making predators stay away from it like the plague.