Published on May 14, 2020 by Mikael Angelo Francisco 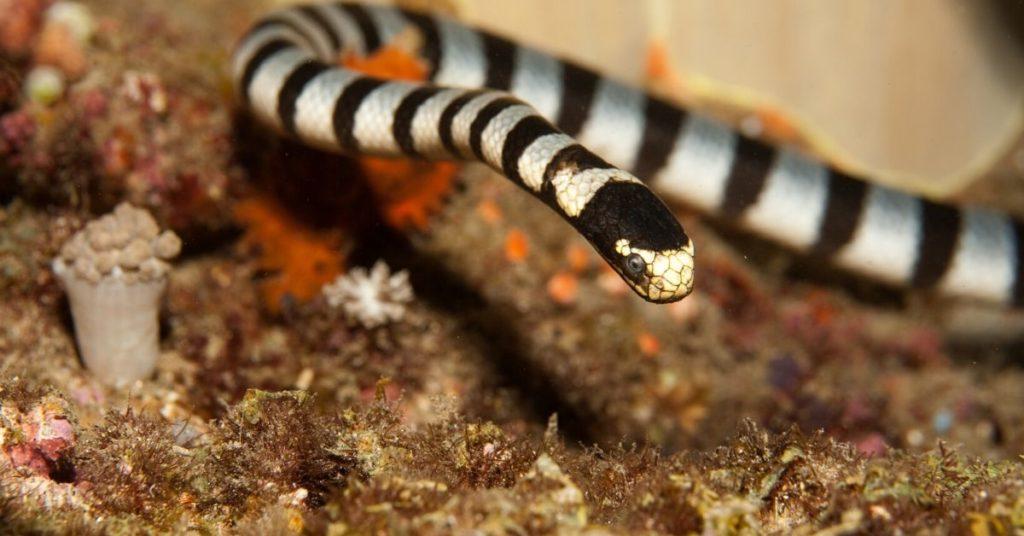 The yellow-lipped sea krait (Laticauda colubrina) goes by many names, including the banded sea krait, colubrine sea krait, or banded sea snake. Unlike most other sea snakes, this amphibious reptile spends more time on land than in water. It also prefers to be left alone. While it’s not known to be quick-tempered, it’s wise to steer clear of its path. That’s because a single bite from this snake is enough to kill you.

Named after the color of its snout, the yellow-lipped sea krait has alternating black stripes on its body, as well as a paddle-like tail for swimming. Females, which grow considerably larger than males, reach up to almost 5 feet long. It’s classified as an elapid, one of the many terrestrial and marine venomous snakes found only in tropical and subtropical locations. This species lives in different parts of southeast Asia, and is rather common in the Philippines. One can easily find it in Dumaguete, Palawan, Batangas, and other water-loving tourist attractions, slithering across beach sands, coral reefs, mangrove swamps, and even low-hanging trees.

Like sea turtles, the yellow-lipped sea krait is philopatric, meaning it will keep coming back to the same beach to rest and nest. This sea snake has learned to thrive in the ocean, yet still prefers land. It dives for about an hour to find food (usually eels and small fish) on reefs and shallow bottoms, after which it returns to the shore.

Sea kraits are generally docile creatures, biting only when they feel threatened. As they like being on land so much, it isn’t uncommon for sea kraits and humans to encounter each other. Still, that’s no reason to be complacent about being around them. They produce about 10 to 15 mg of a neurotoxic venom allegedly 10 times deadlier than a rattlesnake’s. Its victims experience convulsions, paralysis, and cardiac failure. While sea krait bite reports are rare, nearly all victims are fishermen who accidentally caught them and lifted them out.