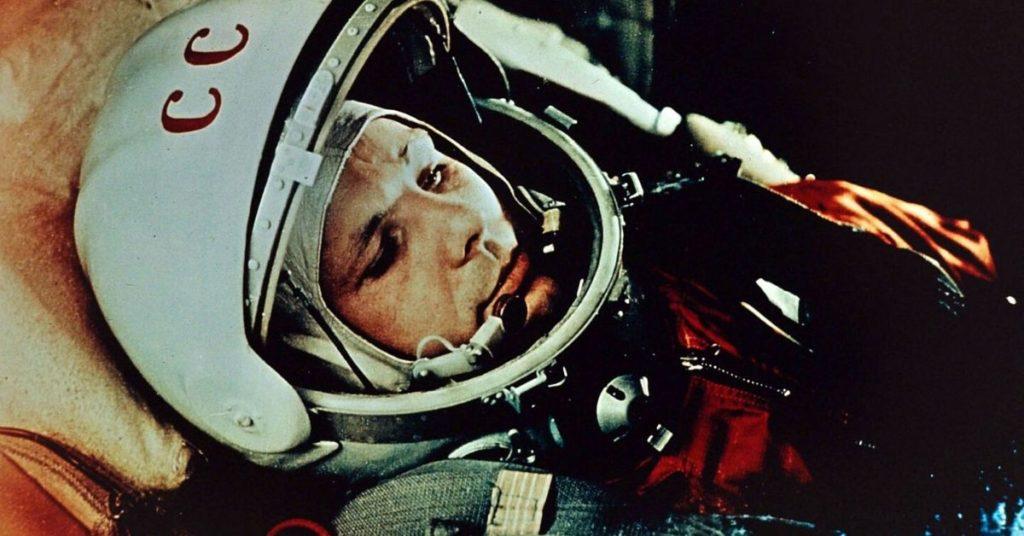 On April 12, 1961, a wide-eyed 27-year-old sat inside the cramped cockpit of Vostok 1, wearing an orange spacesuit and a white helmet with red letters painted over it. It was a moment he had spent a year preparing for, after besting 19 other hopefuls. On the cusp of making history, Yuri Alekseyevich Gagarin, the first human being to travel into space, kicked off the most significant 1 hour and 48 minutes of his life with a single word: “Poyehali!” (“Let’s go!”)

Gagarin was born on March 9, 1934 in Klushino, a village in Smolensk Oblast, Russia. The child of a carpenter and a farmer, he was initially groomed for a lifetime of metalworking. His life changed, however, when he joined his technical high school’s aeronautics club and fell in love with flying. Thus, in 1955, he began his flight training at the Orenburg Military Pilot’s School, where he also met his future wife, Valentina.

After finishing his studies, he was assigned to an airbase in Murmansk Oblast, where he quickly rose through the ranks. His reputation and natural aptitude for flying earned him a spot in the Soviet Union’s secret space training program. Gagarin would prove to be a cut above the rest, eventually becoming one of the “Vanguard Six ,” from which the Vostok program’s first cosmonauts were chosen.

Ultimately, when the time came to pick the man for Vostok 1’s pioneering flight, it was both Gagarin’s skill and his rather small stature that gave him the edge he needed. He was only 1.57 m (5’2″) tall, perfect for Vostok 1’s small cockpit. Thus, the Soviet Union chose him to be their figurehead in its race to beat the United States to space.

After his historic 108-minute flight around Earth, Gagarin returned safely, and instantly skyrocketing to fame as both a space hero and a testament to Soviet superiority. However, the strain of being the living, breathing symbol of the Soviet ideal—and all the begging letters from ordinary folk that showed him how life under the Soviet Union was less than ideal—took a toll on his psyche.

Gagarin was consumed by vices and almost fell completely from grace, his downward spiral only halted by the accidental death of his friend. This served as a wake-up call for Gagarin, and by 1968, he was eager to show the world that he was ready to fly again. Meanwhile, Soviet authorities did their best to keep him grounded, for fear that they would lose their space hero in a freak accident.

Sadly, Gagarin’s story came to a tragic end on March 27, 1968, when a routine training flight from Chkalovsky Air Base ended in a fiery crash. As the country mourned his passing, Soviet officials investigated the incident, but gave the public no concrete details about the ill-fated flight. Gagarin’s remains were placed in the Kremlin Wall Necropolis.

In 2013—45 years after Gagarin’s death—cosmonaut Alexey Leonov, who led a parachute training session at the airbase that day, revealed that a larger aircraft had violated Gagarin’s plane’s airspace, inadvertently causing the accident. However, doubts still persist regarding this being the true reason for Gagarin’s crash.

Since 2011, the world has been celebrating April 12 as the International Day of Human Space Flight, also known as Yuri’s Night. It’s a fitting tribute to the first true champion of the space race.