Published on November 27, 2019 by Ingrid Espinosa 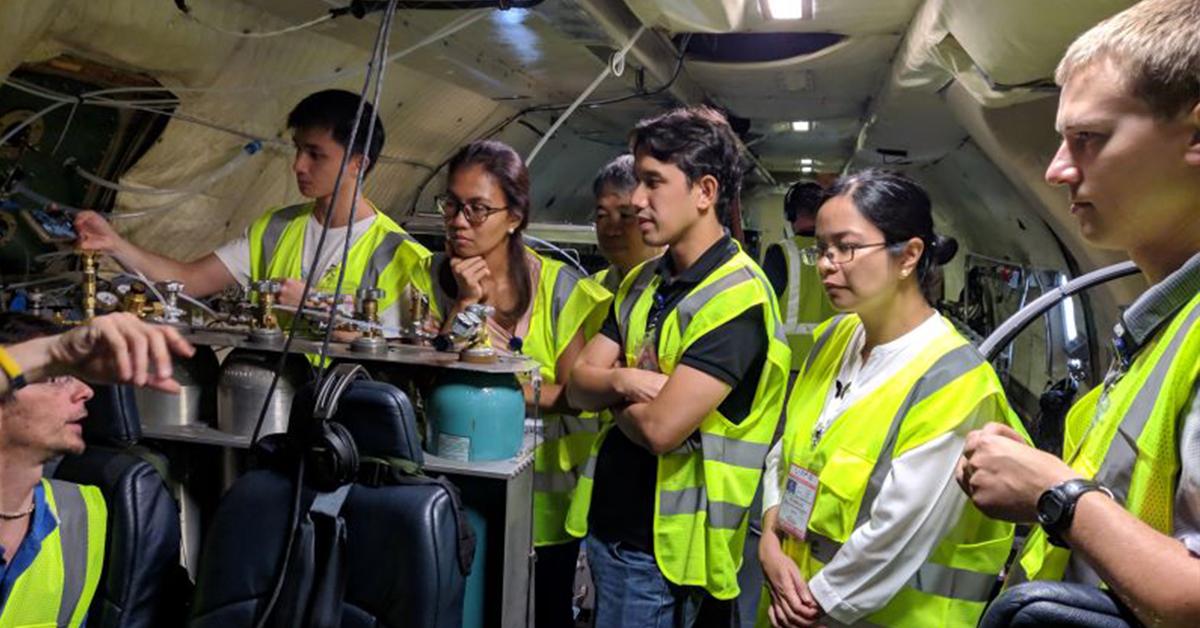 Floodlights illuminate the light fog and wispy clouds at 4 AM, above Pampanga’s Clark International Airport.

A young woman in a bright yellow vest and blue gloves climbs a tall ladder propped beside the P-3B aircraft. The P-3B is a little smaller than the usual passenger airplanes, with other key differences: On its wings are four propellers, and its tail bears the NASA logo. She inspects and cleans the foot-long, bullet-shaped instrument jutting out the side of the aircraft. The plane’s prepped and ready to fly; in an hour’s time, the P-3B will be up in the air and among the clouds, literally. They’d received the go signal to fly just hours earlier, and they made sure that all systems were running smoothly for the flight. After all, it’s one of the last times this plane would fly from this runway. 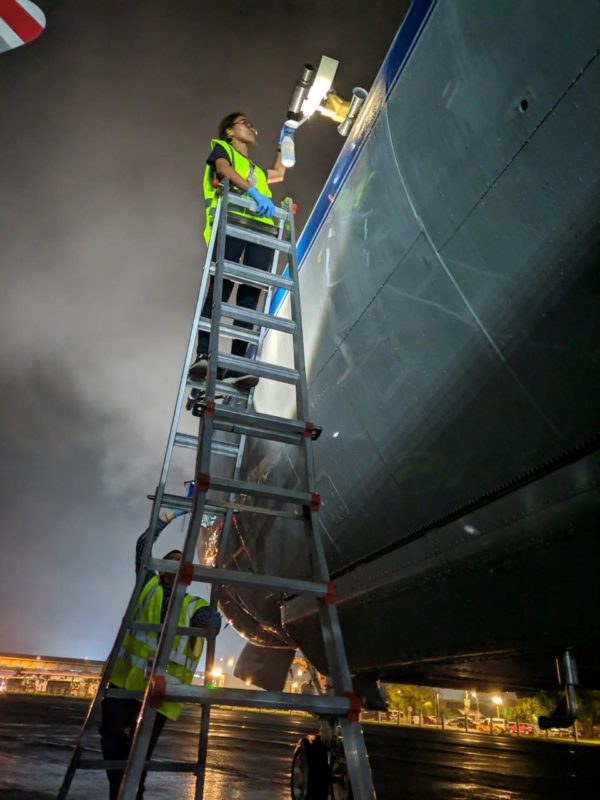 This year, scientists from the United States’ NASA and Naval Research Laboratory, the Philippines’ Manila Observatory and PAGASA, and other countries worldwide came together to work on CAMP2Ex (pronounced “campex”). It was a first-of-its-kind international collaboration on climate studies and data in Southeast Asia that took flight in August and September 2019.

Though it certainly looks and feels like a grand collaboration now, CAMP2Ex (which stands for “Cloud, Aerosol and Monsoon Processes Philippines Experiment”) started very simply, and very small.

In 2008, farmers in Mindanao complained that rainfall patterns were changing and affecting their harvest. The Manila Observatory, being one of the Philippines’ leading institutions in atmospheric science, took notice. At the time, NASA and NRL also had small projects in the region.

Soon, what started as an informal study group meeting yearly became a little more each time, trying to unravel the mysteries of rainfall pattern and cloud physics to help farmers adapt to changes and have goods to send to the market, and in improving climate models in general. Until one day, it became something much more, and CAMP2Ex was born.

The decision was supposedly made when there was enough information to formally commit resources to. (NASA’s Dr Hal Maring and the NRL’s Dr Jeffrey Reid even joked that it was about time they stopped working on this growing side project for free.)

In the smaller, earlier projects, boats took weather measurements along the seas. But the scientists knew something was still missing. NASA satellites became the go-to sources for climate data, but they were not designed for short-term weather measurements. The data had to be triangulated. They needed local data to complete the picture.

And there lay the answer–underneath the clouds.

Cloudy with a chance of data

As early as grade school, students in the Philippines learn that the country occupies a unique geographical position. It faces a threefold threat: It’s on the path of volcanoes, tsunamis, and intense weather from being in the tropical cyclone belt.

Even just taking the third threat of weather, the Philippines is still in a unique, albeit somewhat unenviable, position. Apart from being on the path of tropical cyclones coming in from the Pacific, it is also on the end of the monsoon and cyclone belt, and on the boundary of polluted air masses in the continent.

The Philippines receives typhoons from the east, heavy rains and wind from the northeast, and polluted air from the south. In other words, it is on the frontline of extreme weather events. This often makes it a site of disasters and a receptacle of manmade pollutants–but also of opportunity.

Specifically, the perfect opportunity for studying the interaction of clouds, weather, and the environment.

On paper, CAMP2Ex is a study to describe how the raindrops mixed with manmade and natural particles affect how much and how often it rains in the Philippines. In doing so, it connects scientists from different disciplines and collects cloud data from all over the Philippines, in efforts to better understand cloud physics, create better rainfall models for the Philippines, and validate data underpinning climate models that span the entire globe. NASA in particular is interested in cloud microphysics, influence on radiation (heating), and cloud meteorology (the interaction of clouds and other aerosols).

In a way, the scientists were cloudhunters. Clouds are aerosols: liquid droplets mixed with chemicals and/or solid particles. Clouds may look like white smoke or gas, but clouds are liquid, hanging in the air by holding on to other things to keep it afloat. Pure water vapor, or gaseous water, is invisible. 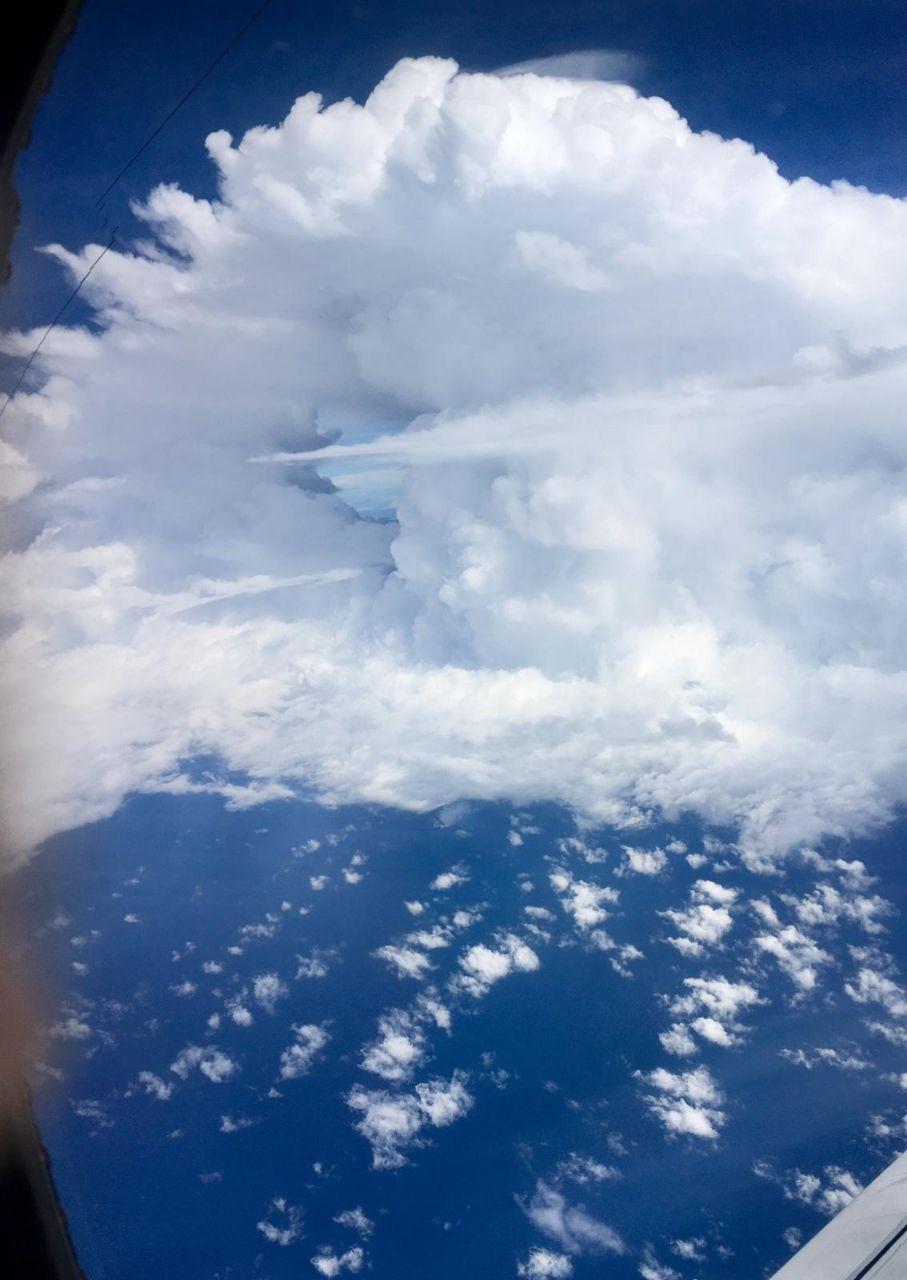 Cumulus and cumulus congestus clouds are the team’s favorite clouds to get close to: flat-bottomed, fluffy, occasionally towering in height and stacking several storeys high. Still, as a member of the team emphasized: “Every cloud is important.”

On the P-3B and the smaller but speedier LearJet, pilots and scientists zipped through clouds hours at a time, taking measurements and samples along the way. The teams clocked in 140 flight hours on the P-3B , and 40 hours on the leaner Learjet in only two months. Onboard, 12 advanced instruments (or more, depending on how you count) took measurements and actual cloud droplet samples from the air, in vials. Space scientists also employ similar instruments.

“[Passenger] Airplane turbulence is mellow, compared to this,” said one of the scientists leading the teams, who operated the complex instrumentation on the P-3B and Learjet planes. With updraft speeds of over 21 meters per second, the scientist described it as “the closest you could get to spaceflight,” positive G, weightlessness, and all. “It’s like riding a rollercoaster that makes you weightless.”

If so, it was the most tiring rollercoaster any of the scientists had ever ridden. To make the most of each takeoff, the P-3B cruised for 8-10 hours straight each time, and the smaller Learjet zipped in 3-hour bursts. Even then, the teams didn’t know if they were flying that day until just a few hours before. Forecasters give the signal at about 2 to 4 AM, and the planes would be set to fly anytime between 5 to 8 AM. 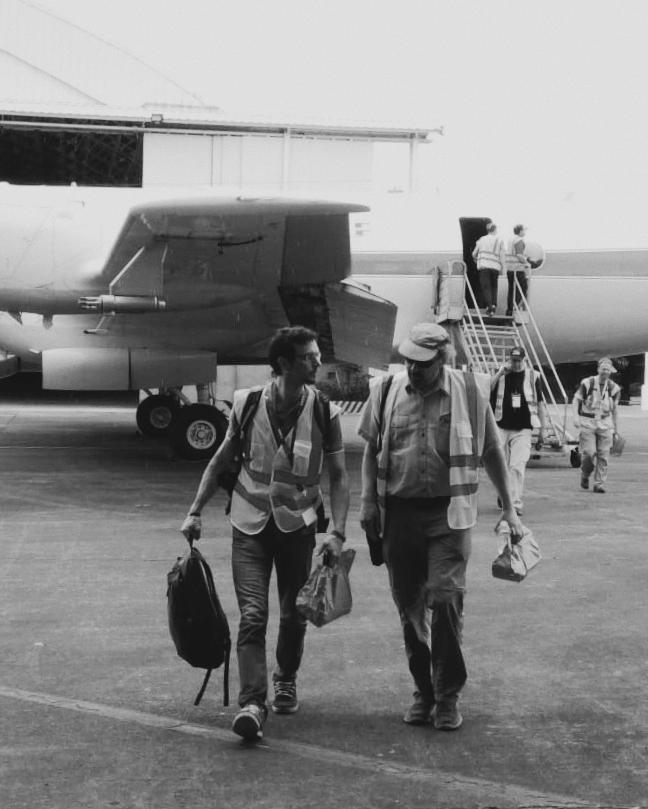 Clearly, forecasting was crucial. The forecasts decided whether the planes could take off for the day or not. Weather forecasting was one of the main collaborative tasks between the U.S. scientists and the younger Filipino researchers. They expected the students to take time to understand the rhythm of the predictions, gradually learning to use the instruments and perform calculations. By the second day, the students were able to give predictions that the rest of the team anticipated, and to which they’d rush in the early morning.

Weather prediction in itself is already complicated. The Philippines’ wildly varying geography of islands and mountains adds to an already long equation. But to say weather prediction was their only task as forecasters would be inaccurate. The real challenge was to “have the bottom line up front.”

The forecasters had to look at the data, see the message, and communicate it clearly to the pilots and scientists so they could make a decision to fly or ground the plane another day. And of course, every day was crucial for a campaign that could only last two months.

For the young scientists and students who joined the campaign, it was a rollercoaster of learning as well.

Julie Mae Dado, one of the younger scientists involved, just got her PhD and deals in climate modelling. On most days, she does her work at a desk computer. This time, however, she got to join the team up in the air and get her “fieldwork [done] in the clouds.”

Aside from all the technical notes, it was also a crash course in teamwork and collaboration. In real time, the scientists in the air would send notes to scientists on the ground. They did this while coordinating with the pilots to implement careful decisions literally made “on the fly.” 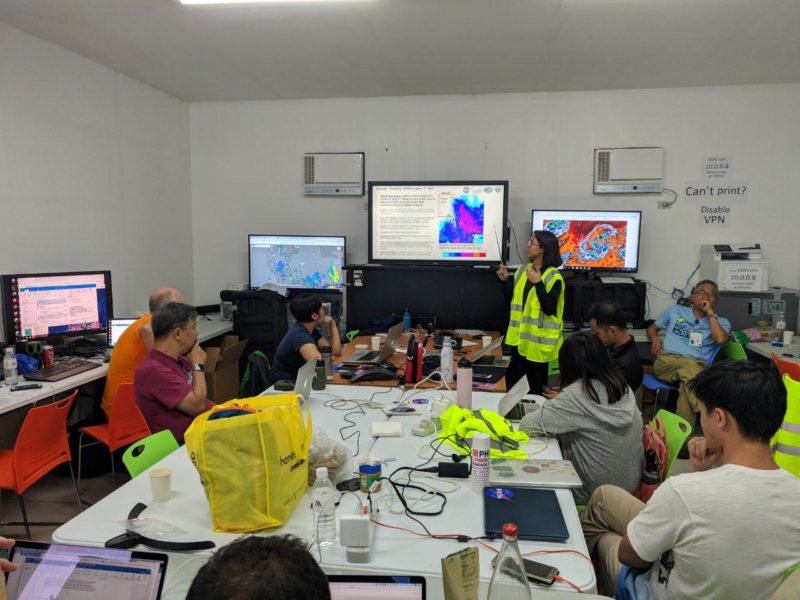 Still, it wasn’t all thrills on the planes. Eight hours is a long time in the air, especially when the only electronics are the instruments. That means no Netflix or social media on board. During lull times, when there were fewer clouds to “hunt”, some team members would take turns napping, or pass around jokes and cookies. During the most exciting of times, things would lean more toward organized chaos: People on board taking turns speaking, deciding, and calling for (and paying) attention.

At the heart of it, Simone Tanelli, one of the lead scientists, had one piece of advice to get through those grueling flights: “Have fun.”

For Simone, the long hours were a challenge well worth taking. “You need to keep yourself completely excited about what you’re doing. Everyday, there was something exciting out there. I wish I could be in two places at the same time. There’s always something.” One could almost see the sparkle in his eyes as he spoke. 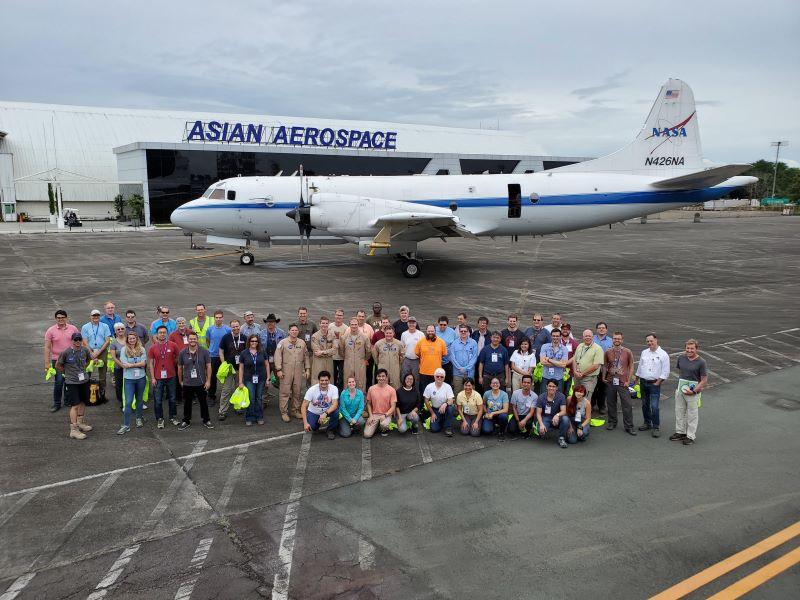 Upon reaching the ground, the researchers analyzed the cloud samples a multitude of ways in the lab. The scientists looked at everything about them: size, the presence of crystals or ice, their chemical composition, how they interacted with heat, even their efficiency at making rain.

For the duration of those two months, the teams carried out the routines of forecasting, flight, and instrumentation, all carefully done to maximize the amount of data they could collect in their short time in the Philippine skies. And maximize it they did: They collected data that would take two to five years to analyze completely. The preciously vast data will be available to international and local researchers alike. At various press conferences, the scientists made it clear that they did all their homework and already had a inkling of the story the data would tell. Yet, they still seemed as excited as kids to tease it out from the murmurs of the clouds themselves. 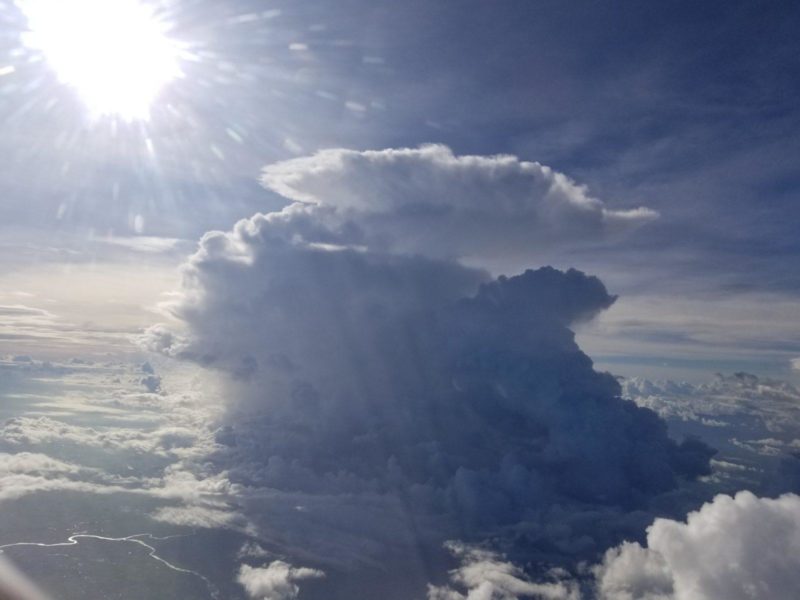 CAMP2Ex’s quick flight through Philippine skies may have concluded, but the journey is far from over. Apart from the ongoing shared data analysis, mentorships between junior and senior scientists have been made, and partnerships have been formed as well between the U.S. and the Philippines in continuing the shared research. As the scientists who have been around since the beginning and those who rode the planes can probably attest, time goes by faster than we notice. At the same time, the shifting clouds will likely move faster than we expect them—and reveal the stories and predictions kept within. —MF

Ingrid is currently working in public health research but has also dipped her toes in various fields. She loves the intersection of science and art, and wishes to share her excitement at discovery and curiosity through writing, in the hopes everyone will share appreciation of these as well.