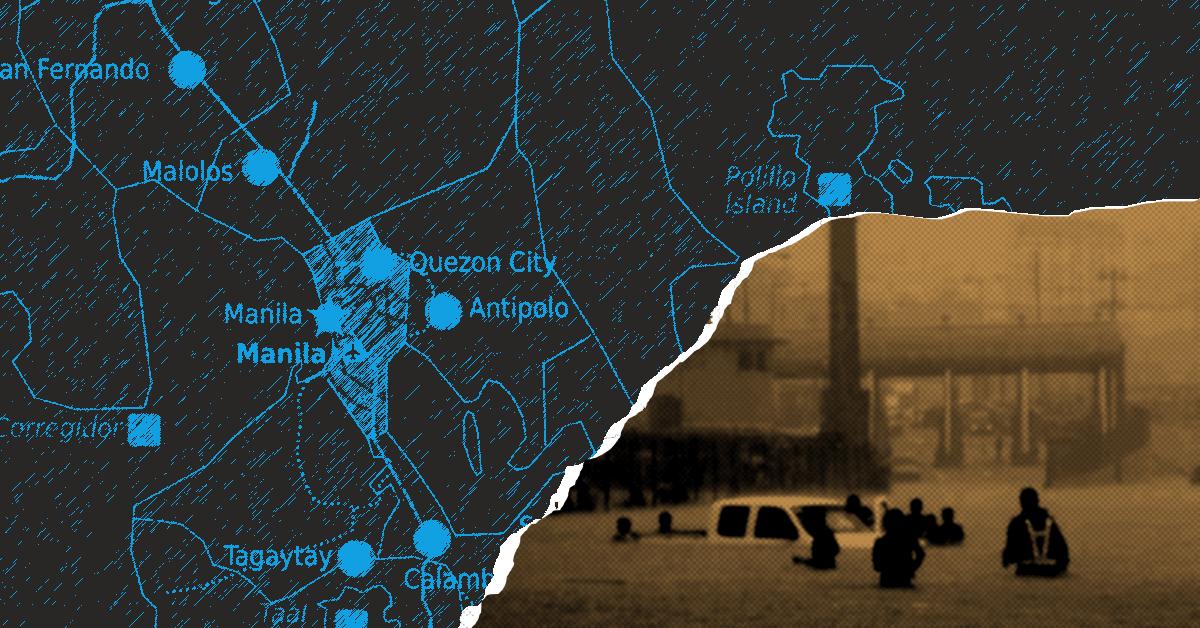 A Filipino atmospheric scientist wanted to see what over a century’s worth of climate data could say about Metro Manila. Based on the results, it’s time for us to listen.

One hundred years ago, in August 1919, relentless rain barraged the streets of Manila.

The amount of rainfall was, in a word, astounding. It was so copious, in fact, that it rendered the crown jewel of the Spanish colony without bright sunshine for 18 days.

Records indicate that this prolonged rainfall exceeded previously registered precipitation numbers. There were also reports of extended periods of “very remarkable” flooding in Manila and nearby provinces, though data on the actual height of the flooding is either extremely scarce or nonexistent.

In his 1928 account of this then-unprecedented phenomenon, Fr. Miguel Selga, S.J. attributed the nearly three weeks’ worth of dark days in Manila to eight typhoons existing near the Philippine region, five of which tracked along Luzon’s northeastern region and only one of which actually passed through Manila. He wrote:

“[I]n August 1919, no less than eight typhoons affected the normal conditions of the Archipelago giving rise to protracted rains, extraordinary floods and heavy cloudiness[…] almost two-thirds of a month was sunless.”

At the time, the Spanish-born Fr. Selga was the director of the Weather Bureau, the Philippines’ weather agency during the American occupation. The bureau produced a series of bulletins that contained Metro Manila data from 1901 to around 1940. When atmospheric scientist Dr. Gerry Bagtasa came across these bulletins, they piqued his curiosity.

“I thought it would be interesting to see changes, if any, in the climate of Metro Manila,” explained Bagtasa, an associate professor at the University of the Philippines Diliman’s Institute of Environmental Science and Meteorology (UP IESM).

And for the National Capital Region—which has a population of around 12.9 million—118 years’ worth of climate data is quite telling.

Many non-scientists (even world leaders, including United States president Donald Trump) tend to confuse weather with climate, often referencing anecdotal experiences regarding the former to refute evidence about disturbing trends in the latter. Thus, when discussing meteorological matters, it’s important to understand the distinction between the two.

In a nutshell, weather refers to short-term atmospheric changes. Within this context, one can talk about a delightfully sunny afternoon, for instance, or a storm lasting several days. Climate, on the other hand, is the “average weather,” in a sense—the statistical description of temperature, humidity, precipitation, wind, and other relevant variables in a given region, averaged over an extended period of time. Naturally, different regions can have different climates.

According to the World Meteorological Organization (WMO), the “classical” period of measuring climate spans 30 years. Bagtasa’s study, which was recently published in the International Journal of Climatology, examines available data from 1901 to 2018—nearly four times that period.

“I met researchers from Japan who are actively searching for data in different libraries all over the world,” said Bagtasa. “I think they also found data during the Japanese occupation, as well as data from the establishment of the Manila Observatory in 1865 until the end of the Spanish colonization.”

BA Racoma, a PhD student of meteorology at UP IESM and the University of Reading in the United Kingdom who was not involved in the study, opined that in climate change discussions, factoring in a century’s worth of observations is beneficial.

As Racoma, who focuses more on studying extreme weather events than climate science as a whole, succinctly put: “When talking about long-term trends, more data is a good thing.”

Bagtasa highlighted a number of key takeaways from his extensive analysis of Metro Manila’s climate data.

For starters, the study revealed an increase in total annual rainfall; Bagtasa attributed this mainly to extreme events, particularly tropical cyclones. He found that rain induced by tropical cyclones contributed close to half (45.2%) of Metro Manila’s mean total rainfall.

“In a way, yes, the result was a bit expected,” Bagtasa shared. “I have another study that showed the number of days along western Luzon when the Habagat flow is enhanced by a distant tropical cyclone, producing heavy rainfall events, had been increasing in the past 60 years. So I thought that that would also affect Metro Manila.”

In the study, which Bagtasa submitted for publication last April, he also warned of a possible rise in dengue cases in Metro Manila. He cited research from 2008 that established a significant correlation between rainfall and previous dengue outbreaks in the region. However, he also clarified that other important factors, such as sanitation and population exposure, play a role in compounding the dengue problem.

Last August, the Department of Health (DOH) declared a nationwide dengue epidemic. To date, Metro Manila ranks third among the regions, both in number of dengue cases (23,251) and fatalities (122).

Part of this is due to a phenomenon called the urban heat island (UHI) effect. Large cities tend to grow warmer with the construction of more roads and buildings. This is due to the use of impervious, heat-absorbing materials such as asphalt and concrete.

Studies over the last few years reveal an increase in Metro Manila temperature, influenced by urbanization. Alongside greenhouse gas emissions, UHI adds to why Metro Manila nights are literally getting hotter. However, we need more data from outside the urban region to gauge exactly how much it contributes.

Interestingly enough, Bagtasa’s research also showed that nighttime temperatures stopped increasing around the year 2000, seemingly tempered by the cooling effect of increasing rainfall. At first glance, this may not necessarily seem like a bad thing. However, it may actually be indicative of a problem that is right under our noses, in more ways than one.

Last March, Greenpeace’s 2018 World Air Quality Report ranked 11 cities in the Philippines among the 15 cities in Southeast Asia with the cleanest air. Out of those 11 cities, six—Valenzuela, Parañaque, Makati, Manila, Mandaluyong, and Las Piñas—are in Metro Manila. Numerous media outlets initially took this as a good sign. Unfortunately, it also points to a gap in our knowledge of how polluted our air truly is.

According to Bagtasa, limited literature exists on the air quality of Metro Manila. Furthermore, what’s there doesn’t exactly have promising things to say. “One of the key pollutants we have is black carbon or soot, which are mainly the black smoke we see from jeepneys and buses,” Bagtasa elaborated. He added that black carbon isn’t in current regulatory measurements, is observed mainly for research purposes, and can be “quite difficult to measure.”

The location of air samplers can significantly influence the accuracy of measuring pollution. Thus, reports showing clean air in Metro Manila may actually be based on limited data, non-standard measurements, or even non-uniformly distributed air samplers.

A future flooded with problems?

Bagtasa warned that Metro Manila may face increasingly severe problems in the future because of these issues. Worse, a good number of them aren’t even directly about the weather. “I think flooding will be the main issue of NCR. This may then lead to other non-weather related problems like sanitation, diseases, (worse) traffic, etc.”

Bagtasa recommended keeping waterways clean, noting that garbage still clogs many small creeks. He added that the region may eventually need another waterway in addition to the Pasig River. He also emphasized the importance of river monitoring, as well as the compulsory evacuation of residents along river banks and flood-prone areas. “Metro Manila is naturally the outlet of water falling into Sierra Madre to the east; too much build-up without this in mind will be (and have been) detrimental to us.”

Bagtasa also mentioned that ordinary citizens should observe proper waste disposal and help maintain the esteros the Spanish built for better drainage. “I think these are simple things people should do, then engineering interventions eventually by the government.”

“As disaster risk is a function of exposure (population), vulnerability (circumstances of a community), and hazard (climate change and extreme events), I do agree with the recommendations of the paper that the changes in temperature and precipitation of Metro Manila be taken into consideration and should be addressed immediately,” said Racoma.

Unsurprisingly, dealing with such a large dataset comes with potential challenges. These include incomplete data, changes in measuring instruments or weather observers, or even the impacts of extreme weather events. However, Racoma observed that due to the length of time the study covers, the trends are still apparent, despite the extreme events. He also noted that the study addressed the other challenges by homogenizing the dataset.

According to the WMO, climate data homogenization means “to adjust climate records, if necessary, to remove non-climatic factors so that the temporal variations in the adjusted data reflect only the variations due to climate processes.”

“The Spanish did many weather-related measurements that we can use to understand what’s happening on the microclimate level,” said Bagtasa, suggesting that a similar method of climate analysis be applied by scientists in other regions as well.

“Future climate changes will not be uniformly distributed; hence, it’s important to know how the climate of a certain location behaves with large-scale climatic changes.”

Studying a century’s worth of regional climate records can be a daunting, even maddening task, especially for one person. It’s important, though, because studying the “whats,” “whens,” and “wheres” of the past can help us answer the “whys” of the present—and prepare for the “hows” and “what ifs” of the future.

It’s a lesson best summed up by Bagtasa’s thoughts on current cleanup initiatives in the metropolis:

“I think these are things that must be sustained, and not forgotten in the collective memory of the people.”