Pawikan Patrol: A Pinoy-made card game hatched along the seashore 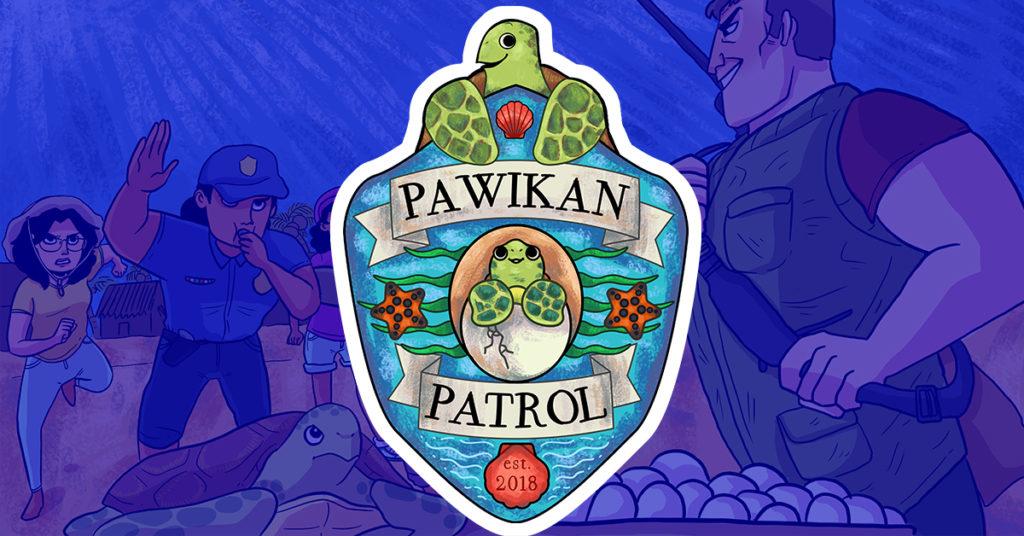 Two years ago, in April 2018, an idea hatched on a sandy shore in Morong, Bataan.

“A thought occurred to me while I was walking along the beach at almost high noon, with a sack filled with trash I picked up along the way in tow,” recounted environmentalist Mykey Cuento. At the time, Mykey was teaching grade school students about environmental conservation, and wanted to add a dash of fun and competitiveness to his lesson plan.

In his spare time, Mykey organized sea turtle conservation trips in Bataan and La Union, participated in coastal cleanup intiatives and education seminars, and even lent a hand during night patrols and turtle hatchling release events. Looking back, it’s no surprise that he ended up designing Pawikan Patrol, a card game revolving around saving sea turtles.

The way the concept formed in his head, though, seemed straight out of a fever dream. Mykey imagined the shoreline forming itself into a column of face-down cards that turned face-up one by one—”It might have been due to dehydration, fatigue, or both,” he quipped—to reveal different creatures and objects: turtle eggs, ghost crabs, and even garbage.

“And that’s basically how the core mechanics for the game were conceived: a simulation that allows players to experience the actual work that pawikan patrollers do.”

Of turtles and teamwork 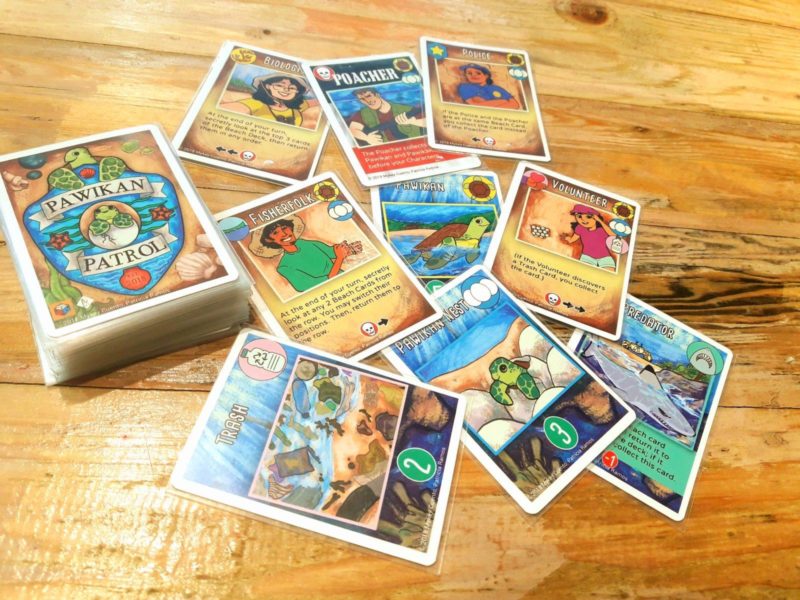 Pawikan Patrol is simple enough to learn within 5 minutes. Players may play as a Biologist, Fisherfolk, Police, or Volunteer. They must work together to thwart the Poacher, a non-playable antagonist who moves based on the players’ actions.

“While there’s a whole of luck involved in the opening round of the game, it’s how players decide on what to do [in that round] that can dictate the pace for the rest of the game,” Mykey shared. “From the second round onward, it becomes a matter of skill, emphasizing the use of deduction and memory to help you make an informed choice—again, just like how real-life pawikan patrollers do it!”

The player with the most points by the end wins. However, if you and your fellow players refuse to cooperate with one another, you can all lose. And according to Mykey, it might take more than a couple of tries before anyone could actually start winning.

“It’s what we call in game design parlance as ‘semi-cooperative,’ meaning only one player can win, but the possibility of everyone losing and starting over exists,” explained Mykey. This prompts players to work together towards achieving victory, rather than adopting a “to each their own” attitude. And while you can play the game solo, it’s arguably more exciting when you’re playing with friends.

Creating Pawikan Patrol involved quite a bit of teamwork, too. Mykey took the lead in developing the game mechanics, prototyping, and testing the game’s playability. Meanwhile, two other creatives worked on the card art and the manual, respectively. “The beautiful images on the cards as well as the box were created by the talented Patricia Ramos, a children’s storybook and comics writer and illustrator,” explained Mykey. “For the game manual, I got some help from Jam Tolentino, another up-and-coming game designer.” 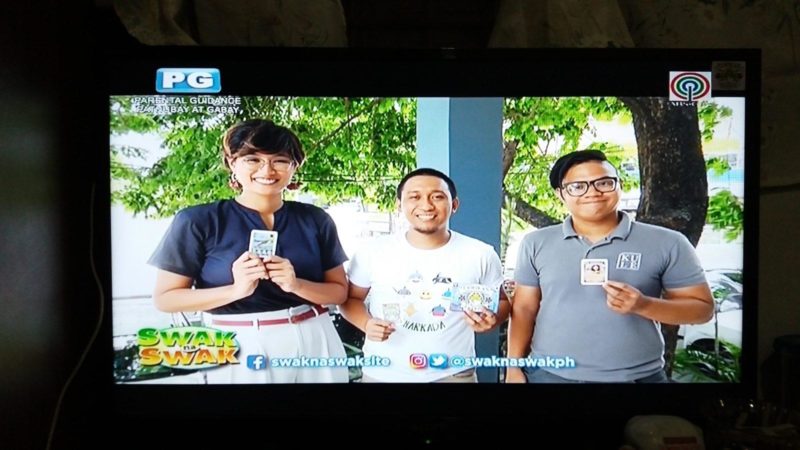 Initially working within the guidelines of designing “the simplest possible iteration for teachers and students to use [in the classroom,” Mykey created a system that could give even seasoned gamers a run for their money.

“It’s already hard enough designing a game for one purpose such as education or entertainment,” revealed Mykey. He also mentioned “the challenge of making something as faithful to the actual experience as possible to maximize the immersion.”

Pawikan Patrol features events that ordinarily take place on the beach, from locating nests to picking up garbage. “Coming off that story of me having hallucinations on the beach, my goal was to translate the real-world actions performed by real-world pawikan patrollers and compress it into a game that was both portable and easy to learn, while still retaining the hidden complexity of proper tabletop games that relied less on luck and more on deduction, probability, and skill (rather than memorization of facts).”

With Pawikan Patrol, Mykey and his team aimed to create a product for gamers and non-gamers alike. According to Mykey, he wanted to introduce non-gamers to modern tabletop gaming mechanics, while using the game to communicate the importance of environmental conservation through an immersive experience. 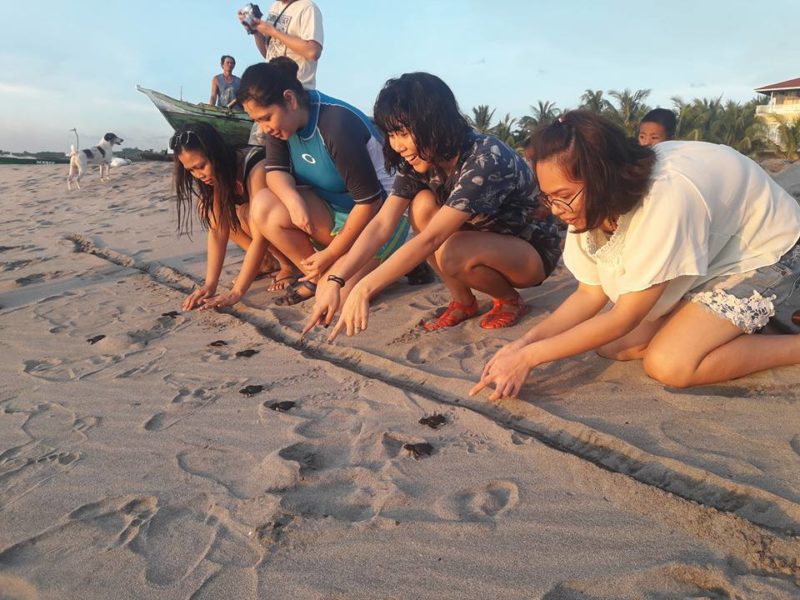 To ensure that Pawikan Patrol delivers authentic and engaging gameplay, Mykey drew plenty of inspiration from his own experiences. “One particular mechanic I’m proud of was depicting the behavior of black-tipped reef sharks, represented in the game as the Predator,” revealed Mykey. “One card and a few lines of text were enough to simulate what happens when they feed on their natural prey—which includes their own kind!—and when there’s too much trash on the beach.”

At different phases in the game’s development, Mykey and the team also consulted real pawikan patrollers: individuals and organizations who did actual conservation work, many of whom Mykey had already worked with before.

“Everything that went into designing the game was the result of what I learned from working with the experts and active consultation with them,” Mykey expounded. “In effect, this makes them my co-designers; my role was simply to translate all of their knowledge into game mechanics.”

So what did the actual pawikan patrollers think of the game? “In Danjugan Island, Negros Occidental, a group used Pawikan Patrol the Card Game for their youth camps and grassroots organizing activities. Based on the Danjugan Island Volunteers’ feedback, I guess the response has been positive, especially among the volunteers and community members!”

Since the game’s launch in October 2018, a number of schools and conservation groups have already adopted the game for use. 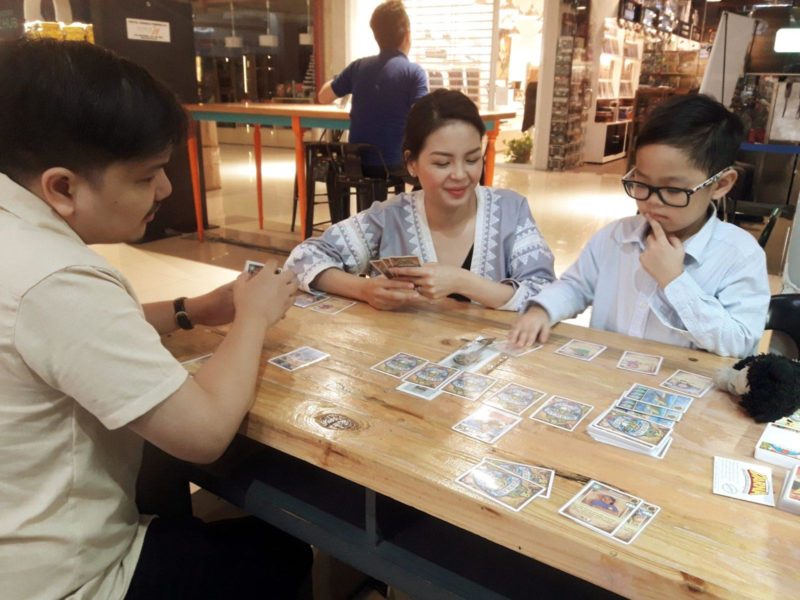 “[Parents and teachers] send me photos of their families and students playing the game, as well as stories of how the game made them feel a range of emotions such as the joy of finding a nest, sadness every time the Poacher kills a turtle, and frustration when they lose because the Poacher has killed too many,” Mykey shared with enthusiasm. “Pawikan Patrol succeeds at recreating the [many] aspects of an environmental conservation worker’s experience on the field, and raises a lot of questions about our role in the bigger scheme of things.”

Posted by Pawikan Patrol the Card Game on Sunday, April 26, 2020

Pawikan Patrol could not come at a better time, too. According to Mykey, the state of sea turtle conservation in the Philippines appears to have improved. Still, it’s difficult to gauge just how much good—or harm—we’ve already done to our pawikan population.

“Considering how pawikan sightings have increased over the years, I guess we have [improved], but if we want to make this sustainable, we have to make environmental conservation less of a token act and more of a lifestyle that can be applied to our everyday lives, even if we never visit the beach again.”