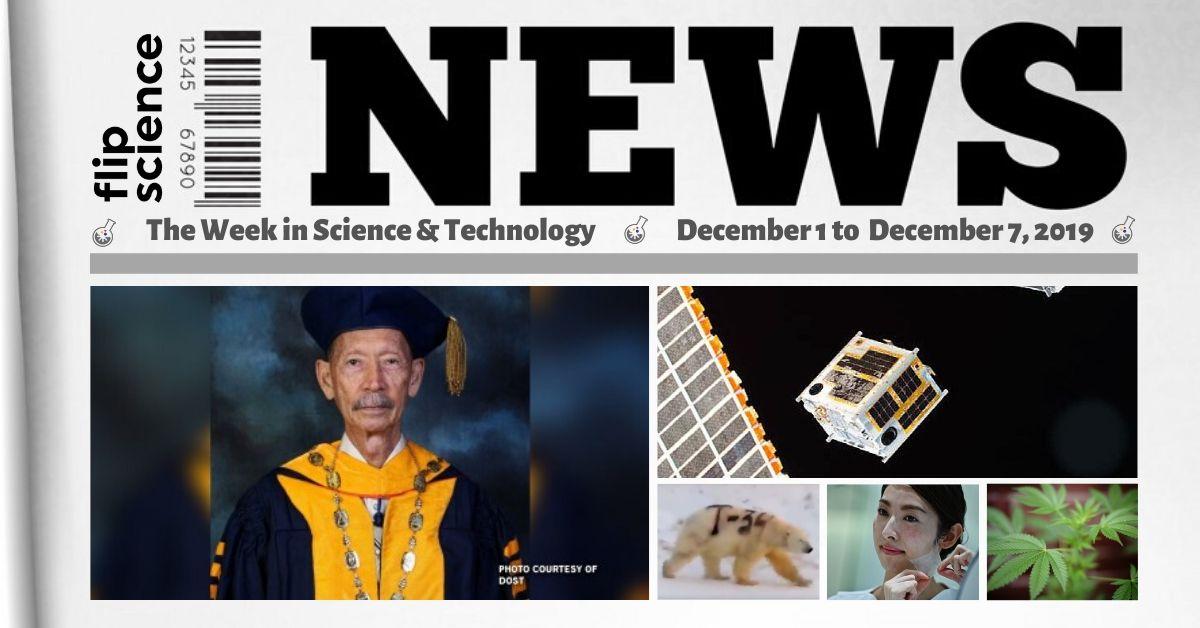 ICYMI: Science and technology updates from December 1 to 7, 2019.

Dr. Edgardo Gomez, National Scientist and founder-director of the University of the Philippines’ Marine Science Institute (UP MSI), passed away on December 1 at the age of 81. Gomez was an accomplished scientist and researcher, and was one of the country’s foremost experts on invertebrate biology and ecology, giant clam culture and restoration, and coral reefs. Gomez’s research paved the way for numerous worldwide marine conservation initiatives, turning the world’s attention to the need for urgent coral reef conservation.

At the United Nations’ climate conference in Madrid, Spain, Antique Representative Loren Legarda emphasized the potential of space science and technology in monitoring weather disturbances, mitigating disasters, and fighting climate change. Legarda also talked about the Philippine Space Agency (“still in its infancy stage”), as well as the need to support the various risk assessment initiatives in the Philippines.

A video of a polar bear whose side was spray-painted with the characters “T-34” made the rounds on social media, prompting netizens to fear for the bear’s safety. While some believe this to be the handiwork of pranksters, reports say that the bear was actually tagged by a group of scientists for research purposes. Regardless, wildlife experts warned that this could greatly affect the bear’s effectiveness as a hunter, and may result in its eventual death. Global warming is severely affecting the hunting behavior of polar bears, as the melting Arctic ice forces them to spend more time on land to forage for food.

Japanese firm Kao Corp has officially announced what has been called the world’s “first spray-on skin.” The moisturizing facemask is comprised of fibres that are 1/100th of a human hair in terms of thickness. When sprayed over an absorbent lotion, it forms a thin, translucent sheet that can be worn overnight or peeled off after a minute. According to the company, while similar technogies already exist, their product stands out because of its focus on fibres, reportedly making it more durable and flexible. They also mentioned its potential future applications for scar concealment or developing invisible medical patches.

Within the next few months, Brazilians with a prescription can start purchasing cannabis-based products from local pharmacies. Brazil joins Argentina, Chile, Mexico, Peru, and other Latin American countries in legalizing cannabis for medical use. According to the Brazilian Health Regulatory Agency (Anvisa), the newly approved regulation also permits laboratories to manufacture such projects. The agency is also looking into possibly permitting medical cannabis cultivation.