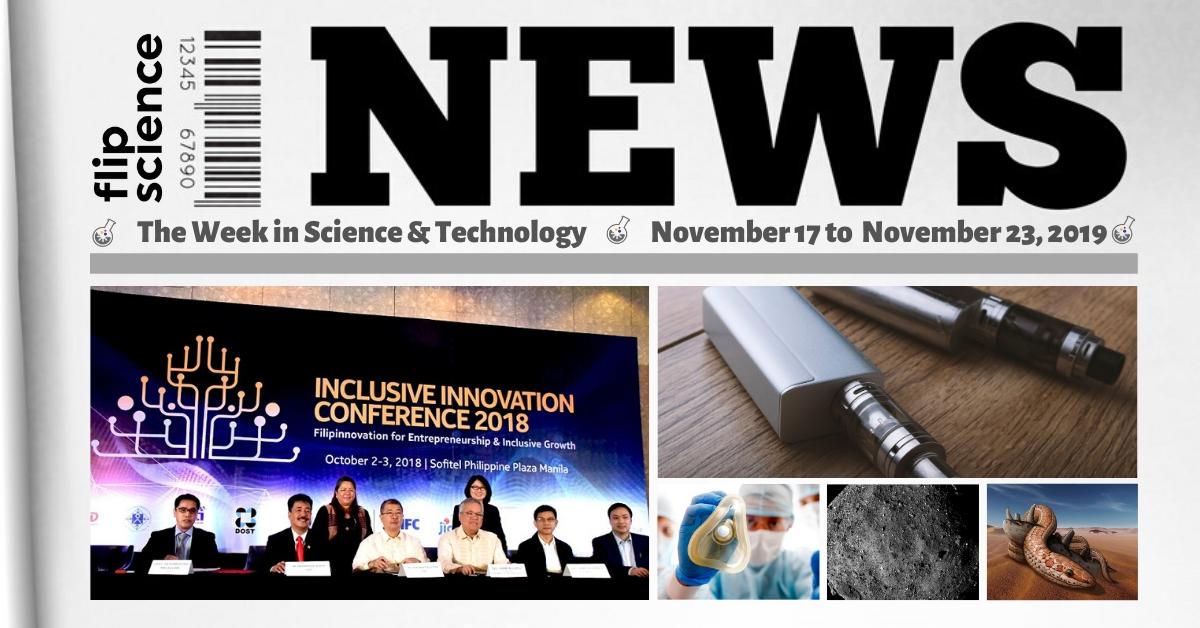 Last November 19, President Rodrigo Duterte announced a ban on the use of e-cigarettes in public areas. This declaration came on the heels of the country’s first confirmed case of e-cigarette or vape-associated lung injury (EVALI): a 16-year old-girl from Visayas.

In relation, two senators have said that they would work towards passing bills to “highly regulate” e-cigarette sales in the Philippines. According to Senate Ways and Means Committee chair Sen. Pia Cayetano, the Senate will continue to tackle SB 1074, which would impose higher taxes on e-cigarettes and alcohol to finance universal health care. Meanwhile, Sen. Sherwin Gatchalian also expressed plans to file a separate bill for regulating the local e-cigarette industry.

At the 3rd National TBI Summit held last November 20 in Pasig City, stakeholders formally signed the Memorandum of Understanding for the TBI 4.0 Partnership.

PCIEERD launched the TBI 4.0 Program with the aim of partnering and collaborating with incubators and accelerators from other countries to support Philippine startups. Since the inception of DOST’s TBI program in 2009, the agency has supported and worked with 45 incubators, 320 startups, and over 110 full-blown companies,  resulting in more than 1,200 jobs and over 280 million private investments.

A recently published study in the Proceedings of the National Academy of Sciences revealed a rather sweet scientific discovery. An international team of researchers found ribose and other sugars essential to life (such as arabinose and xylose) in the carbon-rich meteorites NWA 801 (type CR2) and Murchison (type CM2). This new find supports the hypothesis that some of the basic ingredients for life can come from chemical reactions in asteroids. Thus, it’s possible that meteorites could have brought some of life’s building blocks to Earth millions of years ago.

In a pioneering U.S. trial, doctors have placed human patients in a state of suspended animation (formally known as emergency preservation and resuscitation, or EPR). The process, which “involves rapidly cooling the brain to less than 10C by replacing the patient’s blood with ice-cold saline solution,” is intended to buy more time for medical professionals to deliver life-saving treatment and care to patients with “catastrophic” injuries and a very low chance of survival. The trial, which will run until the end of 2019, also aims to reduce the irreparable brain damage that survivors are often left with.

Named after a biblical snake, Najash rionegrina was an ancient snake from 95 million years ago. First discovered in 2006, it was unique in that it was a desert snake (not an aquatic one) with hind legs. Unfortunately, initial descriptions of N. rionegrina were based on a fragmented skull, meaning researchers were unsure about the characteristics of this prehistoric reptile’s head. However, a recently published study in the journal Science Advances revealed a new analysis of N. rionegrina based on what has been described as a “beautifully preserved” skull.