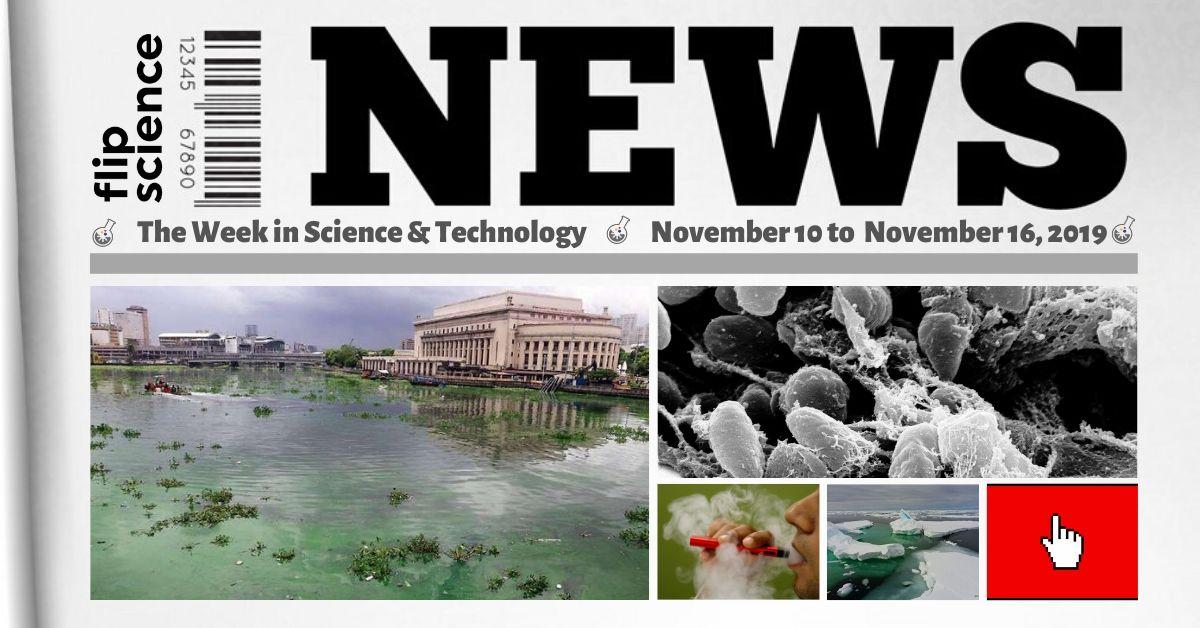 As confirmed by the Department of Health (DOH), a 16-year-old girl from Visayas received treatment for e-cigarette or vape-associated lung injury (EVALI) last October 21. It is the first confirmed case of EVALI in the Philippines.

The girl had been using e-cigarettes while also smoking regular cigarettes for six months. After experiencing severe shortness of breath, the dual-using patient was rushed to the hospital, where she was admitted to the intensive care unit. She has been discharged, but is currently being monitored by both the DOH and her attending physician.

Two decades after the establishment of the Pasig River Rehabilitation Commission (PRRC), President Rodrigo Duterte has ordered its abolishment. Executive Order (EO) No. 93, which states that the PRRC’s functions and powers will be transferred to the Manila Bay Task Force, Department of Environment and Natural Resources (DENR), Department of Housing and Urban Development (DHUD), Metropolitan Manila Development Authority (MMDA) and the Department of Public Works and Highways (DPWH), comes on the heels of Duterte’s recent claim that the river is “uncleanable.” In a statement, the PRRC vowed to follow the order and provide assistance in making the transition of powers smoother. Read the full story.

Earlier this year, a Mongolian couple died from bubonic plague after consuming marmot meat–and now, the same deadly pathogen, Yersinia pestis, has infected two people from Inner Mongolia with pneumonic plague. Doctors in Beijing’s Chaoyang District diagnosed the two patients with the disease, and are providing them with the necessary treatment. As the plague is highly infectious, authorities have also reportedly implemented measures to prevent its spread.

Recently published findings in Scientific Reports reveal that climate change and melting Arctic sea ice have opened the floodgates for a lethal pathogen, Phocine morbillivirus (formerly Phocine distemper virus, or PDV), to infect and kill key marine species in the Northern Pacific Ocean. First identified in 1988, PDV was pinpointed as the reason behind the deaths of 18,000 harbor seals (Phoca vitulina) and 300 grey seals (Halichoerus grypus) that year. It reemerged in the North Sea in 2002 (killing 21,700 seals, or more than half of the seal population) and in Alaska in 2004 (infecting northern sea otters).

Could addiction to online shopping be a sign of a mental health disorder?

One in three buying-shopping disorder (BSD) patients also reported signs of addictive online shopping, according to a newly published study in Comprehensive Psychiatry. BSD is characterized by “extreme preoccupation with and craving for buying and/or shopping, as well as irresistible and identity-seeking urges to possess consumer goods.” The BSD patients in the sampled group who indicated addiction to online shopping were generally younger, suffering from higher levels of anxiety and depression, and were more likely to exhibit severe BSD symptoms.