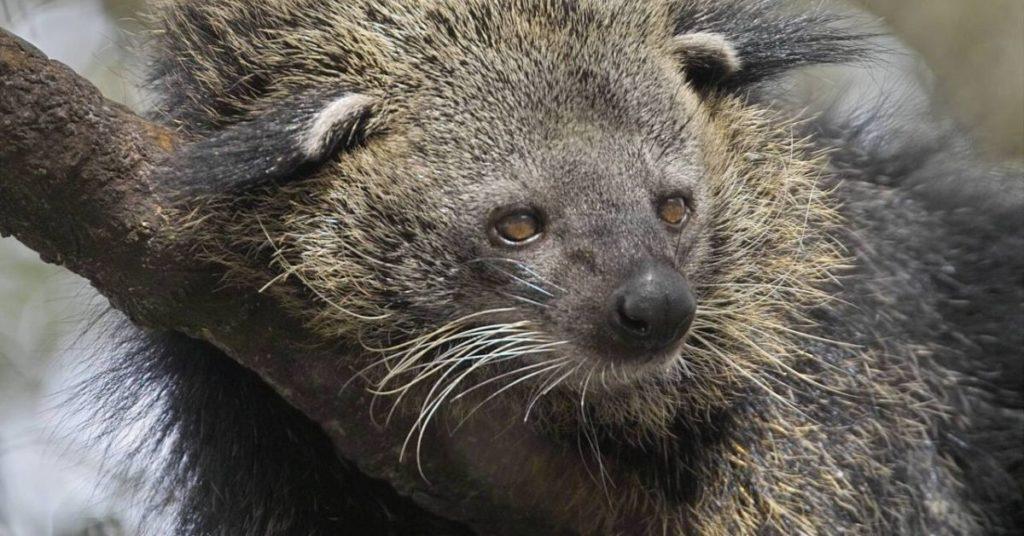 (Updated on January 3, 2021) Despite what its name and appearance may suggest, the binturong or Palawan bearcat (Arctictis binturong) is neither a bear nor a cat. It’s a member of the family Viverridae—the same family civets belong to—and is the sole member of its genus. Oh, and it also made a guest appearance on American comedian Conan O’Brien’s show.

While many references describe the binturong as endemic to Palawan, it’s actually widely distributed in Asia. One can find the binturong scattered across Bangladesh, Bhutan, Burma, Cambodia, China, India, Indonesia, Laos, Malaysia, Nepal, Sri Lanka, Thailand, and Vietnam, albeit in small numbers.

Growing up to 3 ft (0.9 m) long and weighing up to 50 lbs (22.68 kg), the binturong has coarse, thick, black-brown fur and a long, muscular tail. It uses this agile appendage to help it climb up and down trees. This nocturnal animal is a camouflage expert, hiding itself in tree canopies and dense vegetation. Its diet consists primarily of fruit (hence its significant role in seed dispersal), but it also eats meat.

The IUCN classifies the binturong as Vulnerable. Deforestation and the illegal wildlife trade are the greatest contributors to the species’ decline. Hunters target the Palawan bearcat for its fur, meat, and scent glands. Worse, it has increased in popularity as an exotic pet, despite its temperament making it ill-suited for domestication.

The meaning of the word “binturong,” just like its language of origin, has been lost to time. Sadly, manmade threats may soon push the binturong to join them in extinction.