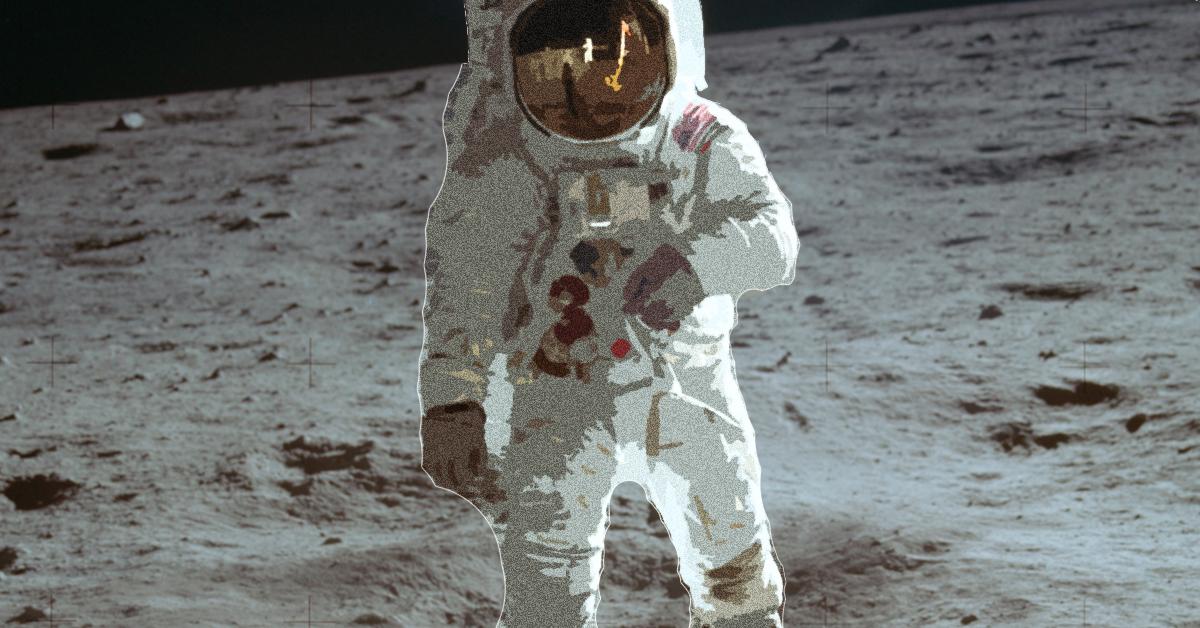 (Updated on July 17, 2020) Half a century ago, man literally took a bold step forward, in a way that had never been done before.

Alighting from Apollo 11’s Eagle Lunar Module, Neil Armstrong became the first person to set foot on the Moon. This milestone in space exploration took place on July 21, 1969, at 2:56 UTC (10:56 AM, Philippine time), six hours and thirty-nine minutes after their spacecraft had landed on Earth’s natural satellite. Edwin “Buzz” Aldrin became the second man to walk on the moon when he followed Armstrong at 3:15 UTC, nineteen minutes later.

To celebrate the anniversary of the historic Apollo 11 mission, here are five interesting things about the moon landing (and the crew that successfully pulled it off).

1. It took 37 years to verify exactly what Neil Armstrong said when he first stepped on the Moon.

“That’s one small step for a man, one giant leap for mankind.”

We all know Armstrong’s first words on the Moon by heart. Or do we?

Based on the offical recording, what we actually heard was “That’s one small step for man, one giant leap for mankind,” without the “a.”

If that were the actual quote, then he committed a grammatical flub: He basically said that mankind took a small step and a giant leap at the same time. The difference in meaning is pretty significant. (Armstrong, for his part, insisted for the longest time that he said it with the “a.”)

In 2006, a computer programmer named Peter Shann Ford decided to answer the question once and for all. He downloaded Armstrong’s recording and ran it through software that gives disabled people the ability to communicate electronically via their nerve impulses. He found a 35-millisecond “bump of sound” between the words “for” and “man”: too short for human ears to register, but enough time to account for the missing article.

Thirty-seven years to settle this issue is quite “a” long time, wouldn’t you agree?

2. Michael Collins does not enjoy talking about the mission. (And no, he wasn’t “lonely.”)

The third member of the Apollo 11 crew, Michael Collins, did not join Armstrong and Aldrin on the lunar surface. Instead, he remained in orbit, circling the Moon for over 24 hours until it was time for the three of them to fly back to Earth. As a result, Collins frequently rece about how alone he must have felt. Understandably, being asked the same thing over and over again for half a century has left him less than amused.

In a recent interview, Collins shared his sentiments: “It’s a lot easier to not talk to a bunch of very intelligent, very determined journalists who are going to beat me up one side and down the other and pry into my inner workings,” says Collins. “I was not lonely, despite some news headlines that said: ‘Collins is the loneliest man that has ever endured a lonely orbit, in a lonely place … God, wasn’t he lonely!’”

When asked about what he plans to do next, here’s what he had to say: “I’m going to find a nice big rock, and I’m going to hide under it.”

3. The Apollo 11 landing site was selected based on seven criteria and two years’ worth of research.

To this day, some are still skeptical about whether the Moon landing actually happened. This is despite the countless testimonies and pieces of evidence supporting its veracity. (Then again, in a society where some still believe that Earth is flat, it’s probably not surprising.) It’s still a bit disappointing, though, given how much time, effort, and planning went into the project. In fact, simply choosing the exact location of Apollo 11’s landing site took NASA two years of research!

On February 8, 1968, NASA’s Apollo Site Selection Board narrowed it down to five possible landing spots, from an initial list of 30 potential candidates. The Board chose them based on the following criteria:

•Smoothness of the area (the sites should have relatively few craters);
•Approach paths (there should be no large hills, tall cliffs or deep craters which could cause incorrect altitude signals to the landing radar);
•Propellant (the sites were selected to allow for the expenditure of the least amount of propellant);
•Recycling during countdown (the sites were selected to allow for the recycling time of the Saturn 5 if the countdown were to be delayed);
•Free-return (the sites must be within reach of the Apollo spacecraft in the free-return trajectory, that is a path that would allow a coast around the Moon and safe return to Earth without any engine firings should a problem arise on the way to the Moon);
•Lighting (for optimum visibility during the landing approach, the Sun angle should be between 7 and 20 degrees behind the LM; for any given site, this results in a one-day launch window per month); and
•Slope (the general slope of the landing area must be less than 2 degrees).

4. The Apollo 11 crew had a… peculiar way of pooping in space.

And since there isn’t any gravity to make sure that their, er, dirty business stays down, the Apollo 11 crew’s entire defacation process was… a lot more complicated.

According to NASA, the astronauts used “a plastic bag which was taped to the buttocks to capture feces,” which is a fancy way of saying that they basically had to crap in a butt-bag.

The entire process was quite an adventure: They had to remove all their clothes, get as far away from their teammates as possible, and pray that everything goes smoothly into where they’re supposed to go, in a manner of speaking. To break it off (no gravity to do the job for them), they had to use their fingers.

(Let that sink in for a moment.)

They then had to kill the poop bacteria with a special fluid, seal it in the bag, mash everything inside to make darned sure that they mixed, and then clean everything up with wet wipes.

But what about when Armstrong and Aldrin were walking on the Moon? Well, it gets better. Officially, they wore “maximum absorbency garment[s]” designed for “fecal containment.” There’s really no need for us to beat around the bush, though: They were wearing space diapers, plain and simple.

Interestingly enough, “How do astronauts poop in space?” is probably the one question Collins has been waiting to hear all his life.

5. The U.S. president had an alternate speech ready in case Armstrong and Aldrin couldn’t make it back to Earth.

Today, we celebrate the 50th anniversary of mankind’s out-of-this-world milestone. At the time, however, nobody could say for sure that the moon-walking astronauts could safely make it back to Earth. Thus, then-U.S. President Richard Nixon had a speech prepared by William Safire, which he would have read in the unfortunate event that Armstrong and Aldrin could not come home. (As Collins didn’t join them on the Moon, they figured that he’d have a higher chance of returning.)

Here’s the speech, in full:

In their exploration, they stirred the people of the world to feel as one; in their sacrifice, they bind more tightly the brotherhood of man.

In ancient days, men looked at stars and saw their heroes in the constellations. In modern times, we do much the same, but our heroes are epic men of flesh and blood.

Others will follow, and surely find their way home. Man’s search will not be denied. But these men were the first, and they will remain the foremost in our hearts.

For every human being who looks up at the moon in the nights to come will know that there is some corner of another world that is forever mankind.

Fortunately, we never had to hear Nixon read these words.