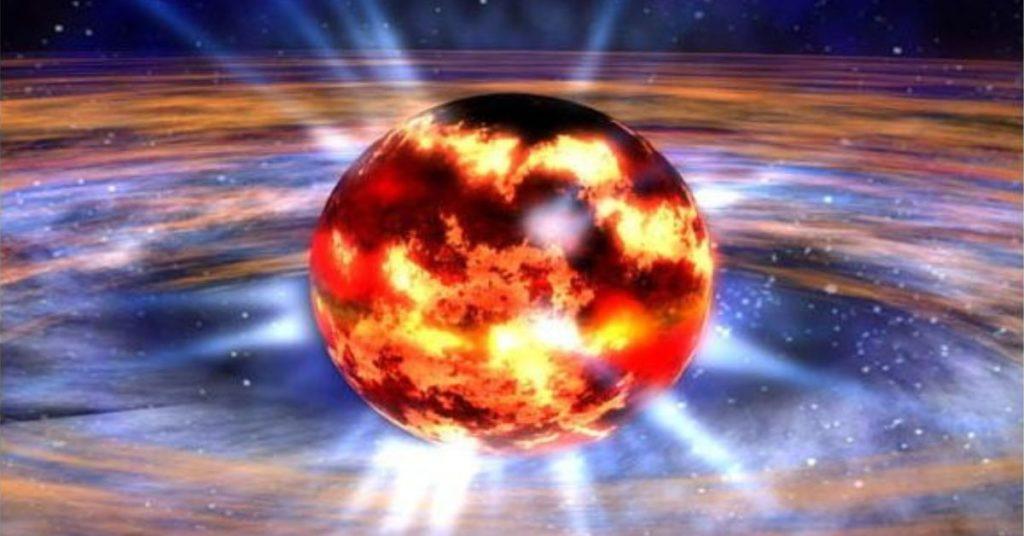 FlipFact of the Day: Every star represents a cosmic balancing act: a mass of gas and dust pulled together by gravity, with energy from the nuclear fusion of hydrogen in its core pushing outward and preventing it from collapsing into itself. Eventually, when the star uses up all of its hydrogen, the balance tips. In the case of particularly massive stars, this can create a powerful, luminous explosion known as a supernova. Meanwhile, the gravitational pressure from its still-collapsing core compresses its protons and electrons to form neutrons, packing so much mass into such small particles. This incredible sequence of events results in what we call a neutron star, the densest form of observable matter in the universe.

On average, neutron stars measure about 12.4 to 14.9 mi (20 to 24 km) in diameter, but can be twice as massive as our Sun (which is over 58,000 times larger). If one could somehow escape a neutron star’s gravitational pull (around 2 billion times stronger than Earth’s gravity) long enough to obtain a teaspoonful, that tiny amount would weigh a billion tons—about as heavy as Mount Everest. In fact, scientists say that if a neutron star could get any denser, it would become a black hole.

Due to the power generated by its spectacular birth, a neutron star spins hundreds of times per second. When some neutron stars spin, they expel beams of radiation that look like pulses of light to us; hence, we call them pulsars. The fastest-spinning pulsar known to us, PSR J1748−2446ad, was discovered in 2004. It spins 43,000 times per minute, or about 716 times per second.

Experts say that there are billions of neutron stars scattered across the cosmos. So far, we’ve only found around 2,000 in the Milky Way.

As you can probably imagine, having a neutron star anywhere near the Solar System would be catastrophic. Planets would have their orbits disrupted, and could even be ripped apart. Fortunately, the closest known neutron star is 500 light-years away. Besides, our Sun is about 5 billion years away from death—and, because it’s an average-sized star in a single-star system, will just shrink into a white dwarf—so we don’t have to lose sleep over a twinkling star killing us all anytime soon.