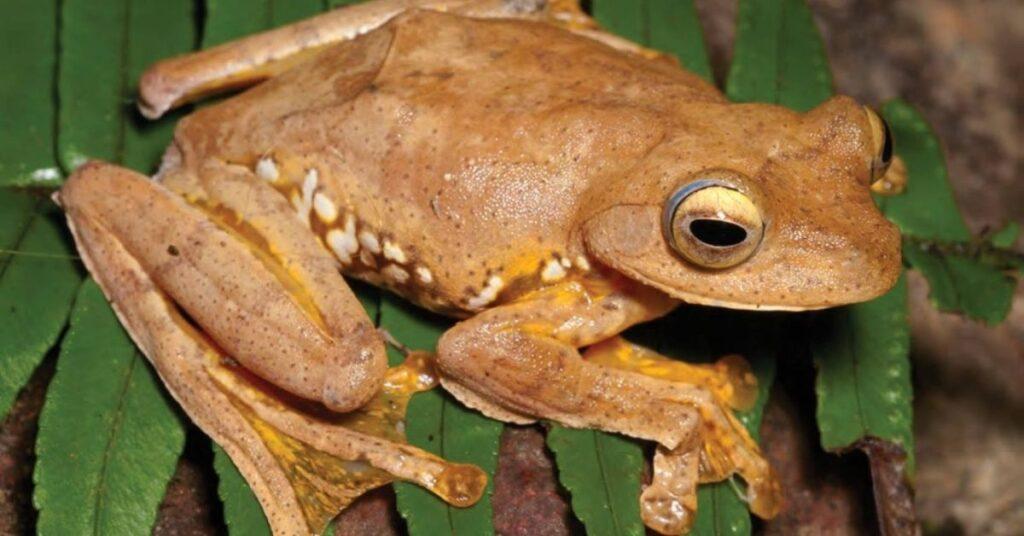 When Dr. Jose Rizal was in political exile in Dapitan, he spent a considerable amount of time studying nature. He collected numerous specimens of reptiles, amphibians, birds, insects, plants, and shells, many of which he sent to the Ethnographic Museum in Dresden, Germany for proper identification. One of them was a type of frog that, in 1899, was given a scientific name that honored Rizal by German zoologist Oskar Boettger: the harlequin tree frog (𝘙𝘩𝘢𝘤𝘰𝘱𝘩𝘰𝘳𝘶𝘴 𝘳𝘪𝘻𝘢𝘭𝘪).

Officially designated as 𝘙𝘩𝘢𝘤𝘰𝘱𝘩𝘰𝘳𝘶𝘴 𝘱𝘢𝘳𝘥𝘢𝘭𝘪𝘴 — the binomial name given to it by British zoologist Albert Günther, the first person to describe it, in 1858 — the harlequin tree frog (or panther flying frog) is perhaps best known for its webbed fingers and toes. It uses its vibrant red digits to glide from surface to surface, enabling it to stay out of reach of any ground-level predators. This method of “controlled flying” lets it travel several meters through the air, which is impressive considering the airborne amphibian’s size. Its other distinguishing characteristics are its reddish-brown body, yellowish streaks, and markings on its sides.

The harlequin tree frog isn’t endemic to the Philippines, though. It also dwells in Southeast Asian forests, such as those in Indonesia, Malaysia, Brunei, and Thailand. This unique frog builds foam nests above water, and thrives in freshwater marshes and moist forest areas. Unfortunately, habitat loss also threatens its existence.

Today’s Science History Milestone: On December 30, 1924, American astronomer Edwin Hubble announced his discovery of a spiral nebula, Andromeda, beyond the boundaries of the Milky Way—proof of the existence of other galaxies in the universe. It was a discovery that became possible because of the work of Henrietta Swan Leavitt, an equally significant but less famous astronomer. Twelve years before Hubble’s announcement, Leavitt figured out that the periodic dimming of Cepheid stars was a means of measuring the distances between cosmic objects. Applying this knowledge, Hubble looked for Cepheid stars in Andromeda and determined their distance, subsequently shattering previously held beliefs about the size of the universe.