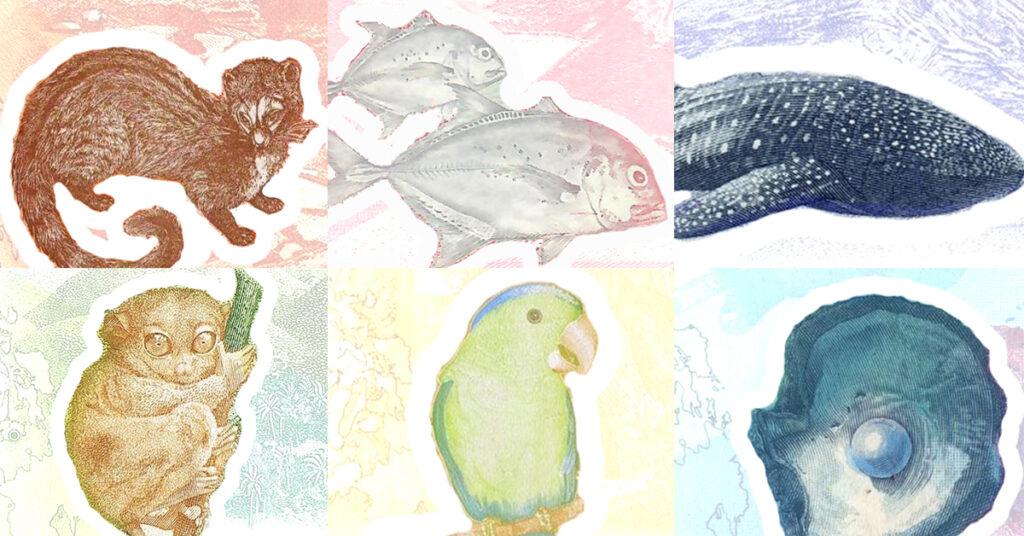 The Philippines is home to a vast assortment of unique and interesting wildlife, from the crescent-horned tamaraw to the peculiar Mindanao flying dragon. Travel all over the country’s many islands, and you’ll find them nesting atop towering trees or swimming around the many nooks and crannies of coral reefs.

Or you could just take a peek in your wallet—literally.

In 2010, the Bangko Sentral ng Pilipinas put the New Generation Currency Series, or what we now know as the “new” Philippine bills and coins, into circulation. The revamped paper bills were a collaboration between two local design studios. Studio 5 developed the obverse (principal) sides, spotlighting notable people, places, and events in Philippine history. Meanwhile, Design Systemat designed the reverse sides, featuring tourist attractions and wildlife in the country.

Unfortunately, there were a number of errors on the bills that experts noticed after the new currency series was released. Aside from certain geographical inconsistencies, the scientific names were written incorrectly. (Scientific names must always be italicized, and only the first word, the genus or generic name, should start with a capital letter.) Some of the animals even sported incorrect coloration, which the designers explained as a “function of printing capability limitation.”

That’s not to say, though, that our vibrantly-colored bills aren’t worth a second glance. Far from it, in fact. Check out the different fauna featured on currently circulating Philippine banknotes: 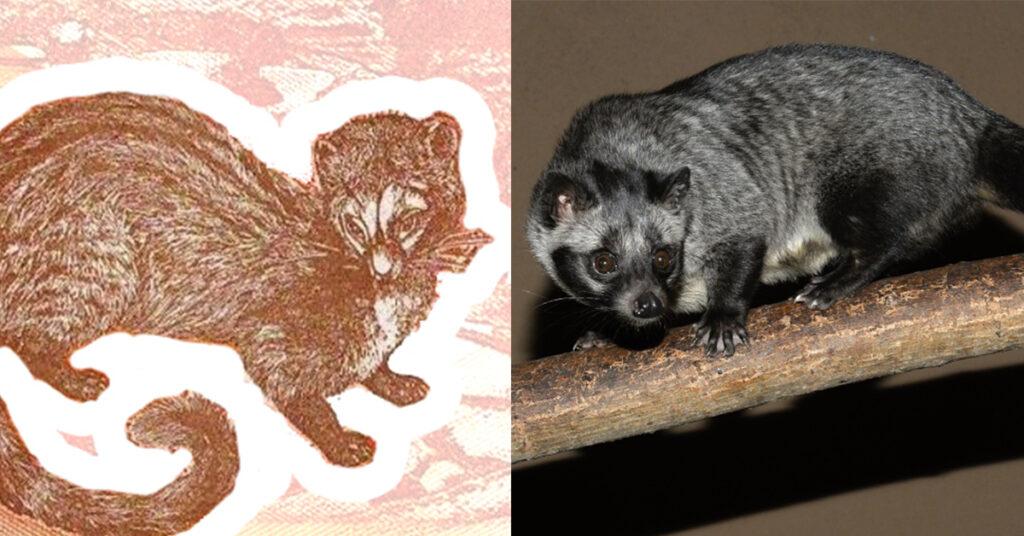 No doubt the bill the majority of us see and use regularly, the 20-peso bill shows an image of an Asian palm civet (or the musang) with the Banawe Rice Terraces in the background. Native and widespread across many regions within and outside of Asia, the musang is also called “weasel cat” due to how it resembles both animals (its young are even called kittens). The musang belongs to the family Viverridae, making it a relative of the strange-looking Palawan bearcat.

Solitary, nocturnal, and quite reclusive, Asian palm civets produce their own “oil.” Extracted by scraping it out of the civets’ scent glands, this oil is prized and used as a perfume for its fragrant musk. These civets also play a significant role in coffee production, due to how coffee cherries gain a unique flavor after passing through their digestive system. (Yes, the people who specialize in selling this type of coffee literally scoop them out of the civets’ feces.) And while this may all sound interesting at first, both are a testament to how these civets are victims of human exploitation. 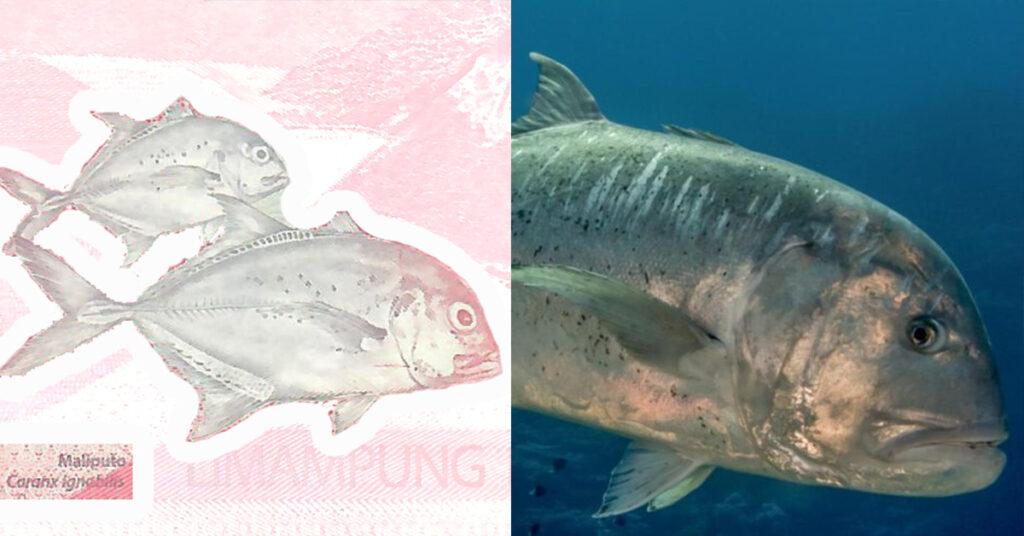 A freshwater variant of the giant trevally, the maliputo (Caranx ignobilis Foorskal) is a predatory fish endemic to Taal Lake (which serves as the backdrop of the banknote). Weighing up to 80 kg (176 lb), they are a common delicacy in Batangas, served fried or in standard Filipino dishes like sinigang.

However, as one of the most commercially fished species within the lake, the maliputo population has steadily declined due to overfishing. Due to its value as a staple of both the local ecosystem and the local market, concerned groups and local government have launched conservation efforts in recent years to keep their numbers stable. 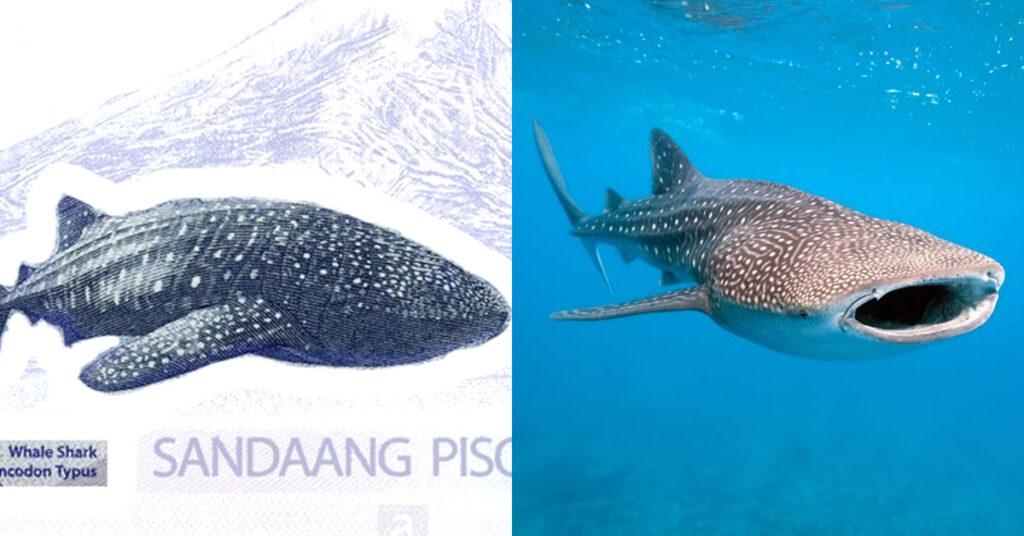 Depicted alongside the majestic Mayon Volcano is perhaps one of the most well-known animals on this list. Whale sharks (butanding) are the largest living species of fish in the world. Reaching around 5.5 to 10 m (18 to 32.8 ft) in length and up to more than 20.6 tons (18,688 kg) in weight, these gentle giants swim peacefully in their underwater habitats as filter-feeders. In order to survive, they filter out their microscopic prey from several tons of water on the daily.

Despite warnings from environmentalists and researchers, whale sharks remain tourist attractions in places such as Leyte and Sorsogon. Fortunately, the law protects them from all commercial fishing purposes. 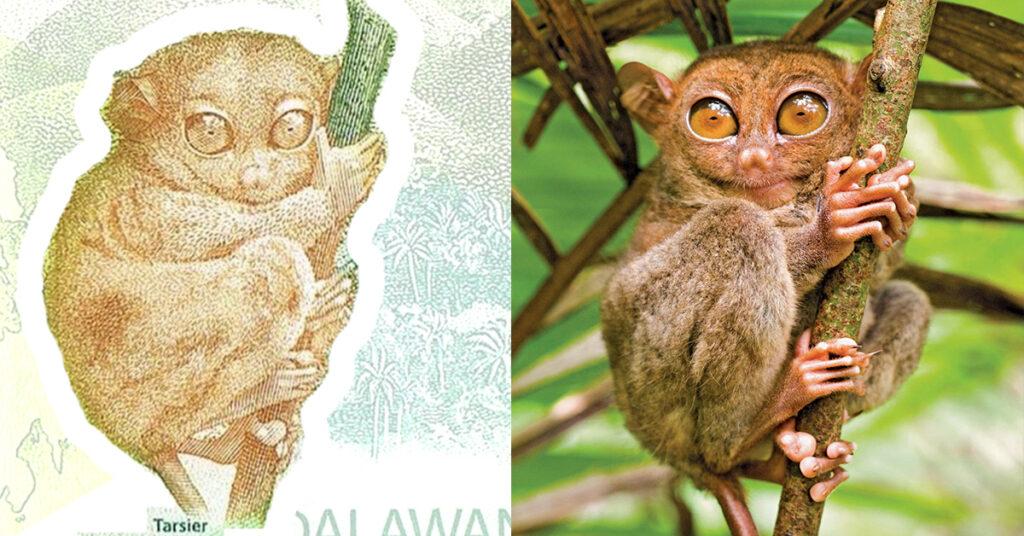 Now, this little fella’s one of the weirder ones.

Drawn in front of Bohol’s Chocolate Hills on this banknote, the Philippine tarsier  is one of the smallest primates around. This tiny critter possesses a body that’s only about 9 to 16 cm (3.5 to 6 in) long and a tail that measures around twice that. What makes it a truly unique (or to some, creepy) sight, though, is the size of its eyes in relation to its body. Interestingly, it can’t move its eyes. They’re fixed unto its skull, which explains its death stare. To compensate, this tiny primate can rotate its neck a full 180 degrees. Its four limbs have elongated fingers that help it climb trees and groom itself.

Sadly, as with many other species, irresponsible human development has continuously threatened tarsiers. Their rainforest habitats on the islands of Bohol, Samar and Leyte have steadily disappeared over the years. In fact, 2017 estimates peg the tarsier’s surviving wild population at a measly 5,000-10,000 individuals. 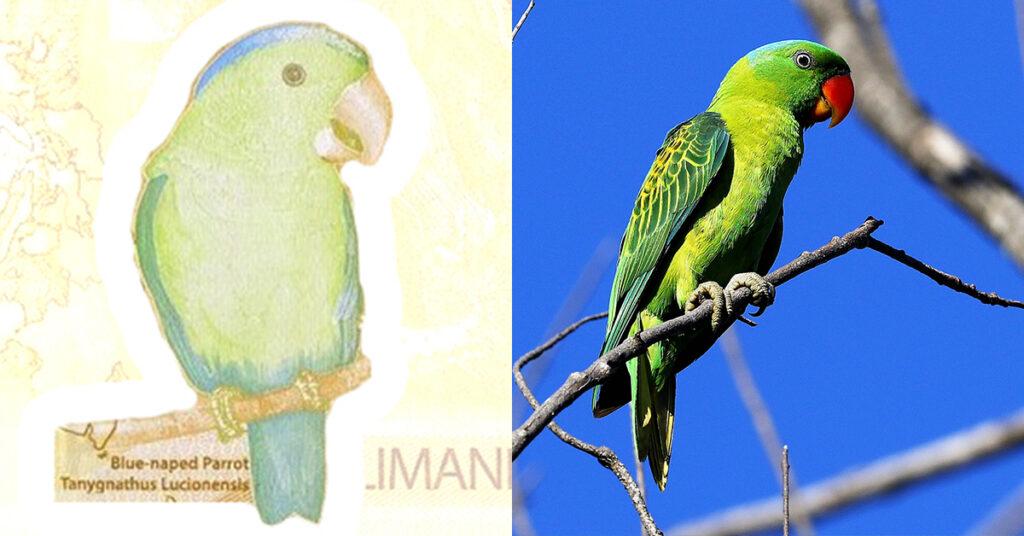 The blue-naped parrot (or pikoy) sports a vibrant color scheme, in stark contrast to the Puerto Princesa Subterranean River National Park illustrated behind it.

This species can thrive near lowland and coastal environments, whether they’re lush forests or landscaped areas. Donning blue “crowns,” they are quite social, and will often travel in flocks and share communal roosts in between flights.

Unfortunately, the pikoy is yet another species on the brink of serious population decline due to human activity. Though not exactly defined as a threatened or endangered species, the trading and selling of these birds puts them in very real danger. It’s imperative that local authorities closely monitor and regulate these activities, especially as the pikoy‘s numbers have reportedly plummeted in the last century. 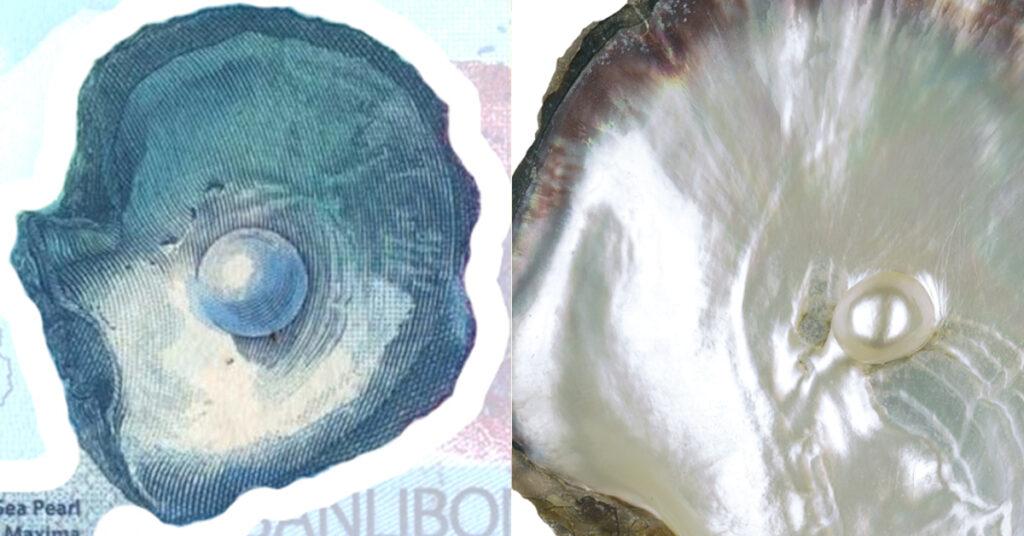 A lovely nod to how the Philippines is nicknamed the Pearl of the Orient, the 1,000-peso bill–the banknote with the highest individual value in our currency—has an open Pinctada maxima oyster with a pearl nestled right at its center. Appropriately enough, the bill features P. maxima alongside the Tubbataha Reefs Natural Park.

Some experts classify silver-lipped and gold-lipped oysters as variations of this species, though a consensus has yet to be reached. P. maxima oysters produce South Sea (or Philippine) pearls when foreign objects slip their way into these oysters’ shells. Proclamation No. 905 recognizes the South Sea pearl as the country’s national gem.

The Philippines is one of the last and most biodiverse treasure troves of unique wildlife in the world. Thus, it’s only fitting that the images of these incredible animals—truly our country’s greatest wealth—become fantastic fixtures on our paper bills.—MF