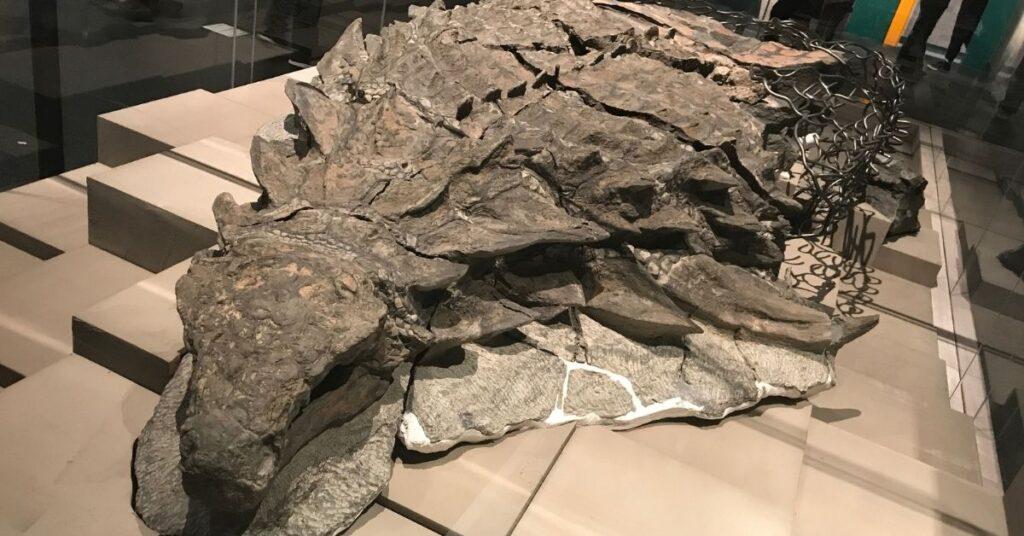 When heavy equipment operator Shawn Funk clocked in at the Suncor Millennium Mine in Canada on March 21, 2011, he probably expected an ordinary day full of construction work. Little did he know that he’d stumble upon one of the most amazing paleontological discoveries in history: a “mummified” dinosaur.

Two days later, the Royal Tyrrell Museum sent scientist Dr. Donald Henderson and senior technician Darren Tanke to inspect the specimen. Based on the pictures they’d received, they were expecting to find a prehistoric marine reptile. To their surprise, it was an extremely well-preserved nodosaur, an herbivore belonging to the group of armored dinosaurs known as ankylosaurs.

Within a week, they worked on extracting the so-called “Suncor nodosaur.” At one point, the massive chunk of rock housing most of it broke under its own weight, prompting museum staff to cover the pieces in plaster to save them. After the remains were transported to the Royal Tyrrell Museum, technician Mark Mitchell chipped away at the dinosaur’s rocky prison. It was a gargantuan task that took him nearly six years to complete.

The result of Mitchell’s hard work was, in a word, stunning. The specimen, which measures 18 ft (5.5 m) long and weighs 2,500 lb (1,134 kg), includes the animal’s head, tail, and partial skeleton. While most prehistoric remains end up compressed after fossilization, this one retained the nodosaur’s original shape, as well as the arrangement of its armor plates and even some skin and soft tissue. Basically, it’s the closest thing to what this dinosaur looked like when it was still roaming the Clearwater Formation during the Early Cretaceous period. It’s likely that upon its death, the dinosaur sank to the bottom of an ancient seaway, its front half preserved in mud over the course of 110 million years.

This one-of-a-kind dinosaur was named 𝘉𝘰𝘳𝘦𝘢𝘭𝘰𝘱𝘦𝘭𝘵𝘢 𝘮𝘢𝘳𝘬𝘮𝘪𝘵𝘤𝘩𝘦𝘭𝘭𝘪 (“Mark Mitchell’s northern shield”), in honor of the man who devoted 7,000 hours of his life to freeing the statuesque “sleeping dragon.” Unsurprisingly, 𝘉. 𝘮𝘢𝘳𝘬𝘮𝘪𝘵𝘤𝘩𝘦𝘭𝘭𝘪 is now one of the museum’s top attractions.

Today’s Science History Milestone: On December 29, 1959, American theoretical physicist Richard Feynman gave a talk titled “There’s Plenty of Room at the Bottom” before the American Physical Society (APS) at the California Institute of Technology. There, Feynman discussed the possibilities of constructing and controlling things at the atomic and molecular scale. Many consider this to be the birth of nanotechnology as a field.