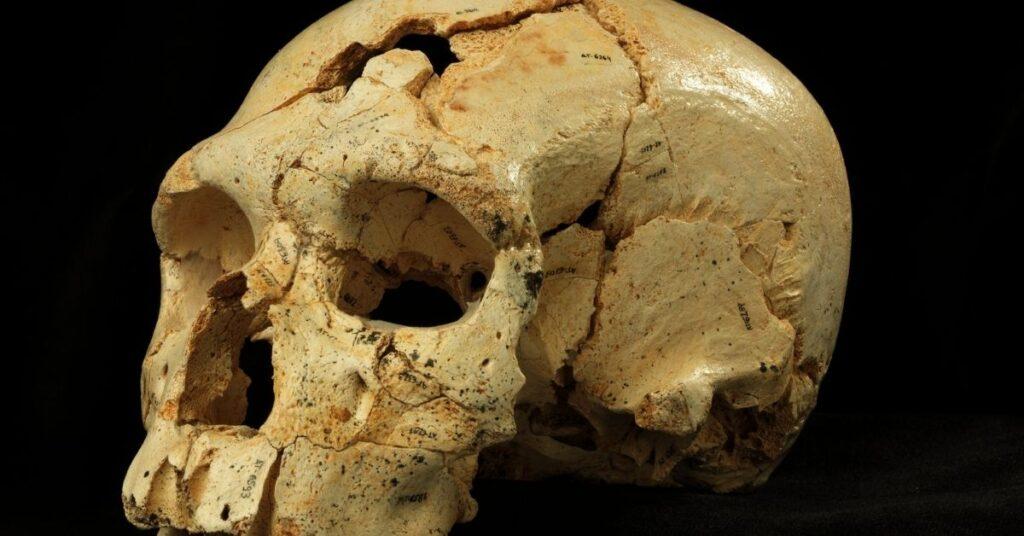 No one could have expected that a skull fragment from a Spanish cave would unearth a 430,000-year-old cold case—one that’s said to be the earliest known homicide to date.

Discovered in Sima de los Huesos (“pit of the bones”) in the Atapuerca Mountains, the skull designated Cranium 17 (Cr-17) is shrouded in mystery. We know very little about it; we’re not even sure about the sex or the species of its owner. It did, however, bear signs of blunt force trauma: mainly, two prominent holes on the left side of the forehead.

At first glance, it would have been easy to dismiss this as a simple case of an early hominin taking a literal (and lethal) fall. But to trained eyes that had an inkling of what they were looking at, an entirely different story began to become clearer.

The team studying this Stone Age stumper had a few key realizations. For starters, based on their severity, it’s highly unlikely that the two wounds could have resulted from just an accidental tumble. Additionally, the chemical makeup and structure of the bone surrounding the holes revealed that the wounds didn’t heal before the individual died, meaning they were the likely cause of death. Furthermore, the holes had a consistent shape and size, suggesting that they were the products of a single tool.

The bone bed where they found Cr-17 was another mystery in itself. It had the bones of 28 individuals, all in all: Did every single one of them fall into the pit, or did other hominins intentionally deposit their bodies there?

Through rigorous scientific analysis and via process of elimination, the team concluded two things. First, they determined that the injuries on Cr-17 were likely the result of “deliberate, lethal interpersonal aggression.”

Second, they figured out that the pit was likely a place where hominins deposited their dead. (This is why the find also represents “the earliest funerary behavior in the human fossil record.”)

Even with limited data on hand, the researchers were able to eliminate other possibilities and deduce the answers to these prehistoric puzzles. It may have been a complex process with numerous variables, but the conclusions aren’t that surprising. After all, there is only one truth here: Cr-17 died a violent death.

Today in Science History: On December 3, 1933, Dutch atmospheric chemist Paul J. Crutzen was born. He won the 1995 Nobel Prize in Chemistry alongside Mario J. Molina and F. Sherwood Rowland “for their work in atmospheric chemistry, particularly concerning the formation and decomposition of ozone.”