Our knowledge of dinosaurs has come a long way since 1824, when the first non-avian dinosaur, Megalosaurus, was officially named. However, there’s still much we don’t know about these so-called “terrible lizards.”

Fortunately, modern science has answers for some of our burning questions about these fascinating prehistoric creatures.

Why did the dinosaurs die out?

The dinosaur extinction event occurred after the 10 km-wide Chicxulub asteroid crashed into the Yucatan Peninsula in Mexico approximately 66 million years ago. In addition to powerful earthquakes, volcanic eruptions, massive tidal waves, acid rain, and wildfires all over the world, the impact is also believed to have caused a global dust cloud to cover the atmosphere and block out the sun’s light for an extended period of time. That, combined with a declining population of plant-eating dinosaurs across the world, is believed to have been the catalyst for their extinction.

Is it possible to resurrect dinosaurs using their DNA?

Simply put, no. The dinosaurs have been dead for so long that their genetic material is no longer viable for cloning.

“With current technology, DNA samples only remain useful for about 1 million years,” explained Beth Shapiro, an evolutionary biologist from the University of California, Santa Cruz (UCSC), in a 2015 interview with Smithsonian Magazine. “So theoretically, we could clone a Neanderthal, but not a Triceratops last seen 65 million years ago.”

Is it true that fossil fuels come from dinosaur fossils?

No. Fossil fuels actually come from ocean-dwelling creatures called phytoplankton or microalgae. They end up at the bottom of the ocean when they die, buried under sediment over millions of years. Over time, their accumulated remains become solid organic compounds called kerogen. These compounds eventually transform into hydrocarbons–the fundamental components of crude oil and gas–with even greater pressure and heat. These hydrocarbons seep through rocks and natural formations, effectively transforming them into oil wells.

Did dinosaurs really have feathers?

The answer to that question is… a little complicated.

Most of the feathered dinosaurs we know of were theropods, a group that includes well-known carnivores such as Tyrannosaurus rex and Velociraptor mongoliensis. Theropods fall under the saurischian (“lizard-hipped”) half of the dinosaur family tree. Meanwhile, researchers thought that the other half, the ornithischians (“bird-hipped”), didn’t have feathers. (Don’t let the names confuse you: The fossil record shows that birds evolved from the saurischians.) However, at least two ornithischian dinosaurs (Psittacosaurus and Tianyulong) had bristle-like filaments structurally similar to feathers. 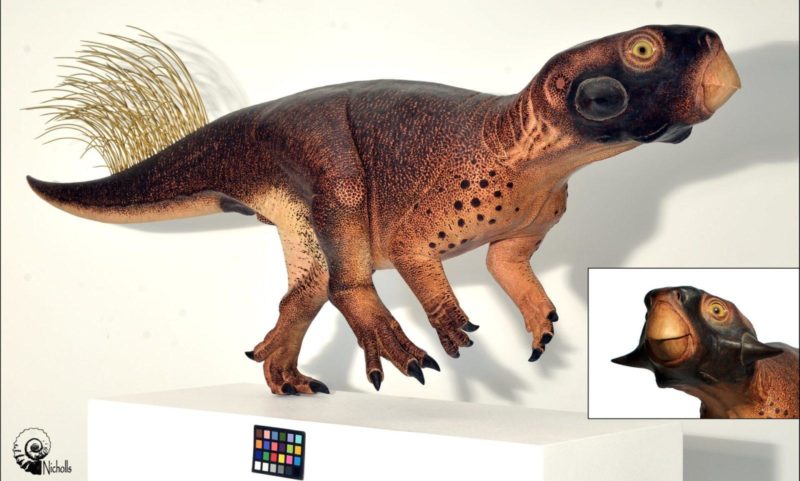 A model of Psittacosaurus based on fossil evidence; experts say it is the most accurate reconstruction of a dinosaur so far. (Image: Robert Nicholls)

Basically, we’re sure that some dinosaurs had feathers, but there’s evidence suggesting that all dinosaurs may have had at least some kind of fuzzy or bristly covering.

Were there any dinosaurs in the Philippines?