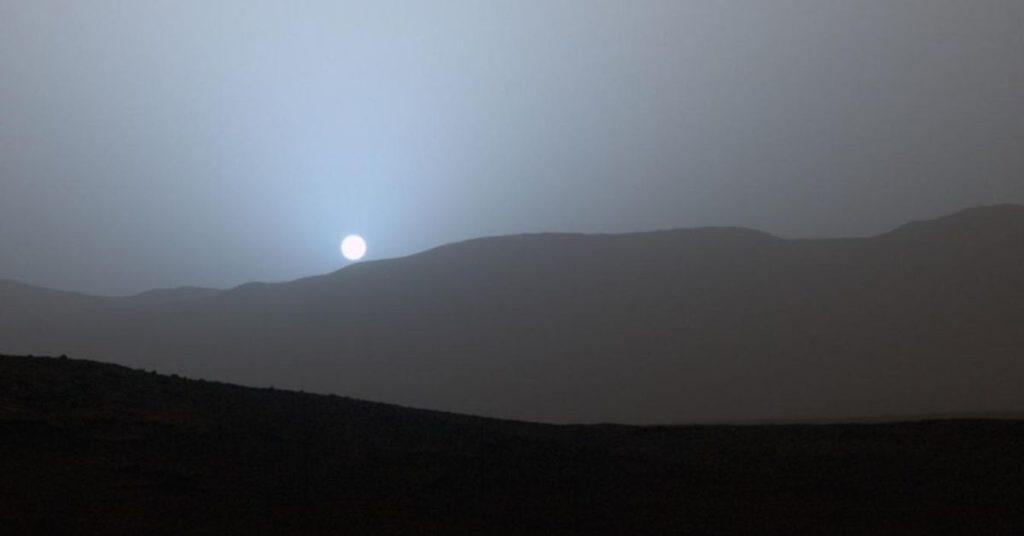 FlipFact of the Day: It is the year 2050, and your heart is racing. It’s extremely cold where you are; thankfully, your suit is there to keep you warm. You make your way through the jagged rocks and reddish soil, searching frantically for a good spot. To your delight, you find a flat, elevated surface among a cluster of small boulders. You quickly sit down, in awe of what’s unfolding in front of you. It sinks in once again: You are on Mars, and you are witnessing a blue sunset with your own eyes.

Sunlight is made up of light with different wavelengths; light scatters when it hits particles smaller than its wavelength. Blue light travels in smaller, shorter waves; when it encounters the particles in Earth’s atmosphere, it’s scattered all around, becoming the color we see most. (Violet light actually has the shortest wavelength, but the Sun emits a higher concentration of blue light, and human eyes aren’t very sensitive to violet light.) As the sun sets, its light travels a longer distance to reach us. By the time it reaches us, all the blue light has already been dispersed. Only the longer wavelengths (red, orange, and yellow) are left for us to see.

However, Mars’ atmosphere is much thinner than Earth’s, and also extremely dusty. The particles suspended in Mars’ atmosphere are large and rich in iron oxide, which absorbs light with shorter wavelengths. That’s why the planet’s sky usually ranges from reddish to dark yellowish-brown in photographs taken by NASA’s rovers at different Martian locations.

A day on Mars lasts 24 hours and 37 minutes—less than an hour longer than Earth’s—which means sunrises and sunsets on the Red Planet follow the same rhythm as the ones here on our Blue Marble. However, because the Sun is farther from Mars than Earth—about 142 million miles (229 million km), compared to Earth’s 93 million miles (150 million km)—the Sun looks only about two-thirds as big as it does on Earth, and its sunlight is less intense. Thus, as red light scatters across the sky during Martian sunsets, dust particles in the direction of the Sun scatter blue light, giving it a bluish glow.